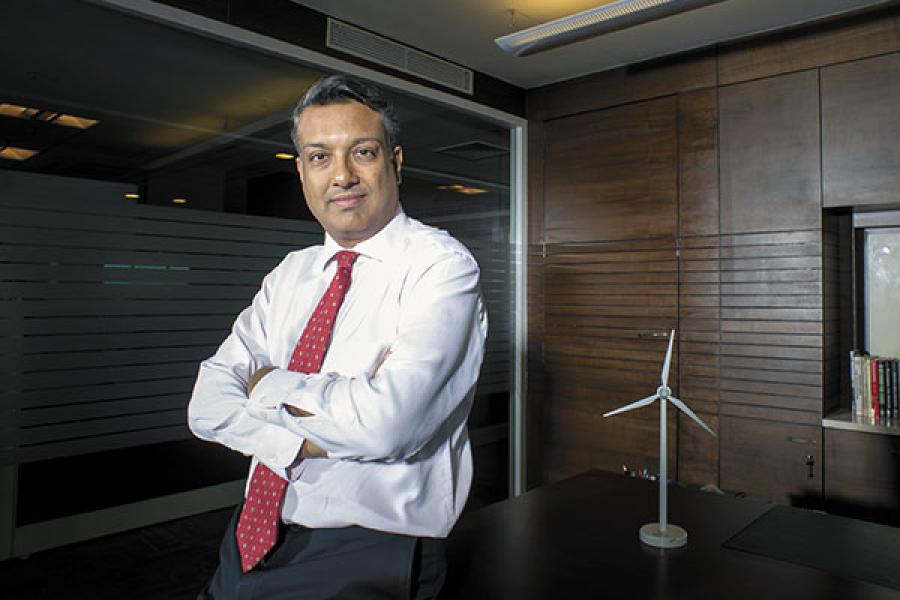 There are two key sectors that are attracting investments in India at present—clean energy and startups. ReNew Power, a five-year-old independent power producer (IPP), ticks both the boxes, and another very important one: It is profitable.

Based on the value at which ReNew raised its latest round of funding ($265 million in October 2015 from Abu Dhabi Investment Authority, Goldman Sachs and Global Environment Fund), the company is already a unicorn, an enterprise with a valuation of $1 billion or more. In April, ReNew Power became the first IPP to cross 1 GW (1,000 MW) of installed generation capacity.

Led by its founder chairman and CEO, Sumant Sinha (52), ReNew is representative of the potential that the Indian renewable energy sector holds, given the government’s ambitious target of setting up 175 GW of clean energy capacity by 2022.

Sinha, who was earlier the CEO of Aditya Birla Retail and the COO of Suzlon Energy before turning entrepreneur, is aware of the potential hazards. In an interview to Forbes India, he says that although the government is substantially increasing capacities, it is not enough to get anywhere close to the target. Edited excerpts:

Q. We have been speaking of renewable energy for quite some time, but it is only in the last couple of years that efforts towards creating large-scale capacities have accelerated. What took us so long?
There are two reasons for this. First, executing a project in India, given the challenges surrounding land acquisition, is difficult. The second issue was a constant flip-flop on policies, particularly in the wind power sector. But some of the latest initiatives taken by the present government, including providing land for solar parks, are addressing a lot of the past challenges. The third factor is a more recent phenomenon:

People regard solar power to be the next big thing for mankind and have piled onto it and become very aggressive. Consequently, tariffs have come down dramatically.

Q. The government has set a very ambitious target of achieving 160 GW of solar and wind energy generation capacity by 2022. Is it achievable?
In the last financial year [2015-16], India added 3,200 MW of capacity in wind power, which was the highest ever, and 1,500 MW in solar. This year, I think solar is going to reach 4,000 to 5,000 MW because of all the allocations [of projects through government tenders] that have taken place, and wind could add about 1,500 to 2,000 MW. So we will probably have about 6,500 MW of solar and wind power put together. But in order to meet the government’s target of 160 GW of registered capacity in wind and solar, we need to add almost 20 GW every year. Given the recent allocations, there is a possibility for solar to ramp up to about 10 to 12 GW. But there is a big question mark on wind. The government is definitely increasing capacities substantially, but it is still not sufficient to get anywhere close to the target.

Q. What is the potential for rooftop solar energy in India (40 GW of the government’s 100 GW solar energy target is rooftop)?
The rules for selling and getting paid for surplus solar power generated from rooftop facilities are not clear in most states. But the commercial and industrial tariffs in various states make sense to have rooftop solar facilities. Government entities like the railways and airports are tendering out rooftop bids. The total installed capacity of rooftop solar energy may be 300 to 400 MW. It will probably grow at 200 to 300 MW a year, so that in five to six years we may have 1,000 to 2,000 MW a year from rooftop.

Q. Why has the pace of capacity addition in wind energy dropped?
First, the solar power sector has become more competitive. Discoms [state electricity distribution companies] prefer solar because it meets their renewable power purchase requirement; solar power can be forecast, unlike wind, which blows strongly in the monsoon and during the night, both periods when power demand is generally low. Second, solar power prices have come down significantly.

Another reason is that until now, solar has received a lot of incentives in terms of exemptions from duties on equipment whereas excise and custom duty have been levied on equipment needed to generate wind energy. Consequently, there is a higher cost of production attached to wind energy compared to solar.

Also, none of the state governments are really giving any visibility on how much wind power they are going to buy in the future.

Q. There are concerns that the fall in solar power tariffs below Rs 5 per unit may not be economically viable and it may be the result of aggressive bidding by developers. What are your views on this?
I agree that Rs 5 per unit or a little less, say Rs 4.80 or Rs 4.90, is the tariff for solar power that works, and that too if you are able to secure financing at good terms. Even though we have managed to get funds at competitive rates, I would hesitate to agree to a tariff below Rs 4.80 per unit to execute a solar power project.

With the realisation that solar energy will be the next big thing in India, a lot of new players are attracted to this space and are bidding aggressively to secure projects. Tariffs below Rs 4.80 don’t fairly compensate developers for the execution risks they undertake while constructing a project. The power producers who are putting in these low bids are either being too aggressive or not pricing in the risk appropriately.

Q. What is the split between solar and wind energy capacity in ReNew’s portfolio and what is the outlook?
Currently, we have an installed wind power generation capacity of 880 MW and solar energy capacity of 160 MW. We have another 1,400 MW of capacity in the pipeline. Out of this, 1,100 MW will be solar and 300 MW wind. These are all projects won through bids from state governments. Most of the solar projects are time-bound and will be executed over the next 12 to 18 months.

So you can see that our focus is shifting dramatically towards solar. We will be implementing our projects to meet the deadline and will also look to add new projects to the pipeline. Fortunately, we have been able to raise capital [against equity] in advance and did not have to hit the pause button on capacity addition so far. This perhaps is the reason why we were the first IPP to get to 1 GW.

Q. Are you looking to raise more capital in the near future?
We have raised [a total of] $650 million from Goldman Sachs, Abu Dhabi Investment Authority, Asian Development Bank and the Global Environment Fund so far. Based on our last round of fundraising, we have already crossed $1 billion in market value. We have also raised close to a billion dollars of debt. If our pipeline builds out reasonably well, then obviously we will need money to fund it. As and when we win new projects and start executing them, we will look to raise more capital.

Q. Is it true that private equity (PE) investors aren’t too happy with the returns on investment in the renewable energy sector?
Nobody really has cashed out so far. So none of them have a full cycle of investment and exit to evaluate. But if you look at the project-level specifics, you can see the tariff levels people are bidding in projects and the returns they are making. I won’t be surprised if some of the PE players aren’t happy with what they are getting.

Q. Where is ReNew in terms of revenues and profitability?
We do not disclose those numbers. But our revenue and Ebitda [earnings before interest, tax, depreciation and amortisation] numbers are almost the same because we don’t have any real additional cost once the project is up and running. Typically, you should assume that any project gives about Rs 1.3 crore of revenue per MW [based on this assumption, ReNew’s installed generation capacity of 1,040 MW should yield a turnover of at least Rs 1,352 crore] and an Ebitda of Rs 1.2 crore. Each of our projects is profitable from day one and we are profitable at the net [post-tax] level.

Q. Does ReNew plan to go public?
As we look at our financing options in the future, this is something which we will consider. I think we have reached a size and scale where going public at a reasonable valuation is possible. As and when funding requirements come closer, we will sit with our board and take a decision.

Q. What is the key to sustainable growth for a renewable power project developer in India?
Having discipline around the projects that you execute and raising low-cost capital are crucial.