I am not in a rush to fly international out of India: AirAsia Group CEO Tony Fernandes 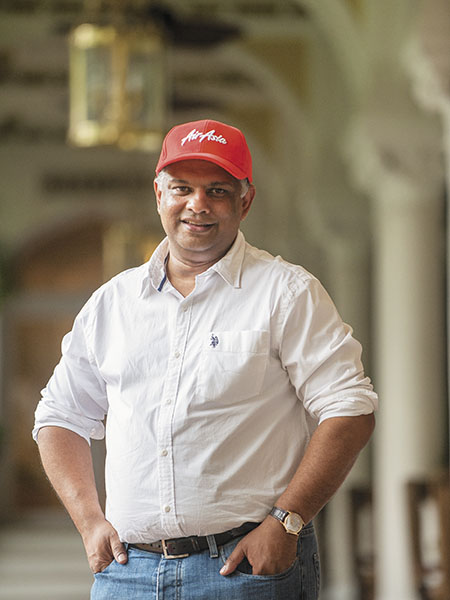 
Tony Fernandes, group CEO of Asia’s largest low-cost carrier AirAsia, has set his sights on integrating all of the airline’s operations in Southeast Asia into one holding company and creating a single airline entity that would represent the Association of Southeast Asian Nations (Asean) region. “If you look at it, we are probably the most successful Asean brand,” Fernandes, 53, says in an exclusive interview to Forbes India on the sidelines of the 52nd International Paris Air Show at Le Bourget. At present, the different entities of the AirAsia Group include AirAsia Berhad (Malaysia), AirAsia Indonesia, Thai AirAsia, Philippines AirAsia, AirAsia X, Indonesia AirAsia X and Thai AirAsia X. Outside of the Asean countries, there is AirAsia Japan and AirAsia India, which, since its start in 2013, has had a bumpy ride. “India is a country I don’t want to screw up [in]! I want to do it right,” Fernandes says, going on to talk about AirAsia India’s shift in strategy: From eyeing international operations to focusing on the domestic market. Edited excerpts:

Asean has approximately 700 million people and we [AirAsia] have created an Asean tourism market that was not there before. We are pushing Asean governments, saying we want to invest more in the region.

What we would like to do is create one holding company that would own 100 percent of all our airline companies operating in Asean countries. This would allow us to invest more, reduce costs and enable us to be much more efficient. And there is no reason why this holding company cannot be listed in all the Asean markets. Hopefully, in the future, there will be an Asean stock market.

Part one of my plan is to list our Philippines and Indonesia companies, which will happen soon. [The Malaysia and Thailand entities are already listed]. If it were left to me, and I don’t run countries, I would create an Asean holding company in two weeks!

Q. In recent months, you have gone on record to say that you are “driving AirAsia to be a digital airline”. How is this shaping up?
We are doing a lot of fintech joint ventures, which is also part of my one AirAsia plan. We are going to remove cash [transactions] off the plane soon with our own version of Alipay and PayPal. We will also have our own version [a digital platform] for money transfers.

We are working with Huawei on smart airports. I’m in favour of getting rid of check-in counters and looking at self-boarding. We are working on facial recognition, whereby passengers can board an aircraft using their face. And that will cover people with plastic surgery as well!

The worst experiences in flying are the airports, security and immigration—it’s a pain! We want visas to be electronic as opposed to going and standing in a queue. Surely, with all the data we have, we more or less know whether someone is a safe traveller or not. We are trying to create a trusted traveller programme and are working with Chinese, American and Australian companies to help us in this endeavour.

Q. Your India operations have been plagued by controversy and slow growth. What went wrong?
Many airlines have come, made a lot of noise in India and disappeared. It’s all about doing it properly and doing it right. For me, the India story is all about when a taxi driver who picked me up from New Delhi airport told me that it took him four days to go from the capital to Chennai. I was shocked. I asked him how much did it cost and what price would he would pay to fly, and he gave me a figure. We are about two-thirds of the way in making him fly.

There has been so much opposition to us, some of it our doing and some mistakes of our own.

India is not a simple country. It’s a complicated country and further complicated by very aggressive competitors. I have been in 10 other countries and we have never had this kind of reaction: The level of trying to get rid of us is much worse here in India.

Q. Can you elaborate on the ‘mistakes of our own’?
Well, actually, only one I think, which I don’t want to talk about. Everything else we have done well. We are three years old in India, that’s baby steps for an airline compared to Jet Airways that has been around for more than 20 years. I’m really happy with the way we are going. We have 10 planes now and will get to 20 aircraft next year. India is a country I don’t want to screw up [in]! I want to do it right.

Q. What are your plans for flying to international destinations from India?
Initially we thought we couldn’t make money in the domestic market, but now we know that we can. I thought domestic was crowded and we were late into the game. But we are not. In some markets, we are leaders. We are the lowest cost airline—we are lower than IndiGo, which is quite impressive. So, international is not such a rush for me anymore. But when it happens, which would be sometime next year, we would offer a good mix of domestic and international routes.

Q. Asean apart, would you like to own 100 percent of AirAsia India given that the Indian government has given you an overseas citizen of India (OCI) status?
I never really looked at that. It never should be me personally because there should not be any conflict of interest. It should be AirAsia that should own 100 percent. To that effect, I would like to see the rule that allows foreign airlines to own up to 49 percent in an Indian airline changed. At the moment we have no reason to change (the shareholding structure of AirAsia India). We are getting along well with the Tatas. But of course as an airline, it is my core business, it’s not the Tatas’ core business. They have several other businesses. If I [AirAsia] could own 100 percent, why not?

(The writer travelled to Paris at the invitation of AirAsia)