ISRO's Very Own GPS is Ready

Isro is sending up its own set of satellites, which will co-exist with GPS 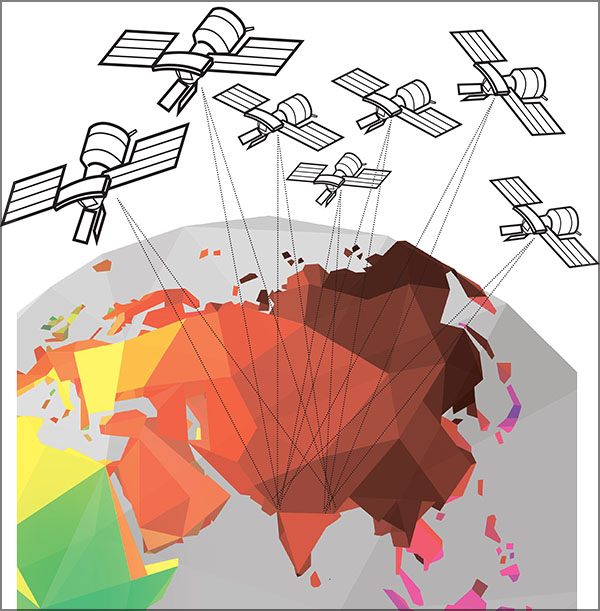 Image: Getty Images and Illustration: Sameer Pawar
Speeding down a highway or steering through the city lanes, if you tap your smartphone or in-car navigation device to locate a fuelling station, ATM, McDonald’s, or the good old dhaba, the one service you rely on is the global positioning system (GPS). This stable clock in space is a set of satellites that beam radio signals to receivers on earth. Without it, flights cannot operate, communication networks won’t function, drones can’t fly, nor can bombs be dropped. In short, this dual-use technology is the global utility that the world has come to rely upon.

To ease India’s dependence on America’s GPS and even to some extent on Russia’s Glonass, the Indian Space Research Organisation (Isro) has built its own geo-spatial positioning system, a regional one at that, and called it Indian Regional Navigation Satellite System (IRNSS). If all goes according to plan, the first satellite in this series will go up on July 1. By early 2015, all seven satellites in this constellation will be up there, 35,000 km above the earth, to make the system fully operational. It will provide an all-weather absolute position over the Indian landmass and 1,500 km beyond its geo-political boundary.

With 32 satellites in orbit, GPS pretty much serves as the global reference. The US doesn’t share military grade signals with countries but civilian signals, in L1 (1575.4 MHz) and L2 (1227.6 MHz) frequencies, is free for all. But as is true with all innovators, it’s believed the US practises ‘selective denial’. In times of war, and sometimes even otherwise, the signals can be corrupted. Isro Chairman K Radhakrishnan says, “During the Gulf War, signals from some satellites were interrupted.”

Amid such uncertainties, when the default control and navigation systems in defence projects are equipped with GPS devices, a country’s security rides on these radio signals whose control lies elsewhere. For this reason, in its upgraded BrahMos missile, India has added Glonass receivers to the standard GPS receivers because Russia, unlike US, gives access to military signals.

“India’s IRNSS is a regional system, not meant for offensive but defensive purposes,” says Wing Commander Ajay Lele at the Institute for Defence Studies and Analyses in New Delhi. Military use is important but essentially, says Lele, 95 percent of the data one gets is for civilian use.

India had initially planned to participate in the European satellite navigation programme Galileo, which has run into delays and cost overruns. Moreover, India wasn’t able to secure military grade signals from the European programme. So the choice finally rests in building its own system. At a modest cost of Rs 1,420 crore, IRNSS has turned out a programme that the world is keenly watching.

From the time the project was sanctioned in July 2006 to July 2013, when the first launch will take place, it’s been an exploration. “From defining the signal structure to fixing ground infrastructure to determining the measurement system, everything had to be done ab initio. We didn’t know how to do this,” says AS Ganeshan, programme director for satellite navigation at Isro. While other global systems have their satellites placed in middle earth, at a height of about 20,000 km, Isro chose to go up another 15,000 km. In that orbit, choosing how to place a minimum number of satellites at what degrees so as to cover the entire Indian region was a challenge, says Ganeshan. The team went through about 100,000 combinations, he says.

One of the hallmarks of Isro programmes is their cost effectiveness. Its most-trusted rocket, Polar Satellite Launch Vehicle (PSLV), is being used to launch these satellites. All seven satellites are identical and need to be launched in an orbit which has traditionally required a different class of rocket, one that launches its heavier communication satellites. “We worked with very compact designs which allowed us to use PSLV and this has kept the cost very low,” says N Prahlad Rao, director, Satellite Communication & Navigation.

But the heart of IRNSS lies in the master clock. “The Americans, the Europeans… all have their standard time. We also had to establish our own standard time,” says Ganeshan. A master clock provides the timing reference for the generation of the navigation signal. This atomic clock maintains accuracy of better than 20 nano-seconds with respect to any universal time. It provides stability of 0.4 or 0.5 nanoseconds variation in a day. “Tomorrow this becomes the reference for providing service to the user,” says Ganeshan.

It’s Users All the Way
Google and Apple may have killed the portable or standalone GPS devices, making the phone the always-on location finder, but the service itself is poised for rapid growth. The worldwide market for navigation and location-based services is estimated to grow to $13.4 billion in 2014. There’s no precise number for the Indian market, which is estimated to be less than $500 million, but its acceptance is increasing. Unlike the West, which started with GPS tracking devices and then moved to smartphones, India is taking the reverse route. Every smartphone is a GPS receiver today and by the end of 2013, nearly 67 million people will be its users in India. The sheer size of the potential market is impressive but the usage is not.

In India, there’s been quite a revolution in the use of digital maps, but commercial value has not been created, says Rakesh Verma, managing director of MapmyIndia, a GPS navigation solutions and digital maps company. His company has mapped almost the entire ecosystem—from geographic information system solutions to navigable maps, navigation devices to phone and tablet apps to the last mile connectivity with house level maps.

One reason for less-than-expected growth, says Verma, is that some companies have created the “perception that location-based service is free, which it is not, and that has hindered its expansion”. “These companies make location-based services free by subsidising it by other accounts,” he argues. (Without naming Google, he’s taking a dig at it.) Still, the question to ask is: Will having an Indian positioning system in orbit help?

Industry would want to watch the stability of IRNSS before influencing manufacturers to incorporate its signals. While service providers like MapmyIndia will have no issues running their solution on one signal or the other, it’s the manufacturers of devices, be it phone or receivers, who need to take a call whether they want to add IRNSS with GPS and Glonass.

Some of them are already looking ahead to it. “We have developed receivers compatible with all existing systems, so we are certainly keen to add our IRNSS signal to the existing solution,” says Vyasaraj, senior manager at Accord Software & Systems, a Bangalore-based company that makes GPS receivers and other solutions for Global Navigation Satellite Systems.

One of the advantages, he says, is that IRNSS supports two signals in L5 and S frequency bands, which correct the error that creeps in due to the ionosphere. It is a region in the upper atmosphere with a high concentration of free electrons due to solar radiation and impacts radio wave transmission. All other global systems operate in L1 and L2 frequencies. Because of this, says Vyasaraj, reliance on the civilian signal will be better than other existing operational systems during “disturbed times”.

Reliability is also ensured in times of cosmic events like solar flares that are common in the 11-year solar cycle and sometimes damage the satellites.

Vyasaraj rules out manufacturers having any hesitation in making their devices compatible with IRNSS signals. From the design and global competition perspective, he says, receiver makers follow “all-in-view” feature, which means, all good devices should be able to work with all the signals that come from the satellites in orbit, irrespective of their nationality.

All this doesn’t mean Isro’s task ends with the satellite launches. Verma says it should create awareness and support the industry through seminars and technology symposiums. “It will create both pull and push effect.” On the technological front, challenges may arise in miniaturising the receiver antenna for S-band, a frequency never used for this purpose before.

Engineers also fear that since Indian satellites will be at a pretty high elevation, they may not lend themselves for indoor applications.

These can at best be termed teething issues, which Isro would perhaps be keen to address in its own interest. In the US, GPS is under attack: Not only are its satellites aging but even next-generation mobile broadband services are vying for a piece of the electromagnetic spectrum that GPS uses. “The fear with other systems is that any day they may be switched off, but with IRNSS, we don’t expect it to be switched off,” says Vyasaraj.

India should also attract other countries in the region to use IRNSS. GPS is a success because the whole world uses it; even China is making its system, Compass, commercially available, says Lele. “At some point India needs to use its space faring abilities as soft power.”