The challenges of selling groceries online remain, but some players are using different business models and technology to overcome them 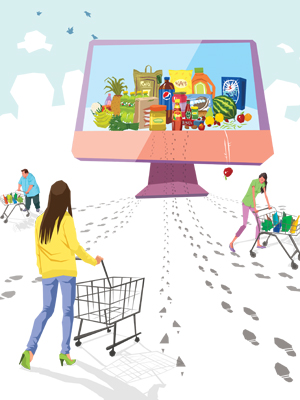 The buzz around online retail in India has reached a new high in the past few months, beginning with Amazon entering the fray in June 2013: There was the Rs 2,000 crore Flipkart-Myntra deal in May followed by the fresh infusion of funds ($2 billion for Amazon in India and $1 billion for Flipkart) in July, and Ratan Tata picking up an undisclosed stake in Snapdeal in August. The players are getting big, the money bigger.

What is significant, however, is that most online retailers in India sell books, electronics, apparel and accessories whereas groceries—which form the bulk of traditional brick-and-mortar-retail, a giant 60 to 70 percent of it—form a miniscule part of the total online retail space, which is worth $2.3 billion. And, there’s good reason for it.

Selling perishable goods online is far more difficult than selling non-perishables; storing and supplying fresh tomatoes is an entirely different ball game from storing and supplying cellphones. Online grocery stores are up against age-old local grocers who have built their loyal customer base on trust, reliability and quick, customised service. Selling groceries is a low-margin business (margins below 10 percent) although it requires expensive investments to build high-end IT infrastructure, an efficient supply chain, quality warehousing and storage facilities, and an efficient delivery system.

Consequently, investor sentiment remains unenthusiastic. Although BigBasket attracted a funding of $10 million from Ascent Capital in 2012, and more recently, Rs 200 crore from Helion Venture Partners and Zodius Fund II with Avendus Capital, others have received far smaller amounts or none yet.

Rahul Khanna, managing director of VC firm Canaan Partners, says investor interest is tempered by caution. “Understanding local needs across different cities has been a challenge. Mumbai is very different from Pune, let alone Delhi. How relevant are lessons from Mumbai in Pune or Bangalore? You almost have to create unique fulfilment, delivery models in each new city.”

While Canaan is yet to invest in any grocery e-commerce player in India, it has backed San Francisco-based Instacart, which provides a floating supply of grocery pickers and packer-delivered convenience at a premium.

An investor, who’s backed one such Indian firm, says all models in the e-grocery business today are capital-intensive. “These companies have to have a national presence to give people like us a meaningful outcome [exit],” he says, requesting anonymity.

However, in the shadows of the giants of Indian online retail, there’s a mushrooming of numerous online grocery stores that are experimenting with different business and delivery models: Dozens of them have set up shop in the past few years. Examples include BigBasket, LocalBanya, ZopNow, EkStop, AaramShop, MyGrahak, VeggiBazaar, Fresh N Daily and Farm2Kitchen.

Many of these are hyper-local, catering to single cities, sometimes even to only certain neighbourhoods of a city.

According to retail consultancy Technopak, the online grocery retail market is growing at 25 to 30 percent in the metros and other large cities in the country. “Urban India’s increasing shortage of time is fuelling the growth of online grocery,” says Pragya Singh, associate vice president, retail and consumer products, Technopak. “It is a largely standardised category; it doesn’t require much touch-and-feel as, say, apparel. Hence, online works fine. And it is highly convenient.” 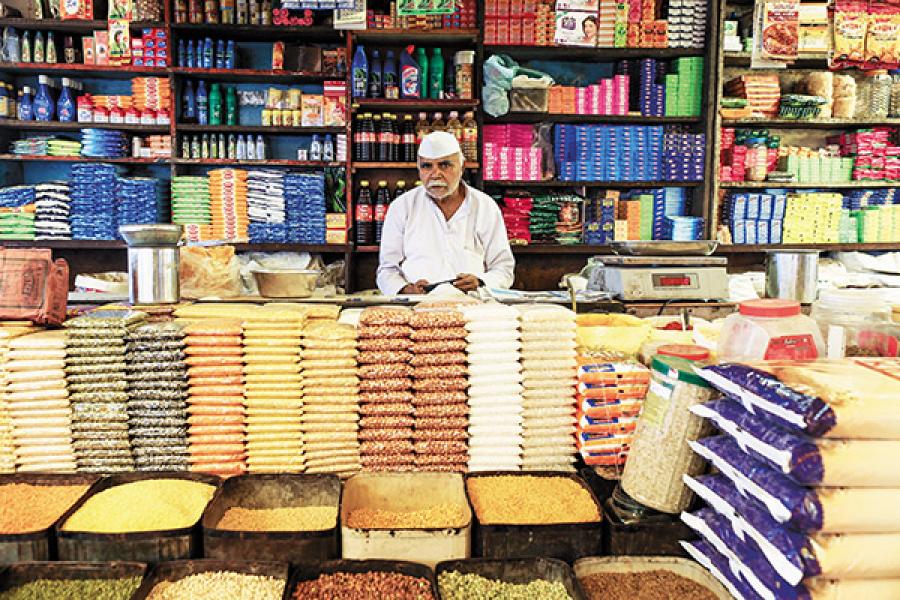 Image: Getty Images
Online grocery stores are up against age-old local grocers who have built their loyal customer base on trust, reliability and quick, customised service. Many of them are now trying to rope in local grocers to expand their business and meet the growing demand apart from ensuring speedier deliveries
Forbes India takes a look at three online grocery retailers that have developed business models that have been more successful than most others.

BigBasket
Founders: VS Sudhakar (who had founded FabMart.com in 1999), Hari Menon, Vipul Parekh, VS Ramesh and Abhinay Choudhari

Cities it covers: Based in Bangalore; expanded to Mumbai and Hyderabad in 2013; aims to cover two more cities in a year
Funding: $10 million from Ascent Capital in 2012; Rs 200 crore from Helion Venture Partners and Avendus Capital

Target: Earlier in September, BigBasket announced that it had crossed a million orders since it started three years ago. With an average of 5,000 orders a day, it is now looking to go up to 15,000 orders across five cities a year from now.

Challenge: “A normal non-grocery e-commerce basket contains one to three items. On an average, we deliver 24 items [per basket], including heavy items like 5 kg of sugar, 5 kg of flour and 20 kg of rice,” says Sudhakar.

Solution: The long-term solution to this problem of weight and volume may lie in a hybrid model in which lighter items are shipped nationally (inter-city), whereas provisions such as rice and pulses are delivered locally.

BigBasket sources from local vendors and stocks goods in its own warehouses. However, relying on vendors’ stock-keeping alone would be able to fill only 70 percent of each order at any given time, so Sudhakar uses algorithms to pre-empt the need for certain items and buy them in advance, thus claiming a 99.3 percent fill rate.

The company has about 11,000 stock-keeping units (SKUs) and is looking to increase it to 20,000 in a year. It is also increasingly automating deliveries: It has developed algorithms to manage delivery routes and determine traffic-free ones to ensure speedier deliveries.

Opportunity: “My potential market opportunity from just the top 10 cities alone is the same as any other [online retail] category across the whole of India,” says Sudhakar. This is reason enough for him to not look beyond the biggest cities, and spread himself too thin. And this might be the right strategy because “grocery is a hyper-local business, where you establish yourself in one catchment area before moving to the next,” says Technopak’s Singh.

Funding: Undisclosed investments from Springboard Ventures, and Karmvir Avant Group. In talks for a second round of funding of $5 million.

Target: Institutional clients (restaurants and eateries) account for a third of its business; senior citizens and NRIs another 16 percent. LocalBanya now gets about 750 orders every day, and is targeting 1,000 by year-end. It claims to be growing at 30 percent month-on-month, has a fast-expanding vendor network, and an improving basket-size (number of items in every order).

Challenge: CEO Karan Mehrotra hasn’t forgotten the tough times when LocalBanya started out. “Initially, the challenge was about acceptability. We were still trying to sell the idea of online grocery to customers and vendors. Now we have about 300 to 400 vendors supplying us.” But the “perishable nature” of groceries continues to pose a challenge, he says.

Solution: It has developed a lean business model that relies on a combination of direct sourcing (from farmers and the Agricultural Produce Market Committee), warehousing and cash-and-carry for procuring its stock (it now has 8,000 SKUs).

Outsourcing various requirements has also cut costs, resulting in margins of up to 20 percent. Mehrotra says, “Tying up with specialist companies at various steps of the value chain has helped us reduce the cost burden. Financially, we are freer.”

What it has kept for itself are the supply chain and technology infrastructure. It is investing in inventory management and focusing on customer-retention. “Grocery is a high-purchase category; you need groceries every week or every month. Hence, getting a repeat customer is easy,” says Technopak’s Singh.

Opportunity: With a high-order fulfilment rate, a healthy balance sheet and a fast-growing target market, LocalBanya might be well-placed to break even by next year.

Target: Singh is keen to explore a hybrid model now where the company partners with large retail chains like HyperCity as well as local vendors. It currently stocks about 10,000 SKUs.

Challenge: Sourcing and warehousing goods with minimal involvement while continuing to focus on technology and delivery. CEO Mukesh Singh is also cautious about how the market is evolving with a host of multi-channel players coming into the space. “The future isn’t just about being online or offline, but things co-existing in a hybrid model,” he says.

Solution: “We think of ourselves as a technology company [that is] building a platform for more people to come and sell products online,” says Singh. By tying up with the HyperCity chain, ZopNow can leverage HyperCity’s storage and sourcing strengths. In its first pilot project in north Bangalore, HyperCity sources goods that are listed on ZopNow; ZopNow then identifies a HyperCity outlet and deploys a team for pick-up, packaging and delivery.

Opportunity: What separates ZopNow from other online retail grocers is its “three-hour delivery” promise. Now, streamlining the business by forging new kinds of partnerships with existing online and offline retailers is its focus.