Public sector banks are a true reflection of confidence in our economic revival: Anoop Bhaskar

The volatility of the markets put many investor assumptions and expectations to test, says Anoop Bhaskar, head-equity at UTI AMC 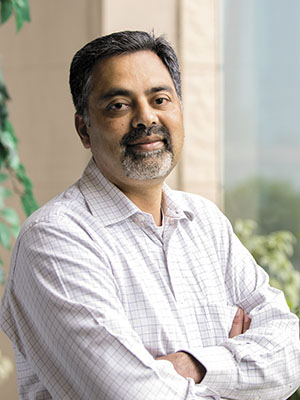 Image: Mexy Xavier
According to Anoop Bhaskar, in the last two years, stock selection has become as important as sector selection

Q. How do you look at the market over the last two years? Did you get spooked by its behaviour?
If you look at it from September 2013, we were coming through a fairly bear cycle for mid- and small-cap companies. These segments have given negative returns for two years in a row. Yet, these stocks did well later on. But growth in the market became scarce. Over the last four years, Nifty growth earnings have been less than 7 percent. Compare that to the 15-year growth average of around 15 percent, and you will understand that this market has not seen growth.

The price divergence between the best performing stocks in the same sector has also increased. That was not the case between 2003 and 2008. Earlier, you just had to get the sector right because the difference between the stock valuations was not much. In the last two years, not only sector selection but also stock selection that has become important.

For example, in the banking sector, between Yes Bank and ICICI Bank you can see a huge difference in returns over a two-year period. Our belief was that if the economy recovers, then corporate banks will also recover. But your stock selection is defining your returns. This is seen across sectors. Growth has become limited. Investors have focussed on companies where growth has been more consistent. There is a premium being paid for growth.

Q. Your large-cap funds did not perform as expected. Why?
Actually, what worked in 2011-12 has not worked in 2013-14. It is quite remarkable. Between August 2011 and August 2013, at a fund-house level, we had 30 percent of our money in large-caps in the first quartile of the market. We did really well.

Between August 2013 and August 2015, things were not so great. It can’t be that you are a good stock picker in one period and totally fail in the next. While we have focussed on the medium-term and overlooked the short-term, the market has focussed on short-term and overlooked the medium-term. When growth is limited, investors focus on near-term growth. When growth is easily available, investors should focus on growth in the medium-term rather than the short-term. The pressure to find growth in your portfolio will be much less.

Q. How do you look at your past performance now?
We had this hypothesis in 2013 that a 1 percentage point improvement in GDP growth rate will make growth universal across sectors, and variance between stocks in the same sector will fall. We thought growth would come back in 2015. But it did not. Now, to chase growth at elevated valuations doesn’t make sense. We would rather take the pain and wait for three more quarters.

Q. How have the top holdings been affected?
We are more large-cap focussed, and we haven’t been as flexible as our peers in chasing our outlooks and our portfolio. In terms of positions, our assessment of growth needs to be questioned. We thought growth will come faster. And that is how we justified our portfolio. We did miss some sectors like downstream oil and defence.

We also missed Bharat Petroleum and Hindustan Petroleum. Post March, our view was that refining margins was a play on the oil prices. So if oil prices are to come down, say from $70 to $45 [a barrel], refining margins should come down proportionately. But it happened with a one-quarter lag. In that quarter these two stocks went up 15 percent [equivalent to a one-year return of the market]: So if you discount one quarter, you miss one-year returns.

Our view was that there is a housing market correction. We told investors that real estate as an asset class has peaked but when it comes to deploying stocks related to the real estate sector, we are still caught in a time warp. The smaller housing finance companies are robust and some of them trade at a premium compared to HDFC. The view is that if the sector itself has peaked and will slow down, all related sectors should see a correction. But when you look at the stocks related to real estate, they have not seen any corrections. For instance, paint companies are still at 52-week highs.

Q. But public sector banks are really hurt. How do you look at this segment?
If there is a bombed-out sector, then it has to be that of PSU banks. The worry is that they are like an iceberg and what has been reported is lower than what has not. They are a true reflection of the confidence we have in terms of the revival of the economy. If the revival becomes much more apparent and evident, then these stocks will move up very fast. Right now nobody is ready to take this bet. Value is a dangerous trap to play into in this sector.

Q. What do you make of the argument that India is a good buy as the macro economic picture has improved considerably?
India has always been pitched as having bad macro, but it has some great companies. It was a stock picker’s delight. But today Indian corporate numbers have not held up—Nifty has only had a 7 percent CAGR of profit. So now India is a great macro country with poor micro. It is a reversal. Today there are very few companies that you can confidently say will grow by 25 percent for the next five years. For India to become really attractive, it must have great micro stories as well as macro.

Q. What should an individual investor do now?
Someone who is not in equities should use this period of correction to get in. And those who are already in equities should review what sort of allocations they have got into. More than 50 percent of flows have been in mid- and small-caps; there has been an over allocation in these. It has become a self-fulfilling prophecy; these stocks have done better because they have got more money. That has to be reviewed by the individual investor.