Many of India's railway bridges are over a century old and need rehabilitation, which is more than what the cash-strapped Indian Railways can handle 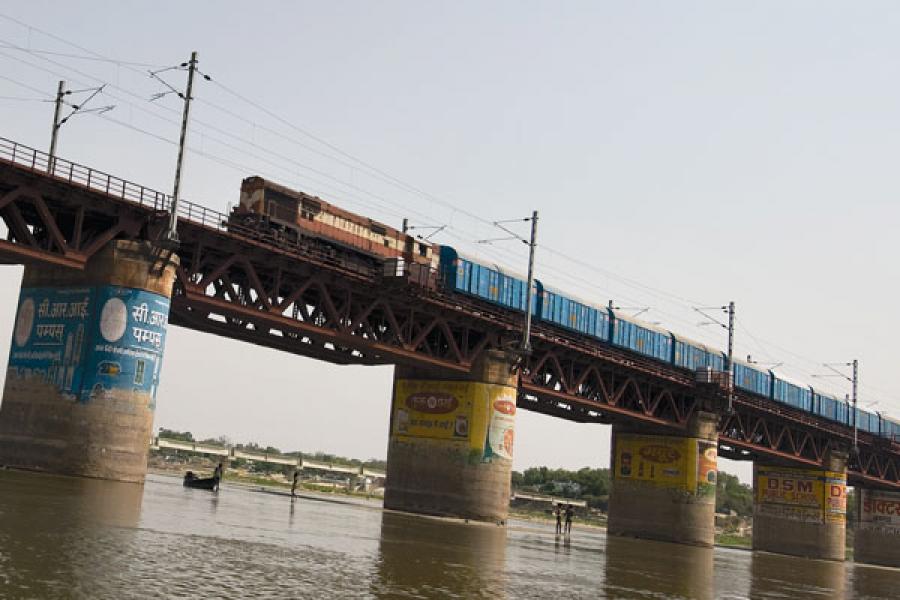 Image: Amit Verma
A RELIC: The Ganga Bridge at Kanpur which was tested by the RDSO

Rakesh Chopra knows a thing or two about boxing, having been in the ring in his younger days. “Here’s a tip. If you get punched once or twice on the shoulder, it would hurt. But if in a bout, you are hit 20 times on the shoulder, that can be severely damaging,” says the former head of Indian Railways’ (IR) engineering directorate. The same is the case with the railway bridges on IR’s gargantuan network, he says. There is a point beyond which the bridges will simply not be able to endure the stress of faster and heavier trains.

And since 2007, with Lalu Prasad Yadav’s grand plans to generate more revenue, the century-old bridges have been taking a further beating with the axle load raised to a maximum of 25 tonnes. It’s no wonder then that the Railways has assigned teams to test and retrofit bridges such as the one in Koraput, Orissa. The last thing IR needs is to be plagued by another train accident due to bridge collapse.

The railway ministry has never openly acknowledged that there is a problem with its bridges. In Parliament, whenever questioned about the health of its bridges, the ministry has gone into a defensive mode, claiming everything was under control. However, at a conference held in Secunderabad earlier this year, perhaps for the first time in an internal meeting, senior ministry officials let the cat out of the bag. They admitted that the bridges need closer examination.

The irony was not lost on the engineers who were attending the conference to celebrate the engineering wing’s achievements. It included the top brass — S. Jayanth, general manager of South Central Railways, A.K. Goel, chairman of the Bridges and Structures Committee, and Pradip Kumar, assistant general manager of South Central Railways — all of whom were aware of the gravity of the situation.

They now have the Herculean task of testing and retrofitting decrepit bridges across the country. It is a huge challenge considering IR has more than 36,000 bridges that are over 100 years old. Does the Railways have the resources to pull off such a mammoth task, especially when its finances are in a mess? And what about the safety of the passengers till the work is completed? These questions are answered with an uncomfortable silence by the concerned authorities.

“With the introduction of progressively heavier axle load trains and high horse power locomotives, bridges are being subjected to much higher loads than the original design loads. Hence, the main challenge for bridge engineers today is to assess the strength of the existing bridges and retrofit them to enable them to carry the enhanced loading,” said a delegate from the railway board. The national transporter needs to carry higher loads to improve its financial performance and efficiency. With the century-old bridges falling apart, it is in a catch-22 situation.

A team from the Research Design and Standards Organisation (RDSO) earlier tested the Ganga bridge near Kanpur and the Narmada bridge on the Itarsi-Jabalpur line. While testing two bridges — relics from the Raj — on the Manasi-Saharsa line, the RDSO found major construction flaws that had caused the bridges to crack. “Visual observations give a clear sign of honeycombing and poor quality of concrete,” says the RDSO field report.

The Shaky Bridges
It is unclear whether “poor quality of concrete” can be blamed for the collapse of Bridge 924 that caused the tragic Kadalundi train accident in 2001. The accident killed more than 50 people when four carriages of the Mangalore Mail derailed and plunged into the Kadalundi river in Kerala. The bridge was more than 140 years old. The accident was also a wake-up call for the IR on the condition of its antiquated bridges. Since then it has worked intensely to locate and repair dilapidated bridges.

But even as restoration work continues, collapsing railway bridges continue to be a thorn in the flesh for the Railways. In 2006, a portion of the 150-year-old Ultapul rail over bridge in Bhagalpur, Bihar, collapsed over a passing train when it was being dismantled. Thirty-five people were killed and 17 were injured. In October 2009, a bridge fell on a local train on the Thane line in Mumbai and killed two people.

Last year, when there were fears of the River Yamuna flooding Delhi, the Railways had to stop trains from plying on the Yamuna bridge for a while. Their major worry was that the swiftly moving water would compromise the integrity of the structure. “Such problems pertaining to the sub-structure are very common in places such as Kerala where a large number of bridges have to be inspected underwater. This is why a number of zonal railways have already started the process of underwater inspections,” says Chopra. 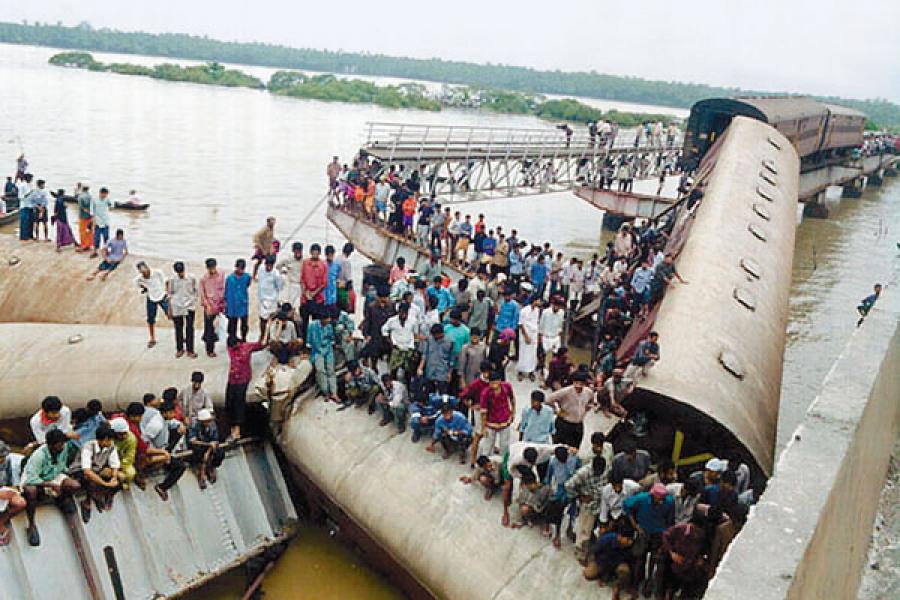 Image: Reuters
IT ALL COMES DOWN Wreckage of the train crash near Calicut, in 2001
All in the Name of Revenue
But why is the railway ministry now focussing on the bridges after ignoring it all these years? The ministry has pushed for extra loading even when doubts were raised over the condition of the bridges. During his tenure as Railway Minister, Lalu Yadav had once bragged, “A one tonne extra loading per wagon implied additional revenue of Rs. 500 crore per annum for IR,” when asked about the benefit of higher loading.

But behind closed doors, when his ministry made the proposal to increase the load limit, senior officers of the engineering wing had voiced their apprehensions. A railway officer, who spoke on condition of anonymity, says, “There were officers in the engineering directorate, as well as the RDSO, who had pointed out that there would be safety implications, which needed to be studied in detail. They said that the bridges need to be [examined] before going in for such measures. But the final opinion of the railway board then was that it was possible to enhance axle loading by improving safety.”

The engineering directorate had wanted more time to carry out trial runs before increasing the load. But an impatient Yadav and his team didn’t listen. The engineers could only watch when the railway board implemented his decision.

When the matter was brought to the notice of the chief commissioner of railway safety (CCRS), the CCRS had expressed its concern to the railway board. But the board insisted that all safety provisions had been adequately addressed. “The railway board — given that the ministry was run by a minister who was used to getting what he wanted — stuck to its stand and finally after a further round of deliberations and with some concern did the CCRS green signal the higher axle loading,” says the officer.

However, now the ministry has realised the condition of the bridges could be a dampener on its plans to double its annual load of freight from over 1,010 million tonnes (mt) in 2011-12 to 2,165 mt by 2020. This target is largely dependent on the opening of the Dedicated Freight Corridor project which would be adequately engineered to carry 32-tonne axle load and more. But given the problems with the Railways’ finances, the new freight network may not open for another seven years.

The ministry is working at a feverish pace to fix the existing bridges. Fifteen routes were identified to study the impact of extra load. “In some cases, a single trip by a train with wheel flats damaged tens of kilometres of railway track,” says an expert. Wheel flats is a condition where rail wheels lose their roundedness as a result of over-stressed interaction between the rail and the wheel on account of heavier load.

When asked how much weight the network can handle, RDSO engineers say that 25 tonnes would be the maximum, considering the current infrastructure. “On the regular lines of the Railways, at 25 tonnes axle load, yes, I think we may have hit the maximum for a while, until the bridges and tracks are strengthened to carry more,” says another expert. In spite of the limit, cracks have occurred primarily due to the problem of wheel flats.

At least in the case of tracks, the damage is clearly visible. In the case of bridges, damage can be assessed only after the sub-structure and the pillars are examined. In May 2009, a pilot project on the monitoring of bridges threw up some interesting facts. Twenty-three bridges were chosen for studying the effects on the superstructure. The stress on one bridge was 40 percent above the permissible limit. In three other cases, the stress was high at over 75 percent within the permissible value. When probed, authorities refused to divulge more details regarding these bridges. V. Ramachandran, the head of the RDSO, confirmed, “The railway board has asked us to look into this and monitor the bridges on a continuous basis.”

Cracks in the Network
But despite the new measures, the engineering wing’s conflict with the railway ministry continues. The ministry has plans to increase the speed of freight trains from 60-70 kmph to around 100 kmph. RDSO officers, who work with the Bridges and Structures Directorate, say that in several zones, speed restrictions had been imposed on freight trains with 25-tonne axle load.

“The maximum speed limit has been set at around 55 kmph for 25-tonne axle load, keeping in mind the [condition of] bridges, tracks and other structures,” says an officer. Experts say the ministry’s plans to increase the speed of freight trains would be another miscalculated move.

For the Railways, there are few other options to help it increase its revenue. For example, it can reduce the wagon turnaround time so that more freight trips can be made using the same number of locomotives and coaches. However, such options have their limitations. Speed constraints and the high density of traffic on the IR’s network will not enable this option to work.

Nevertheless, the ministry recognising the problem of the bridges is a giant step forward. It is also simultaneously updating the map inventory of its bridges. A proposal to set up underwater inspection teams to examine the bridges is also being considered on a priority basis. However, a former railway board member, R.R. Jaruhar, says that it is equally imperative to keep opening additional bridges at sections where the bridges have been in use for extended periods.

The Railways has also consulted a few private companies that have specialised solutions for retrofitting work. “The problem turns into a catastrophe when people do not admit there is a problem. But in this case, the Railways has admitted there is a problem and is steadily working towards tackling it,” says an engineer assessing the life of bridges. One can only hope that it tackles the problem quickly and effectively without risking any more lives.