Indian scientists are trying out a new climate model to get monsoon forecasts right. If they can get it to work, expect it to rain when they say it will 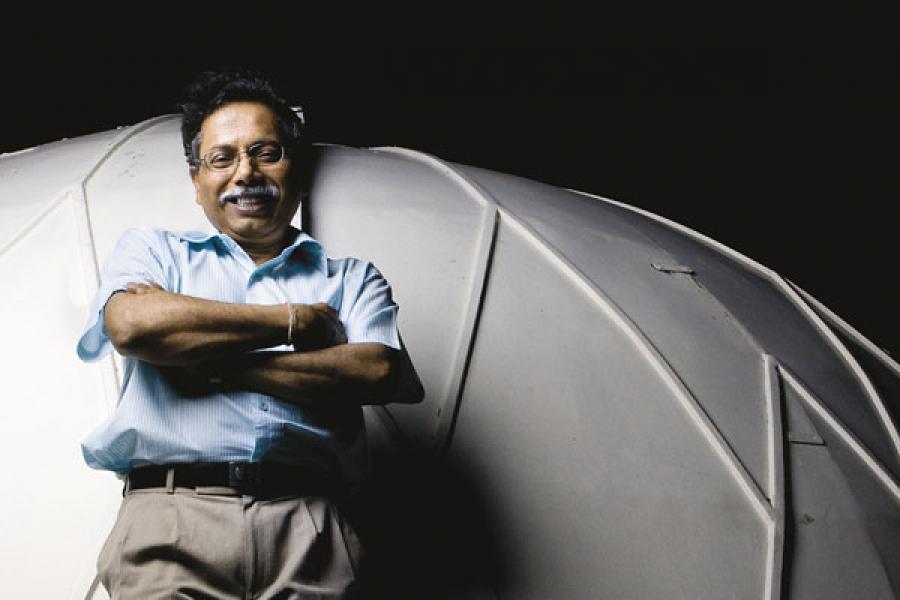 It was going along quite swimmingly till 2002 for the weathermen of India. The Indian Meteorological Department (IMD) forecast a normal monsoon for that year. As the season wore on, it became clear that the monsoon would be anything but normal. It was 19 percent below normal and India experienced its first drought after 1987. This resulted in a 12 percent decline in food production. Weathermen couldn’t explain why they had been unable to see it coming. “There was little understanding of what had happened. And different institutes had different explanations for the deficiency,” says M. Rajeevan, scientist at the National Atmospheric Research Laboratory.

Given that 65 percent of Indian farmers depend on the monsoon for irrigation, a failure of this kind has serious economic and political consequences. The IMD went back and checked its crystal ball — the climate model, a mathematical formula that incorporates a large number of factors that cause the monsoon and predicts the total rainfall in a season. IMD’s model took into account 16 such factors. This model was tweaked. Things improved in 2003 when IMD’s forecast more or less matched the real thing. But in 2004, the forecast went wrong again. Another drought hit the country.  Things have been up and down since then. After every year or two, the forecasts go awry. “When the monsoon fails, GDP falls by almost 2-3 percent. It has a huge cost on the agricultural sector. Even in 2009, agricultural production fell by about 7 percent from 234 million tonne in 2008 to 218 million,” says Dev Raj Sikka, an experienced meteorologist.
Say Hello to My New Friend
The government of India has had enough and wants the weatherman to get his mojo back. In India, there are more than 10 organisations that study climate. One of them, the Pune-based Indian Institute of Tropical Meteorology (IITM), has picked up the gauntlet. “Few institutes want to do it because it involves a lot of investment — in money, training of human resource and time,” says B.N. Goswami, Director, IITM. Goswami is 60 years old and stands maybe five foot four. He is light on his feet and scurries about the Pune campus to show off his Brahmastra. In a large building located 80 metre from his office sits the big IBM pSeries 575 supercomputer. It can do 18.8 billion floating point operations in a second. Goswami is now looking to hire more Ph.D.s who understand various aspects of climate and also programming talent to use the supercomputer to look into the future. 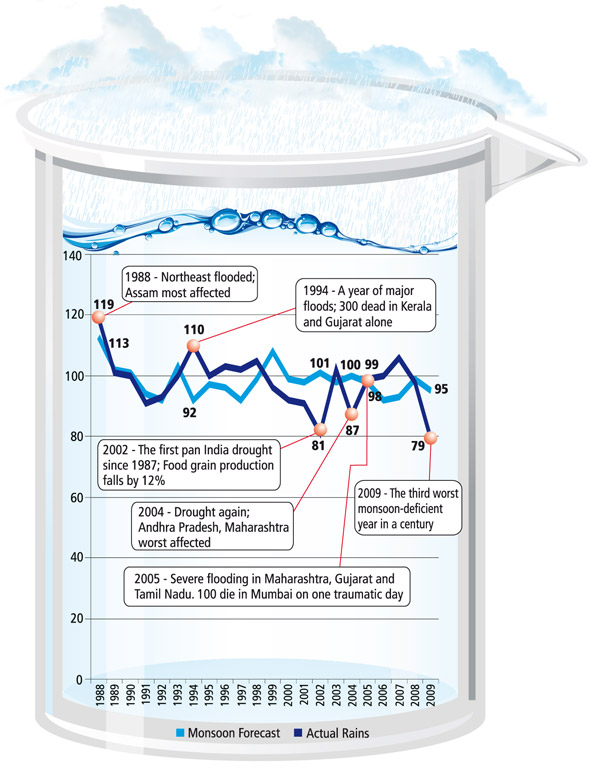 Infographic: Sachin Dagwale
But all the manpower and the hardware will be of little use if Goswami can’t improve the underlying logic of weather prediction. He is betting on a new method to predict the monsoon accurately. Scientists call it a ‘physical’ or ‘dynamic’ climate model. Since it is supposed to be more exact and rigorous, the ministry of Earth Sciences has agreed to foot the bill for the beast in IITM’s backyard. If Goswami can prove it works, this is the model that IMD will use for its forecasts.
Rough Weather
His enthusiasm is infectious but Goswami knows he is trying to do one of the three most difficult tasks known to mankind. The first task is predicting the stock markets. The second is anticipating the performance of the Indian cricket team. The key thing to understand is that the weather is a result of many different physical phenomena. Measuring them involves different levels of complexity — some are so difficult that it is mostly guesswork. For instance, evaporation as a function of wind speed and humidity, or fluctuations in the ocean. “There are many factors like that. So, what I am saying is that these are all physical processes which can affect our monsoons. Now, in order to predict, actually we have to model them. This is what you call a physical climate model. This model, in principle, is a model of the atmosphere which is nothing but the equations that will solve the motion of the air. Atmosphere is air, right! So ultimately, you have to calculate where there is more heat and less heat in the atmosphere,” adds Goswami.
The New ‘New Thing’
In the new method, Goswami’s team will come with mathematical formulas that will capture the interaction of these different physical phenomena. The formulas will divide the world into tens of thousands of grids of 100 sq km each. Each year, the team will put in fresh values of almost 100 different factors for each of these 100-sq-km grids. Then the man ‘o war, the IBM supercomputer, will crunch through millions of calculations to solve the mathematical formulas. When the last calculation is done, the answer left on the screen will be the amount of rainfall India will get in that year. OK, it might not be that simple, but you get the idea.
Now this is a radical departure from what meteorologists have been doing in India till now. The IMD, which is India’s official weather forecasting agency, has for years relied on what is called a statistical model, which is developed by using actual, historical data of rainfall over the last 30-40 years. For instance, IMD developed a statistical model in 2007 based on the last 30 years of data to make the forecast for 2008.Based on the data, weights or coefficients are assigned to several parameters that go into the model and that is used to predict the next season’s forecast. “Over the years the skill of these models in predicting the monsoon has gone down,” adds Goswami.
This is where the new model will be different. It will factor in the data for the current year and it will take into account any change in the relationship between the 100 or so factors that it will use to predict the climate. So, say, historically the relationship between temperature between the Bay of Bengal and land is one of the determinants of monsoon. Now say the emergence of a tornado in that region changes that relationship — the new model will take this into account. A Search for Truth
But don’t expect this to solve things immediately. The new model is far more complicated. “The main problem is, there are a lot of physical processes there which involves lots of calculations of fluid dynamic equations and this is not trivial,” says Goswami. But before that, the initial values (i.e., the current data, which can be as recent as data for the day) too have to be fed in and it is difficult for one to sit in India and get initial conditions from all over the world. That’s why, IITM has been talking about a new regional partnership modelled on the lines of what the World Meteorological Organization (WMO) did for Africa (see sidebar on page 57). But that is some time away.
At the moment, the most disheartening fact is that globally, the success rate of the new model is not very different from the old model. “A statistical model’s success rate is about 22 percent as compared to 24 percent of the dynamic model’s,” says Goswami. So why invest so much for such a small difference? Well, the new model is based on a more rigorous approach and much more fundamental science. So if Indian scientists can adapt and improve this model, the country will have a much better prediction system. 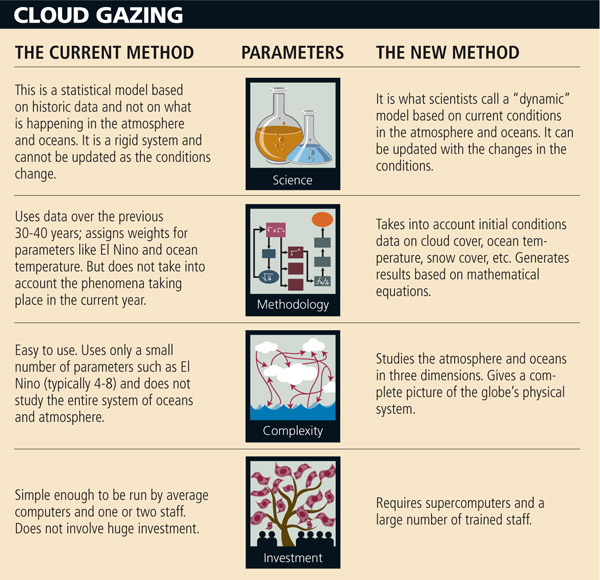 Infographics: Minal Shetty
IITM scientists are already on the job. They have taken the basic outline of the new model from the US and are now adapting it for India. US scientists had been using historical data for India to see if the model correctly “predicts” the monsoon for a particular year. For instance, they would feed in the parameters for say March 1, 1980 and let the model run till September 31 of the same year to see if the results were accurate for that year. This is called a hindcast. So far they have not met with success. “This model has been run in the USA for 25 years and the hindcast shows that its performance for predicting the monsoon/drought over India is a mixed one. Also, it did not predict the drought of 2009,” adds Sikka.
The biggest problem is that the climatic conditions in the Indian subcontinent change very rapidly. “But in tropical conditions there is a limit to predictability because things develop quite rapidly, which do not have prior signals,” says Rupa Kumar Kolli, Chief, World Climate Application and Services division, WMO. “The chaotic component is more in the Asian monsoon region,” adds Rajeevan. That means, unless the IITM scientists factor in those quick changes, even this model will fail. “If we try and do that, the number of calculations goes up many many times,” says Goswami, almost with a touch of helplessness.
Make Yourself Useful
Goswami’s challenge is that now that the government has given him the money for the infrastructure, expectations from him are even higher. Some want month by month forecasts. This will make the prediction more relevant to the end users. So, for instance, if farmers know in June that rainfall in July will be poor, they can save water in dams, says Jatin Singh, managing director of Skymet, a private weather forecasting organisation based in Noida.
“What we have today is more of a policy guideline for the government to plan in advance for a drought or a flood. But the individual farmer living in a city, town or village cannot use it because they need information on how the monsoon is going to behave at an individual level,” says Kolli. And the challenge is to be able to make forecasts on a smaller base and time scale.
Nobody is holding out hope for Goswami, least of all Sikka, his predecessor at IITM. “At least in the near future, it is not expected to yield great results unless the model is considerably improved,” says Sikka. Now is the time for Goswami and his boys to prove their detractors wrong.
Lessons From Africa
What is the experiment? The Regional Climate Outlook Forum (RCOF), pioneered by the World Meteorological Organization in 1997.
Why was it formed? Many countries in Africa lacked the capacity to forecast climatic conditions.
How does it work? Forecasts by individual countries are compared with those from leading international centres to see if they agree. This gives more confidence in the climatic pattern for the upcoming season.
What is the benefit? RCOFs have helped predict river run offs and has helped African countries allocate the available water for various uses. Some now regularly prepare an agriculture and food security outlook based on it.
How is it being taken forward? Regional co-operation has begun in a few other regions like South America, the Pacific Islands, South Eastern Europe and South Asia.