India has several reasons to be wary of, and counter, China’s military build-up 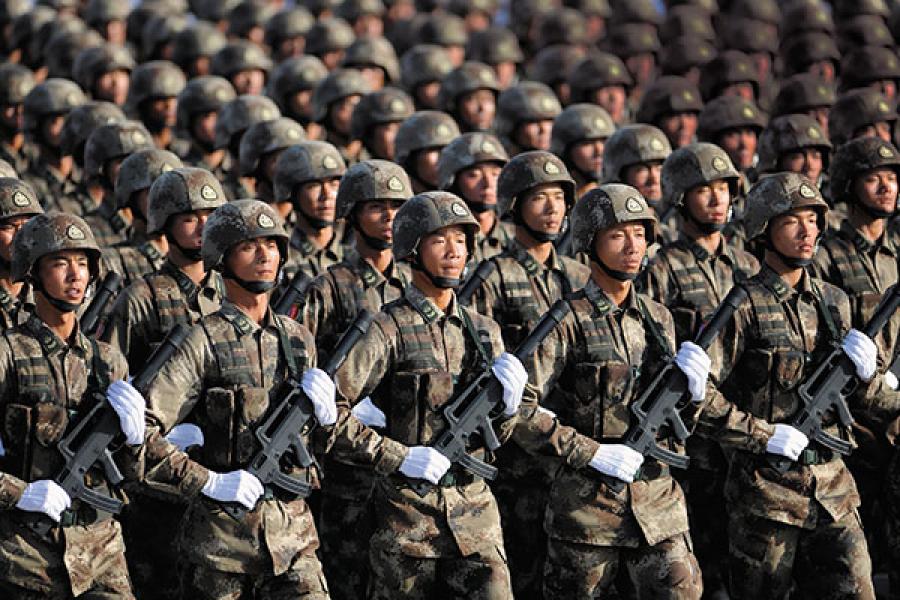 Image: Joe Chan / Reuters
China intends to be a predominant military power in the region and will not hesitate to use its armed forces to protect its development interests

China’s latest white paper on defence, a once-in-two-year exercise, was issued on April 16. It clearly underscores the importance of the People’s Liberation Army and its pivotal role in the economic development and growth of China. Its military rise is of concern for India, given its proximity to Pakistan, from where India has faced continuous threats of terrorism and military misadventures. The strategic relationship with Pakistan is evident from the number of joint exercises and training carried out in 2011-12 and economic investments.

The white paper emphasises China’s peaceful rise and its intent to “never seek hegemony... But we will surely counterattack if attacked”. China now sees itself as a world power that has arrived and it will likely intrude, even if it is not attacked, based on perceived threat or slight. The report says, “China’s security and development are closely connected with the peace and prosperity of the world as a whole.” This seems at times to be at odds with its sense of insecurity and the challenges that the report highlights in order to justify its massive military build-up.

The paper says: “It is a strategic task… to build a strong national defense and powerful armed forces which are commensurate with China’s international standing and meet the need of its security and development interests.” China intends to be a predominant military power in the region, apart from an economic power, which it already is, and will not hesitate to use its armed forces to protect its development interests.

In doing the latter, China is following the footsteps of the United States, which has often used its military ostensibly to promote democracy or to remove dictators; but, more often than not, it has been to protect its strategic economic interests. China will be no different, and won’t have pretensions of protecting democracy.

The report says, “Security risks to China’s overseas interests are on the increase.” China’s engagements in countries like Sudan, Libya, Pakistan and Myanmar, and the Indian Ocean, have increased the risks its overseas assets face, and are driven by economic interests in mineral and natural resources and trade routes. Earlier this year, Pakistan transferred the operational control of the strategically located Gwadar port to China.

It is clear that China’s military spend will continue to rise as it develops its strategic capabilities and firepower, both in terms of conventional warfare and information technology for cyber-espionage and cyber-warfare. Its perceived fears are of US hegemony in Asia, and threats to its territorial integrity, particularly from Taiwan and Japan. India has reasons to be concerned given the contentious border issue.

The white papers of 2010 and 2012, (this author has not read the previous papers) make it clear that China’s political and military leadership are well integrated, although the 2012 paper does not mention the Chinese Communist Party (the 2010 paper established the Party’s supremacy in the command structure).

In contrast, India lacks a strategic direction. Its military might has not been used to further its economic interests, and there is no evidence of such thinking among the political class. In fact, there have been signs of growing tension between the military leadership and the political class, particularly during the tenure of VK Singh as the army chief, and, more recently, the controversial non-defence helicopter deal involving former Air Force chief SP Tyagi.

A Domestic Defence Industry
Asia has become one of the largest defence markets in the world. India has the second largest number of active military personnel after China, a defence budget of nearly $50 billion, and is the world’s largest importer of defence equipment. For any large military equipment manufacturer and exporter, India is an important market and will remain so.

The process of procuring military equipment, however, has been a very long one, and often mired in controversies. Allegations of corruption have often stalled decision making and harmed the strategic interests of India as reputed global vendors have been blacklisted. India has also failed to develop a domestic supply base and Russia has remained its primary source of defence supplies. Although defence procurement is being opened up for the private sector, it is painfully slow. This, while China’s dependence on foreign sources has reduced.

The Economist says, “The defence industrial sector, dominated by the sprawling Defence Research and Development Organisation (DRDO), remains stuck in state control and the country’s protectionist past. According to a recent defence-ministry audit, only 29 percent of the products developed by the DRDO in the past 17 years have entered service with the armed forces. The organisation is a byword for late-arriving and expensive flops.”

A thriving defence sector can drive exports, provide employment, and be responsible for major innovations. India has failed to use its defence needs strategically to develop a domestic ecosystem. The US aerospace and defence industry, says a Deloitte study, employs 3.53 million people; companies in this sector generated $324 billion in revenue in 2010. The industry contributed 2.23 percent to the US GDP, and is one of the largest contributors to the gross exports.

With defence spends in developed countries slowing down, companies there are looking at growth opportunities. With the offset clause in place, India has an opportunity to rapidly develop an R&D and production base. But dilution of the offset clause has meant that MNCs can get away with constructing buildings or sourcing software from India, which was happening anyway, and no indigenous production base or technology capabilities get built.

Cyber Warfare
What should also be a concern for India is the presence of Chinese companies and/or equipment in the country that can affect India’s strategic interests. At a time when strategic warfare can be led by technology, China’s presence in the Indian telecom and information technology sectors has to be viewed with caution. There have been reports from Western countries, and from India, that defence and strategic installations have faced Chinese espionage.

Bloomberg Businessweek, in April, quoted a report by Akamai Technologies, an internet content delivery firm, that said China accounted for 41 percent of the world’s computer attack traffic in the last quarter of 2012, up from 3 percent in the previous quarter; USA was a distant second with 10 percent, India was at number 8, with 2.3 percent. “China’s hacking attacks overwhelmingly targeted intellectual property and state secrets,” the report said.

Mandiant, a cyber security firm, has claimed that hackers from a Chinese military outfit named Unit 61398 was probably behind attacks against more than 140 companies and government agencies around the world. “Our analysis has led us to conclude that APT1 [Advance Persistent Threat] is likely government-sponsored and one of the most persistent of China’s cyber threat actors… Our research found that People’s Liberation Army Unit 61398 is similar to APT1 in its mission, capabilities, and resources. [It] is located in precisely the same area from which APT1 activity appears to originate,” the Mandiant report said. It is therefore not surprising that in March the US banned the purchase of China-made computer technology by the government or its agencies.

There have been reports of cyber attacks on defence and government websites and installations in India, many of them reportedly emanating from China. India cannot turn a blind eye to the operations of Chinese companies in this space as well as the use of Chinese equipment in sensitive areas. Strategic co-operation between India, Japan, Australia and the USA will be of paramount importance.

A Tougher Stand
The recent Chinese incursion into Ladakh seems to be routine before a visit by any senior Chinese political figure (Premier Li Keqiang is expected to visit India in May, en route to Pakistan). In 2006, before Hu Jintao’s visit, China raised its claims on Arunachal Pradesh; in 2010, before Wen Jiabao’s visit, it raised the issue of India’s sovereignty over Jammu & Kashmir. If China can needle India with the border dispute, and engage with Pakistan, why cannot India raise the issue of Tibet’s sovereignty and violation of human rights in Tibet and Xinjiang? Every Indian official’s visit to China should be clubbed or followed by a visit to Taiwan and Japan.

India’s Prime Minister described the Ladakh incursion as a localised problem that can be contained, although he acknowledged it after about a week of the media reporting it. Clearly he is not losing sleep over it. But defence analysts rightly see cause for concern. Brahma Chellaney, a defence expert with the Centre for Policy Research in Delhi, wrote in a column that was published in The Economic Times and elsewhere, “The same old scenario has unfolded again. China quietly occupies a strategic area and a diffident India is left preaching the virtues of diplomacy and peace... India’s leadership fails to distinguish between caution and pusillanimity... India today risks becoming the proverbial frog in the slowly warming pot...”

India’s growing economic and military might, and co-operation with other nations, is sure to raise the temperature on the Chinese side. India has a tough balancing act ahead. Our leaders would do well to remember the lines of poet Ramdhari Singh ‘Dinkar’: “Kshama shobhti us bhujang ko, jiske paas garal ho; uska kya jo dantheen, vishrahit vineet saral ho (Forgiveness is becoming of the serpent that’s got venom; none cares for the toothless, poisonless, kind, gentle one.)”

Anirudha Dutta is former head of research at CLSA India and blogs at forbesindia.com