Collecting fine spirits means not only do you get to drink the best, but also, perhaps, make money on it 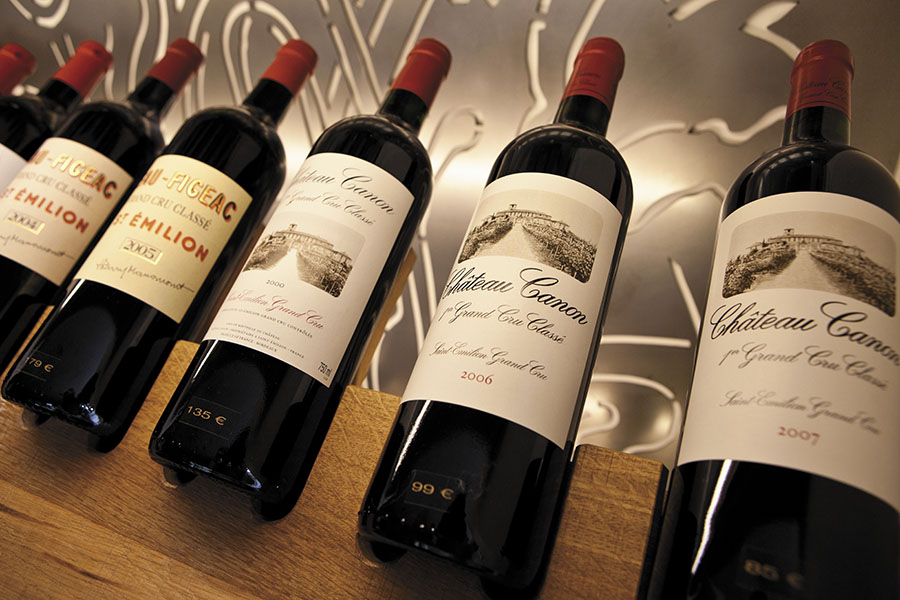 “Even for those who collect for the financial aspect, it starts with a love affair,” says Emma Hammonds, regional director-Asia of Constellation Brands, a New York-based beer, wine and spirits company that has 40 wineries and other facilities. “When you find a wine that you love and you buy more than two bottles, you can become an accidental collector.”

She adds, “You buy enough to be able to put some away. And as wine is, you can always find another beautiful wine bottle, and buy some and put some away. I don’t think anybody becomes a collector intentionally. You just wake up one day and find yourself surrounded by bottles of wine.”

David Elswood, international head of the wine department at auction house Christie’s, agrees: “Collectors tend to amass the wines that fascinate them most, the wines they most like to drink.”

This, however, may not be the case for every collector. As Robert Joseph, former (consumer) wine writer and co-founder of winemaker Hugh, Kevin & Robert, says, the first question you should be asking yourself is: Are you collecting to make a profit, or are you collecting out of passion? Or are you doing both? “Personally, I think a combination of both is a good solution,” he adds. 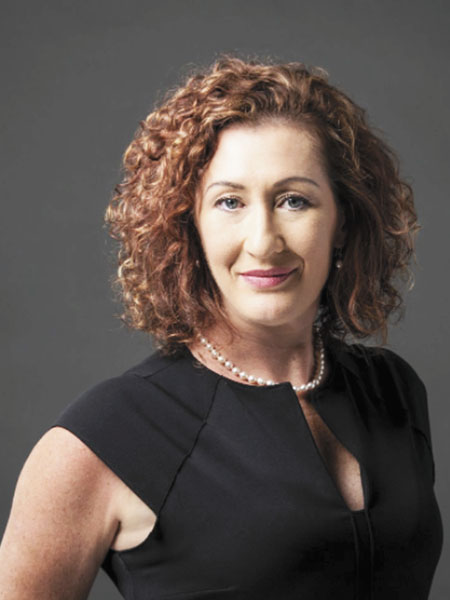 Emma Hammonds of Constellation Brands believes collecting fine spirits starts with a love affair with one
He says that if you are collecting only as an investment, then you don’t really need to know or care about what you’re buying; you just have to buy the right wine, which means buying the ones that are going up in value. Drawing a parallel with high-end cars, he says, “For a car, you might say, ‘Well, all Rolls-Royce cars are going up in value. And although I prefer BMWs or Ferraris, I’ll invest in a Rolls-Royce. On the other hand, you might be somebody who loves Ferraris, and the value of Ferraris goes up. And so, every now and then, you can sell one of the Ferraris.”

One rule of thumb that industry experts tend to follow while beginning a collection is to buy more of what you like drinking yourself. That way, not only do you have some for yourself, but also have some to sell. “For a good quality wine, no one just wants one bottle. You buy six bottles or a dozen,” says Hammonds. “For me, if I buy a case, I’ll drink one bottle now, and let the others rest for a little while. Six months later, I’ll try another; a year later, the next. And the other three bottles, I leave.”

Elswood says selling part of your collection is sometimes necessary as part of further development of your tastes, and the collection. “The old habit was to buy twice what you needed, and keep half back for future trading,” he says.

Joseph recommends buying three cases of something that is going up in value. “You keep three cases, and when the value has gone up enough, you sell two and the profit you make means you maybe didn’t have to pay for the third case; you might even have made money on that. That’s the model that I personally follow and recommend,” he says. 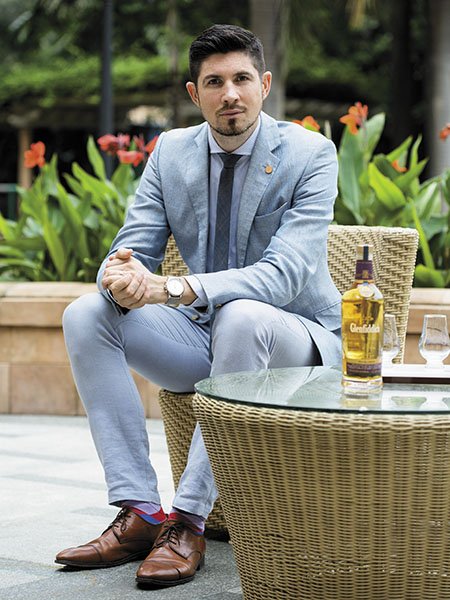 Struan Grant Ralph, global brand ambassador, Glenfiddich Scotch whisky
The nature of a collection also evolves over time, along with the tastes and preferences of the collector. Elswood suggests it is best to start at a modest level, with wines that are just above your everyday choices; and then, as time passes and your palate improves, step up to better wines. “So if you enjoy a good basic Chardonnay from Chile, you could then try modest Pouilly-Fuissé or Meursault as a next step, and then progress to maybe top Napa Chardonnays or Premier and Grand Cru white Burgundies,” he says.

Struan Grant Ralph, global brand ambassador of the Scotch whisky Glenfiddich, says, “My advice would be to collect whisky that you really enjoy. Go through tasting some differing styles, for example, Islay, Speyside and Highland. You should be able to establish what type of whisky suits your palate and which you may want to pursue with your own collection.”

So, he adds, if someone enjoys a fruity, rich, floral whisky with a nice influence from oak casks, with little or no smoky/peaty notes, then the Speyside region of Scotland would be a great place to start your collection. There are over 55 distilleries in that small geographical area, and although not all of them will share the exact same traits, you will be able to build a collection.

However, Joseph cautions against buying only what you like, since that may not be good enough a gauge to decide what to buy. “You really need to know what other people [those in other countries who might have an effect on the demand for certain wines] want, what other people like,” he says.

In the recent past, ‘other people’ have come to mean the Chinese who influenced a roller-coaster ride in the Bordeaux wine market by buying a lot and then stopping suddenly. With the country’s economy growing rapidly, the Chinese have begun to imbibe Western tastes that are considered aspirational.

“Gifting is important in China. And the quality of the gift you give someone indicates what you think of that person,” says Joseph. 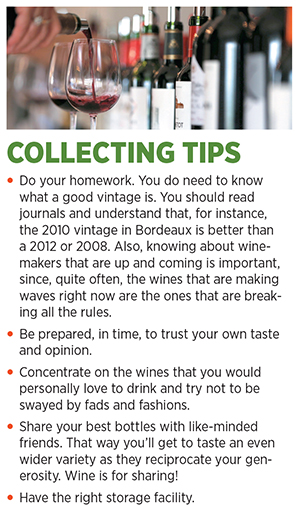 The rise in demand—especially of Bordeaux—meant that prices went through the roof. But it all came crashing down in 2011, when two developments took place: First, the Chinese government came down heavily against corruption, scuttling demand, and gifting expensive wine, in some cases, amounted to bribery; and second, there was a bad crop. “The Liv-ex Fine Wine 100 index in 2011 was rather inflated, particularly off the back of the Bordeaux vintage,” says Hammonds. “The adjustment took place in 2011. The crackdown on corruption in China brought everything back in line. Now, genuine collectors are again purchasing those cases to put away; and others for their own consumption.”

Joseph adds that most of the wine that was being bought earlier was Bordeaux, among which the 2009 vintage was very good. “The prices were very high. The 2010 crop was alright… And then in 2011, a bad crop coincided with the Chinese crackdown.”

With so many, often distant, factors at play, how do you then figure what is good to buy? There are lots of reliable sources, it seems—magazines and journals where critics and reviewers tell you what’s getting better with age; the internet, with its innumerable resources that allow extensive research on price, history and availability; or (if money is not an issue) consultants who would be happy to build your collection for you and take a percentage of the total price as fees. “There is an unlimited array of facts and figures to be found online; so best to do some serious homework before you get your wallet out,” says Elswood.

Ralph says, for collecting whisky, it is vital to have a good understanding of the whisky industry, its history, and its distilleries. He suggests reading up authors such as Charles MacLean, Tristan Stephenson, Dave Broom and the late Michael Jackson, all of whom have written in depth on Scotch. “These authors will give you a solid understanding of each distillery, and what might make each one collectable. For the latest trends and developments within the whisky industry, The Whisky Exchange is a good resource both in terms of its blog content and its online retail store.”

Apart from knowing what to buy, there is also the spectre of fakes that, every now and then, haunt collectors. Buying from a reputable and reliable source is the sure-shot way, say experts, of guarding against such possibilities. “I live in Hong Kong, which is close to China, where there are a lot of fake products,” says Hammonds. “So I go to a reputable merchant.” The advantage of buying from a reliable merchant is that they will replace your bottle—if you have any doubts about it—without asking any questions. Joseph says he would be cautious about a bottle that has been through two or three hands. “Say, if it has been to India and then come back [to the US], then there are a couple of issues: One, I don’t know if it’s real. Two, I don’t know the way it has been treated,” he says. 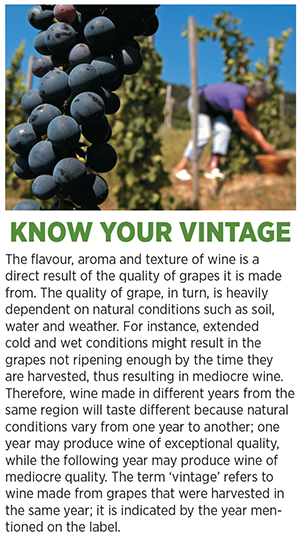 Elswood and Ralph both caution against deals that sound ‘too good to be true’, because they probably are. “The wine world is full of scams and investment schemes that are often misleading or fraudulent,” says Elswood, who suggests that apart from reputable traders, auctions, too, can be a reliable source of fine spirits. For instance, he says, “Christie’s holds two special sales every year in June and December that focus on old whiskies, rare cognacs and armagnacs, as well as rum and other spirits.” Ralph, who seconds the idea of reputable auctioneers as a good source, adds, “It is also important to build a network of local importers, distributors and high-end retailers who should have the connections.”

Like for many delicate objects—such as artworks—storage is a significant aspect of collecting fine spirits. “If you store at home, you should have an area—and this need not be an underground cellar—where you can exert some control over temperature and humidity,” says Elswood. “You cannot store wine in a normal household refrigerator,” says Hammonds. “You need a wine storage unit to ensure the right humidity levels, temperature, a dark environment and no vibrations. These are all very important.” Ideally, the temperature should be about 10 degrees celsius, without it being excessively dry (bad for corks) or excessively damp (bad for labels).

If it is not possible to provide such conditions at home—or if your collection has outgrown your domestic cellar—there are professional storage facilities that will store wine on your behalf until you decide it’s time to drink it. If you have bought wine in, say, London, you can even lease a cellar there to store your wine for you, instead of bringing it back to India.

The great thing about collecting something you cherish is the ability to enjoy it while it is in your possession. Whether it is a vintage automobile, or a painting on your wall, or a bottle of wine in your cellar, you can experience it in your own preferred way. And, selling it (if you have the heart to part with it, that is), might even help you make good money.