Currently a high-tech toy for developers and the lucky few, do these connected specs have a consumer future? 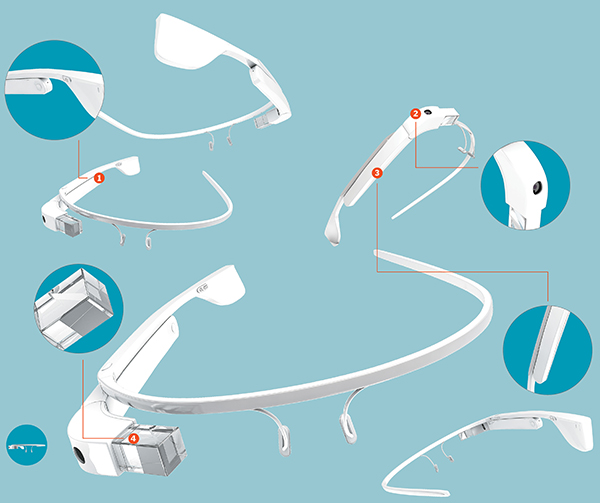 The buzz around Glass, Google’s ‘smart’ eyewear, has been as unmissable as, well, Google Glass on someone’s face. From privacy concerns that have seen it barred from bars and casinos to a pre-launch campaign that saw it handed to such luminaries as Clerks director Kevin Smith, Lieutenant Worf from Star Trek: TNG and Soulja Boy, of Crank That fame, it’s grasped the attention of the world like few other gadgets. But what’s it like to wear every day? And is it really the future of tech, and of social interaction?

First up, yes, you will look decidedly odd wearing Google Glass, at least early on, when you’re the only man in Gurgaon with it. If you’re okay with that, good for you: The tech and ethos of Glass really are fascinating.

The hardware is light at 42 g, and feels more comfortable than most prescription specs. It looks fragile but is actually surprisingly resilient and can survive being dropped and thrown about much more than you’d expect.

Once it’s on, you have to swivel the tiny prism that projects the screen into your eye line, and hey presto, you’re a glasshole, as San Fran early adopters have been so cruelly dubbed.

The heads-up display hovers in the top right-hand corner of your vision, and at first feels strange and intrusive. But, after a few hours that subsides, and you find yourself forgetting you’re wearing it a lot of the time. The design means that when the screen is switched off, you can see through it and act like a normal, non-cyborg type.

On the left-hand side of the specs is the touchpad. You use this to scroll menus, organised as flip cards. Some of the cards have folded edges, which means they contain more information. For instance, clicking on an email lets you view past conversations. It works reasonably well, but if you subscribe to several apps and are getting email, news headlines and social updates, things can become a little laboured, scrolling through dozens of cards. The apps are limited. The idea is that the developers who have been handed the specs will rectify this by the time Glass—or its successor—goes public.

You can send and receive texts, emails and calls, and see updates from social networking app Path, while taking pictures and videos, then uploading them to other social networks. There are also basic apps from CNN, The New York Times and some others giving very simple text and picture info. Audio is conveyed via a bone-conducting speaker and there’s a mic in the arms. The former sometimes gives an odd buzzing sensation, but generally works well.

Google’s own apps are the most polished, as you’d expect, with Maps and Google Now both very impressive. Unsurprisingly, you need an Android phone to get the most out of Glass, and setup is easy; download the MyGlass app, join it to your Wi-Fi network and choose the apps you want. 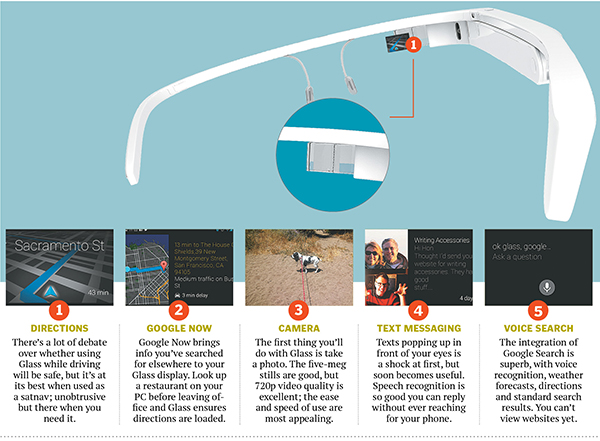 Leaving the house for the first time is the biggest leap of faith; wearing Glass is embarrassing, even in Silicon Valley. That feeling doesn’t subside, even after a few days. What does improve is the tech’s usefulness, as its benefits become more apparent.

Walking directions are incredibly well implemented. Taking five-meg photos and 720p video is ridiculously simple, too: Just tap the touchpad or quickly lift your head to wake Glass, then say, “Take a picture”. No rummaging for your camera.

It’s the alerts that’ll really improve your day, though. Getting an email or a tweet popping up in your eye line is something you very swiftly warm to, and being able to reply by voice command means you’re never out of touch. It’s a whole new way to communicate, and it’s addictive.

That’s a good thing, because if you leave home wearing Glass, taking it off halfway through the day isn’t terribly practical—you can’t fold it up and there’s no easy means of storing it, apart from a bulky carrying bag.

Battery life is relatively good. You get almost a full day’s use if you don’t capture too many videos or take part in too many Google+ Hangouts. Juicing it up is quick via USB, and a full charge takes an hour.

Glass is the trailblazer in the wearable tech market. Yes, there are a few adventure sports goggles that offer augmented reality displays, but there’s really no direct rival to Google.

It’s very much in the early stages of development and the consumer hardware and software that goes on sale next year will surely be very different to this ‘Explorer Edition’. Google is yet to release a price for the consumer model—developers and prize winners paid $1,500 for trying out these early models—but analysts estimate between £500 and £700.

At $1,500, with the current lack of features and compatible apps, we don’t see Glass being worth it for the average consumer, and that’s before you even get on to concerns about privacy—people do seem to be uncomfortable when they realise you’re wearing Glass. However, more apps will come in time and Google or its rivals will make the technology less obtrusive. Contact lenses are an obvious ultimate solution.

For the time being, Glass is an expensive toy for early adopters but we predict, in a few years time, there’ll be glassholes everywhere.

Courtesy T3 (This material is reproduced from T3 magazine and is the copyright of or licensed to Future Publishing Limited, a Future plc group company, UK2010. Used under licence. All rights reserved.)