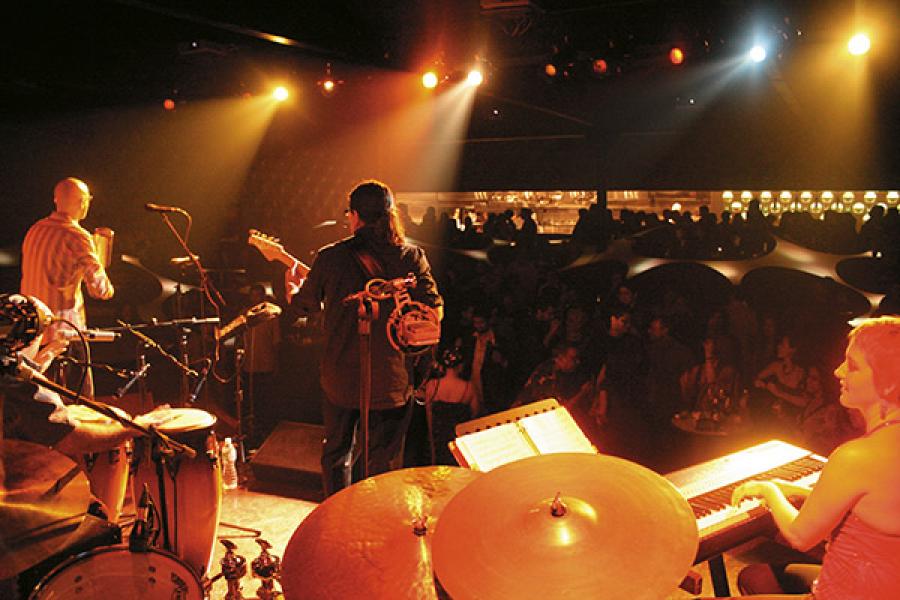 Once upon a Raj, Bombay had buzzing nightclubs. Musicians from the West toured frequently, playing in the five-star hotels, jamming with local musicians whose day jobs were in the Hindi film industry.

Post-1947, much of that faded away. By the ’70s and ’80s, you had a handful of discotheques, where the focus was on dancing, and the music pre-recorded. In a post-liberalisation India that had begun to take pride in its own creations, Hindi film music was joined by indigenous Indipop, but gradually even the Channel Vs and the MTV Indias became 24/7 Chayageets, and the pubs where the young people unwound largely had recorded music too. If you were a musician playing traditional Indian music and were good, you had concerts. But if you favoured Western music, all you could do was play stings for jingle-makers by day and covers in hotel house bands or Christian weddings at night.

Though the internet era saw indie musicians perking up again, it’s only in the last five or six years that Mumbai has seen the resurrection of the kind of evening where you could go get dinner and/or a drink with live entertainment in reasonably salubrious surroundings.

blueFROG sits in the middle of the half-gentrified remains of the Mathuradas Mills compound, part of Mumbai’s now-tony Lower Parel. From the outside, like most of the older buildings in the complex, it retains some of the shabbiness of its working class past. Step in, however, and you could be in a swank club anywhere in the world. A long bar occupies the length of the wall to your right, and the signature round tables and circular seating pods slope down to your left, to a small stage. Expensive without being exorbitant, it buzzes with activity from the evening until Mumbai’s police-enforced witching hour. Outside, there are comfortable sofas and stand-up tables for the smokers, and next door, a small art gallery flanked by a recording studio and, on the mezzanine floor, the corporate office. At 7 pm, it has the energy other workplaces do on caffeinated mornings. We’re here to meet blueFROG’s MD and co-founder, Simran Mulchandani.

Mulchandani (who once traded forex for JP Morgan in the USA), with the musicians Ashutosh Phatak and Dhruv Ghanekar, and the film-makers Srila Chatterjee and Mahesh Mathai, opened blueFROG in December 2007, and now they’re gearing up for a month-long celebration of their fifth anniversary.

blueFROG turns five on December 12, 2012. The restaurant or—as Mulchandani prefers to call it—music venue that also serves food and beverages, has a following that extends beyond its home city. And, critical for a place like this, its most fervent ambassadors are musicians. Which is exactly what the partners want. As Mulchandani says, “Musicians come first. Of course we want our customers to be happy, but without the musicians we’re nowhere.”

When he talks about blueFROG, it is almost like he is talking about a revolution. “Five years ago,” he says, “this city did not have an exclusive venue for live music. We changed that. Today the Indian music scene has changed, with many independent bands and live performances, and we believe at least some credit belongs to us.”

It started with Mulchandani helping childhood pal Phatak with a business plan for another venture. Along the way, the glimmerings of an idea for the kind of nightspot that they themselves would like to go to began to take shape.

They sorely felt the lack of a music venue. Cosmopolitan Mumbai, they reasoned, must have many more like them. Sure, a niche crowd, but they didn’t need millions of potential patrons; five or ten thousand would do.

Finally, on a road-trip to Pune, Phatak driving, Mulchandani taking notes on his laptop, they put together a structure. Now they had the plan, the right partners, like-minded souls who shared the vision; the name took longer. Soundgarden? No. Parel Jam? It certainly fitted the state of the traffic outside, but not quite right.

Then, the day before they were to register the company, “Mahesh and I were stuck on the Chinchkpokli bridge, and he remembered that Ashu had lots of these toy frogs at home.” Why not ‘frog’? They circled around it and finally found something that had a ring to it, blueFROG, where the blue stands for the Blues “and many more things”, Mulchandani says.

Starting with a ‘wall-breaking party,’ they went ahead and remade the place, designing it so music was, literally, centre-stage. The plan was simple. Music tastes form around what you’re exposed to; so expose people to more music. There were many talented musicians in the city, and it was important to build an economy around music. So they included a recording label, an artist representation company, their own recording studio. And, they decided, just word-of-mouth publicity, not just from customers but also from the musicians who performed there.

Mulchandani, a fan of Tim Hardford, the author of Adapt, was clear that he wanted to build things step by steady step. The partners decided that the success of blueFROG would be measured by the response of other venues in the city. If others began to bring in live acts in some form, the concept would be vindicated. (And it has. Live music is now commonplace in the city, and has been joined by stand-up comedy and karaoke, among other options for a night on the town.)

They treat their musicians with respect. For instance, John McLaughlin’s management asked for no food service during his performance, they complied without complaint. As a general rule, when a band is playing, they serve no drinks that require noisy cocktail shakers or blenders, just beer and wine; no loud frying either. Live music rules, and they are ready to take a hit on the alcohol and food to keep that sacrosanct. The gate price makes up for that (they charge for entry after 9 pm), and of course the F&B isn’t cheap.

Even there, blueFROG keeps its rates down before 9 pm, to the level of the many cheaper pubs in the area, to attract the young and the impecunious. Youngsters race to get in at 8.45, and Mulchandani sees that as an affirmation. Those young people will evangelise the place, and, besides, they’ll have more disposable income in the future. blueFROG also serves ‘quarters’, like the nip bars frequented by the less well-heeled, and has cheaper food during happy hours. And it’s not that these patrons sacrifice the music; they get to watch and listen to the ‘Early Set’, new talent that the club gives a platform to.

Some parts of the original plan haven’t worked out. Advances in technology have meant that artistes could create pro-quality music in home studios using relatively cheap equipment and release them online. So the studio is now busy providing music for private label radio station for 15-odd retailers, including Shoppers Stop, Nike, KFC, Globus and Lakme, covering over a thousand stores and bringing in around 5 percent of their revenue. That slice will grow as their clients do, because they bill on a per-store basis, but the club itself is still very much the core.

Or rather, clubs: Since December 2011, they have a large venue in Delhi, and will  expand to other cities too. More venues will help spread the cost of importing international acts. Where to? Bangalore isn’t top of their list; it already has many venues for live music. They’re looking for more under-served markets where they can fashion similar revolutions. Each place will need to adapt, creating its unique mix of music. That’s a lesson learned from Delhi, where they initially failed to take off, until they included a lot of Sufi-based music to the line-up.

The brand is expanding in other ways too. Their blueFROG Diaries,  a 25-minute show focussing on individual bands, will launch on VH1 next year. With Frog Shorts, short films about bands that perform at the club, they will retain IP rights, but the upcoming bands get exposure and ready-made electronic press kits. They partner with Google to have their content on their YouTube channel (‘blueTube’) and will look at other ways to spread the music. The business model revolves around music and always will.

blueFROG is now a home-grown Indian brand with the potential to expand into international markets. And again they’ll look for under-served markets. Mulchandani says it won’t be just the more obvious Singapore or Dubai. “Why not Cape Town? Or Istanbul? We can discover some very fresh talent in these markets which can then come to India and play at all the blueFROG venues in the country.” And that will mean more options for Indian musicians too.

The frog is ready for other ponds, no matter what the size. And they have the playlist for their journey ready.

By the time you read this, blueFROG’s ‘High 5’ celebrations would have begun. But the big event is on 12.12.12, with free entry, all-night happy hours, and a tribute created by their biggest fans, the musicians: 40 musicians in around 10 bands performing 16 songs created to wish the frog a happy birthday. High 5 continues all month, with more special acts.