Why Eric Hobsbawm Was an Unapologetic Stalinist

According to his left-wing admirers, he was brilliant; in the opinion of the rest, he was unreadable 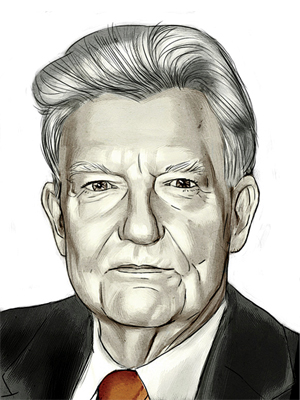 Paul Johnson is an eminent British historian and writer

The recent death, at age 95, of Eric Hobsbawm removed the last of the Stalinists. During his long life, Hobsbawm remained true to his faith, not resigning from the Communist Party until 1991, by which time Stalin’s Soviet Union had ceased to exist.

Hobsbawm’s devotion prompts the question: What leads intellectuals, otherwise sceptical of most phenomena, to adore such monsters? Hobsbawm was by trade a historian. According to his left-wing admirers, he was “brilliant”; in the opinion of the rest, he was “unreadable”. He was also spectacularly ugly. The theory among cynics is that Hobsbawm was so angry with God for making him hideous that he was determined to back whoever was God’s most resolute opponent. In Hobsbawm’s youth, that was Stalin.

A more serious suggestion is that intellectuals love power and the satanic ﬁgures who embody and exercise it. It’s amazing how many intellectuals supported Hitler long after he’d begun to display his evil nature. They included a range of uncommitted ﬁgures, such as WB Yeats, TS Eliot, Jean Cocteau, Benedetto Croce, James Burnham, and Giovanni Gentile, along with such celebrities as Lloyd George, the Duke of Windsor and Lord Rothermere.

Stalin’s admirers were no less numerous. Of Stalin’s murders—he is now thought to be responsible for the deaths of 20 million people—George Bernard Shaw wrote: “We cannot afford to give ourselves moral airs when our most enterprising neighbour ... humanely and judiciously liquidates a handful of exploiters and speculators to make the world safe for honest men.” The American ambassador in Stalin’s heyday reported: “His brown eye is exceedingly wise and gentle. A child would like to sit on his lap and a dog would sidle up to him.”

Stalin worshippers were well re- warded for their idolatry, especially in academia. Hobsbawm was elected to the British Academy; made an honorary fellow of King’s College at Cambridge, a professor-at-large by Cornell University and a member of the American Academy of Arts & Sciences; was also given an honorary doctorate by Columbia and a dozen other universities. Shortly after he again had refused to disavow his approval of Stalin’s empire, Britain’s Labour government made him a Companion of Honour.

Elsewhere, Mao Zedong was responsible for the deaths of an estimated 70 million people, yet Westerners were among his warmest admirers. One of them wrote: “[China is] a kind of benign monarchy ruled by an emperor-priest who had won the complete devotion of his subjects.” David Rockefeller praised the “nation- al harmony” of Mao’s China, which produced not only “more efficient administration” but fostered “high morale and community of purpose”. Another American visitor said “law and order ... are maintained more by the prevailing high moral code than by any threat of police action”.

Similar praise was heaped on minor killers and dictators, such as Fidel Castro. Saul Landau found him “steeped in democracy”; to Leo Hu- berman and Paul Sweezy, Castro was “a passionate humanitarian”. Others said he was “vigorous, handsome, informal, undogmatic, open, humane, superbly accessible and warm”.

Moral Blind Spot
Intellectuals, whom I deﬁne as those who think ideas are more important than people, are notoriously bad at seeing the ordinary world and coming to moral decisions about it. I knew the two greatest intellectuals of their age, Bertrand Russell and Jean-Paul Sartre, and they were the last people one could appeal to for advice on anything practical. I suppose Eric Hobsbawm ﬁts into this category. He was a man so blinded by his own intellect that he was unable to see the evil and wickedness staring him in the face.

Paul Johnson is an eminent British historian and writer