How One Man Secured Mangalore's Beaches

Unsafe waters made tourists ignore its beaches, till Yathish Baikampady changed the way they are maintained and manned 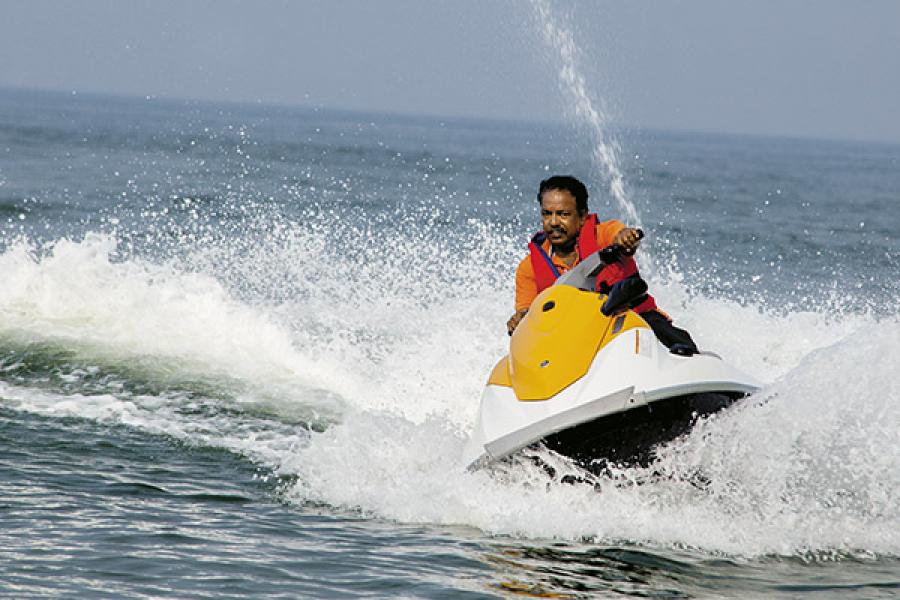 Till about four years ago, Panambur was just another stretch along the Mangalore beach. The two-km stretch was quite similar to what neighbouring Tannirbhavi is today: A deserted place where you could set up your folding chairs in a shaded grove near the beach, have a picnic, and spend a lazy day.

But, today, Panambur is brimming with life. There are three shacks, and six lifeguards on patrol. It is barely 9 am, and at least 200 people have been to the beach in the past two hours. It is not even the tourist season. You could mistake it for Goa.

If Mangalore’s beaches had not been exploited for commercial activities earlier, it was not because no one had thought about it, but because its waters are much rougher than that of Goa or Kerala. While everyone knew what the problem was, no one had thought of a solution, until Yathish Baikampady came along.

The 48-year-old Baikampady had been a manager at State Bank of India for more than 25 years, when he stumbled upon an opportunity to clean up Mangalore’s beaches. What started as a clean-up exercise quickly led to a larger opportunity that led to Panambur shedding its image of being an unsafe beach.

Mangalore may not have been much of a tourist attraction because of its rough waters, but other Indian beaches that draw crowds are not necessarily safe either. In 2011, 28,859 people were recorded to have died due to drowning (not including deaths from capsized boats) in India.

Many of these deaths can be prevented by having more lifeguards, with improved equipment and training, and better patrolling along the beaches. Mumbai has 35 lifeguards for its six beaches. That’s less than two lifeguards per beach per shift. The 7.5 km-stretch covering Juhu, Santa Cruz and Versova has eight lifeguards per shift. Over the past four years, the number of deaths along Mumbai’s beaches has risen from two every year to an average of 23.

It is in this sphere that Baikampady’s company Panambur Beach Tourism Development Project has made a difference. His love affair with the sea comes from his roots: He belongs to a local fishing community called the Mogaveeras. But, for a large part of his life, his tryst with the sea had remained confined to childhood memories. In the 1980s, he found himself a bank job, and continued with it for 25 years.

The method
A chance visit to the local beach in 2008, and the sight of garbage all around, had made Baikampady feel like doing something about it. He approached Subodh Yadav, then deputy municipal commissioner, and began to clean up the beach with the help of volunteers.

In 2008, Mangalore’s municipal corporation was floating a tender to privatise the beach. This meant the beach would be run by a private organisation that would be responsible for its upkeep. The private player could organise events—such as concerts and game shows—to generate revenues, and run beach shacks. It, however, could not raise parking fees for vehicles and would have to share a portion of the revenue with the municipal corporation.

This was when Baikampady decided to look at the new opportunity as a full-time job, and quit his job at the bank. He bid for, and won, the municipal tender. He proposed that the government does not have to spend any money; he would pay the municipality 15 percent if he made profits. Although he is still using a trial-and-error method—he is yet to make profits—he has won a similar tender (for 10 years) for Someshwar beach.

In May 2011, Baikampady was part of efforts to clean the entire stretch of Mangalore’s coastline, comprising 43 beaches, organised by the Mangalore City Corporation and four other municipalities. The exercise saw 11,000 volunteers, armed with equipment and vehicles provided by the Mangalore Refineries and Petrochemicals Limited, clean up about 93 trucks full of garbage in a single day. A similar effort was planned for this November.

Since he comes from the Mogaveera community, he turned to the local fishing folk to employ them as lifeguards at Panambur. “They are people who know the sea well. They can recognise a rip current and instruct people to stay away from it,” says Baikampady. But this wasn’t enough to convince the Mogaveeras to take up a lifeguard’s job, which was still considered to be equivalent to a watchman’s.

Baikampady then roped in companies to sponsor uniforms and equipment for the lifeguards. The fact that being a lifeguard would mean a steady income was what perhaps helped persuade the fishermen to take on the job; a monthly salary would compensate for loss of earnings from fishing during bad weather and unfavourable conditions. Sharath Fallal (37), who joined Baikampady’s crew, says, “I would earn Rs 3,000 to Rs 15,000 a month from fishing. The amount varies on the catch and the season. But being a lifeguard gives me an additional income of Rs 7,000 a month.”

Baikampady also introduced incentives: Lifeguards who took tourists out on jet skis and for other water sports, would get between 10 and 20 percent of the earnings.

Smart, sponsored uniforms, a steady pay, and recognition that they were not merely watchmen but lifesavers helped boost the image of these lifeguards within their community.

Since Baikampady started work at Panambur in 2008, the death toll came down from 25 to five in the first year. Over the next three years, there were no deaths.

“Since we work with fishermen, they know how to swim. But the Life Saving Skills certifications helped them fine tune their skills. They may be good at swimming, but how soon can they rush to a trouble spot? How can they get the jet ski into water within the specified time limit? These are things the lifeguards were trained in,” says Baikampady.

Panambur has been named as the lifeguard training centre for India by the RLSS. Yusuf Chudesra, vice president, west zone, RLSS, says,
“The Panambur lifeguards have trained at least 250 lifeguards in a year.” These lifeguards then find employment at swimming pools, clubs and private beaches  across the country.

Baikampady now has his next target in sight: Making a beach management system profitable. But before getting there, he has set up a company that will take up tenders for beach management. For instance, his plans for Someshwar are different from Panambur. “Each beach is different. Water sports will work in Panambur, but Someshwar will have to be pitched as a family picnic spot.”

Earlier this year, the Odisha Tours and Hotel Owners Association got in touch with him to help promote beaches in the state. But despite the recognition he has got, it is his first venture in Panambur that Baikampady remains extremely proud of. He says, “Women find it safe to visit the beach at night. Any place that makes a woman feel safe makes me happy.”

Tweets by @forbes_india
Why Eric Hobsbawm Was an Unapologetic Stalinist
Cases of Fraud Have Come Down Globally: Study