Flowers You Can Chew

A thing of beauty also offers food for the palate 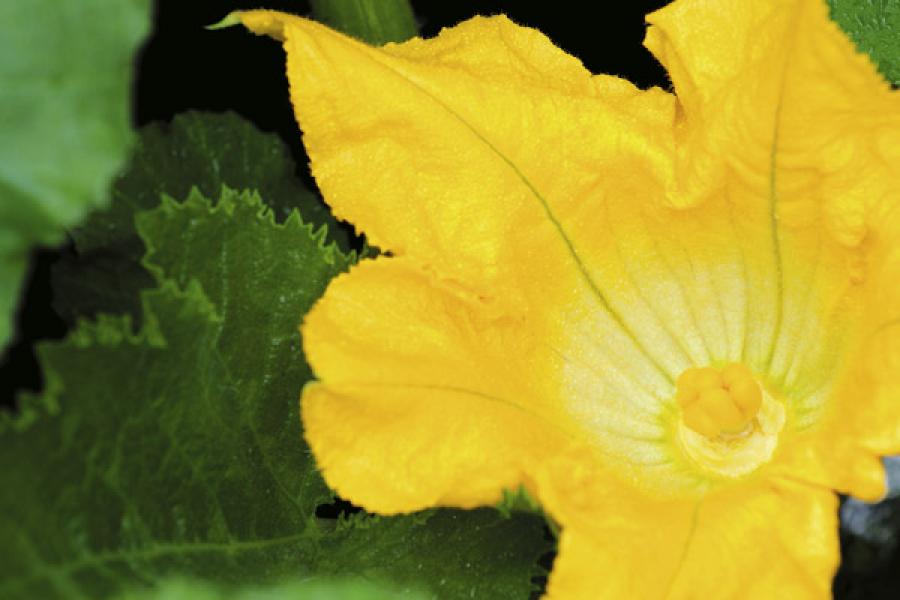 Food cravings were something that happened to other people, like bounced cheques, bad grades, burnt puddings, and mismatched socks. It would never happen to me, or so I was convinced. Such was my confidence in the yearnings of my tongue that when I packed for my first stay in Europe, I made spatial concessions for the husband: Dried leaves, dried lentil dumplings, dried chillies and such things were to be mementos for the tongue in an unfamiliar land, I reasoned. Comfort food, I was certain, ought to come without preservatives, be they chemicals, sunlight or memory.

After the initial enthusiasm for new kinds of vegetables and melons in supermarkets and weekly farmers’ markets had thinned, I began to feel something missing in my diet. But what? The answer came in a morning dream, the Bengali’s version of the daily oracle. “I miss flowers,” I told my mother on a long distance call. She, unable to make sense of the abruptness of my desires, replied sadly, “Bengali men are like that—they can’t show love by gifting flowers.” It was not the husband’s fault but hers, I clarified. Years of eating flowers had made pumpkin flowers more valuable to me than orchids and gladioli. For all the glories of the flower being a muse, Wordsworth had, to my knowledge, never eaten daffodils!

It’s difficult to say it—and there is indeed a moral shock attached to cannibalism in that declaration—but it’s true: I love eating flowers. In many Hindi candyfloss films, I’ve watched with dismay and curiosity how the foolish—or fooled—lover eats petals of yellow calendulas and daisies. Surely flowers were not a fool’s food? But in a metaphoric world where Bengalis asked idiots whether they had eaten grass, making cows of men in adages, was it possible that flowers, with their beauty and fragrance and unmistakable individual tastes, could be food only for the stupid? “No Ma, they don’t eat flowers here,” I reported to my mother from Europe, dismissing all their cuisines in one ruthless chop. (I was wrong, of course. But that’s another story.)

There are no flowers in winter. Spring is for gardeners, not farmers. From where I had come, flowers grow without will or desire. Tied to young bamboo canes with thin coconut fibre ropes which scratch their tender green bodies, young plants stand alert, their tendrils tied to overhead crutches, like the Bengali educationist Vidyasagar’s fabled studying under the lamp-post. No flowers are left unplucked; how fruits are born is a miracle, probably a result of a hidden operation of the underworld of leaves and scheming stems. 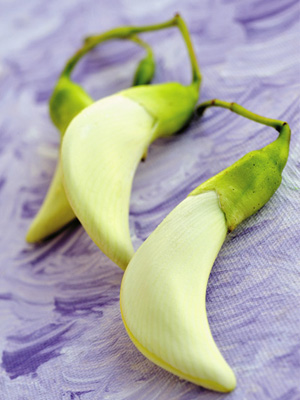 The pumpkin flower is perhaps plucked before dawn, and smuggled to the market beneath an unassuming mass of young pumpkin shoots. The cook scrutinises it and then uses his fingers to whisk together gramflour, poppy seeds and salt. The plaster for the surgery is complete: the pumpkin flower, split open, looks like a frog on the dissection tray. It is dipped in the batter and adroitly transferred into a wok of hot oil where at first it screams, then hisses, and then is too tired to cry the death-song. His cousins follow him into the wok, fighting and crying, until they have become the 40 thieves in Alibaba’s story: Death by Oil.

The bawk-phool, literally crane-flower, Sesbania grandiflora in Latin, is familiar with similar human cruelty. So it grows high up on the tree, an inconsequential resistance. Cleaned and then dipped into a batter of rice flour and nigella seeds, the crane-flower resists till the end, hiding its bitter tongue among its soft folds. That seals its taste for, when it arrives on the tongue, its crunchy epithelium hiding the softness of the petals, it has the intimacy of an éclair, only this is salty. The chalkumro is the white gourd, the ‘gourd on the roof’. It lays flowers, like lizards’ eggs, between secrets. But no one is spared, no mercy is shown, not to the white chalkumro flower, not to the tiny yellow-drumstick flowers fondly called sajne, not to the saluk, the water-lily. Bengalis seek out flowers. The bamboo flower, the sighting of which is said to bring good luck, is trapped in an earthen pot to grow, only to be eaten, like an yeast-cake which grows into a surprise. Given the bamboo’s patterns of flowering, this is a vegetable curry decades in the making.

Banana flowers are stripped patiently at first, but the mocha is like Draupadi’s sari, with its never-ending whorls. Anaesthetised in warm water, its bitterness disappears and it mellows into a squishy pulp when cooked with miniature lentil dumplings and coconut in a dish fit for the vegetarian gods.

Beautiful flowers are never eaten, says my grandmother, as she places a white flower at the photograph of her dead husband every morning—a tawgor, a rajnigandha, a gandharaj. I can only imagine how a pumpkin flower would have looked there, at the base of his photograph. When I offer a white rose, she tells me that Hindu gods don’t like foreign flowers, this while my mother and aunt sprinkle a few drops of rose water into a payesh for the bhog.

Like all children with no use for beauty, my childhood passed flowers by, only occasionally interrupted by my mother’s words in Bangla, “When I am no more, you will see mustard flowers with your eyes.”

Like all children with no use for absences, I never looked for grass-flowers below my toes, but only hunted for the malnourished hibiscuses called lankajaba, the ‘chilly-hibiscus’, which we sucked for an imagined sweetness until black ants swam on our tongues. For, as e e cummings knew, “Since the thing perhaps is to eat flowers and not to be afraid”.

Tweets by @forbesindia
Part 2: Karnataka Chief Minister DV Sadananda Gowda - Political Turmoil Not A Worry
Letter From The Editor: Why We Need To Celebrate Exits