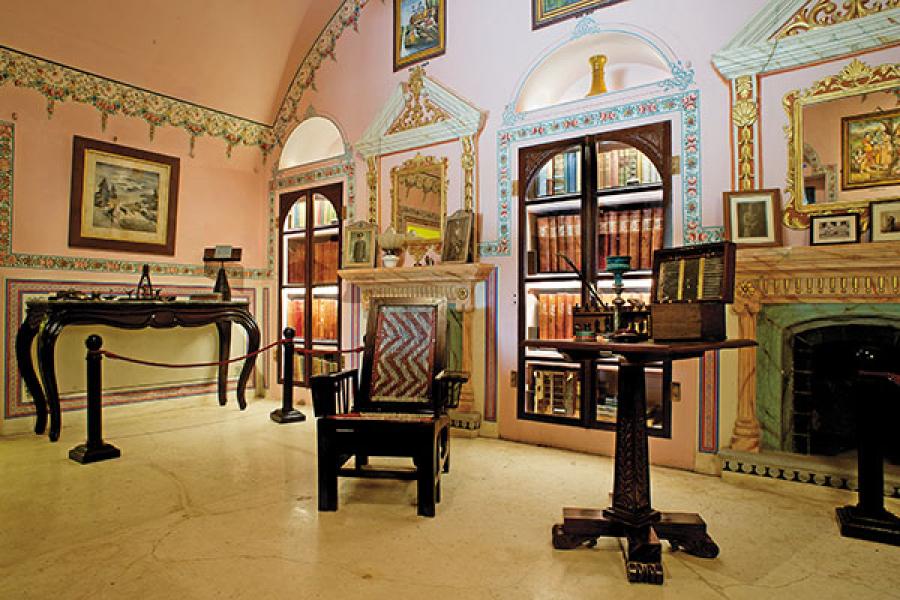 A reading chair reclines at a comfortable angle. Spectacles lie within arm’s reach. Old teak consoles with black marble tops line the room, which is dominated by book-crammed cupboards. Old frescoes of Hindu gods accentuate the sacred emotion of reading and growing with each book. An old hookah and an ebony-and-ivory chess board add to the personal sense of the space. Thakur Amar Singh could have just left his library for a spin around his estate at Kanota.

Though he died more than 70 years ago, there’s no mistaking the stamp of personality Amar Singh (b.1878, r.1924-42) left behind on every object and objet d’art at the General Amar Singh Museum and Library. His collection of old books, manuscripts, diaries, maps, photographs was thrown open amid the sound of bagpipes and the presence of royalty late in January.

By all accounts, Amar Singh was a remarkable man: The grandson of the founder of Kanota thikana, Zorawar Singh (b.1827, r.1862-1908), and a protégé of Idar’s Maharaja Pratap Singh, his military career straddled the British Raj and free India, taking him to service locations in China, France and Afghanistan. Balancing his itinerant lifestyle was a deep love of reading and writing.

The Period Room, which houses the library, dates back to 1898. It began life as a study and grew into a personal library, as Amar Singh’s collection of books began to expand. The family, especially Amar Singh’s younger brother Shivnath Singh, was encouraged to develop an interest in the library; this interest percolated down to his grandson Thakur Man Singh, who helped realise this shrine to learning and life.

The pride of place in the library goes to Amar Singh’s diaries: He started writing them in his Meerut College exercise books and didn’t miss an entry for a single day between 1898 and 1942 except for one, when he was unconscious after a fall from a horse. The 89 volumes of Amar Singh’s writing make up the world’s longest diary. The observations of daily life, social, political, military and family affairs, provide captivating insights into life in the princely states during the British Raj.

While researchers can access the microfilmed diaries, Amar Singh’s Waterman-penned entries are open for the visitor to read. Museum-keepers plan to switch around the diaries and change the display to reveal new dimensions of Amar Singh’s writing. For preservation, it is a good idea, since constant exposure to lights can damage the diaries.

Besides the diaries, there are 5,000 books currently available in the library. The collection provides an idea of the range of his interests: From Thomas Carlyle to Jane Austen, and from A Bad Boy’s Diary to Tales of Three Centuries, they all find a place here. 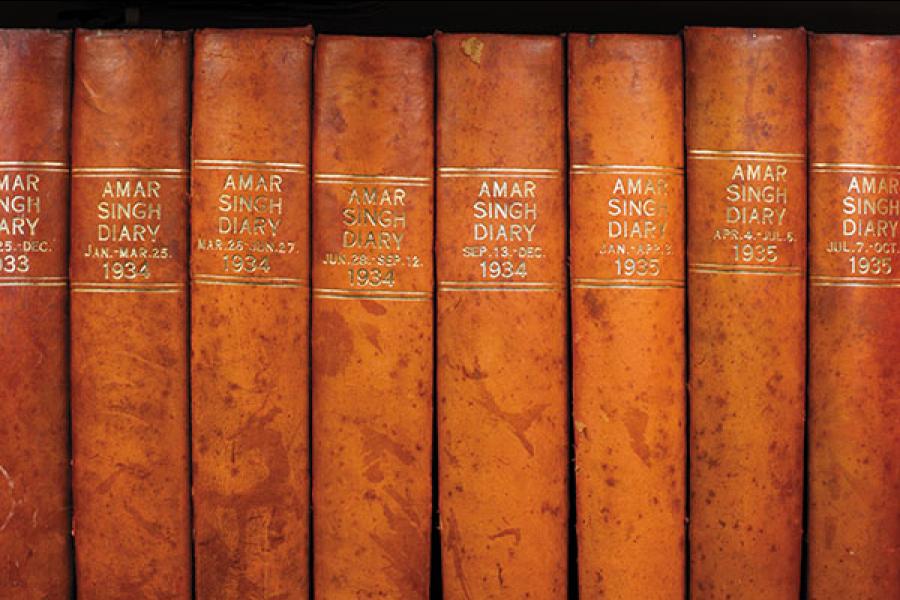 Image: Amit Verma
CHRONICLED IN INK The 89 volumes of Amar Singh’s writings is the world’s longest diary
Curating History
Restored by Eka Archiving, the library is located over the taikhana (the underground apartment where residents took refuge during the hottest months), with the imposing facade of the 19th century Castle Kanota on the left. Astonishingly, Amar Singh never seems to have photographed his beloved library. The only visual reference the archivists found was a photograph taken in 1970 by a Mr Robin von Breton; the room was recreated after this fashion.

While every Rajasthan thikana has its collections of paintings and arms and some might have archives of manuscripts and documents, none has a library, indicating that bookish learning was not a priority for the erstwhile royals. The closest parallel to Amar Singh’s collections would possibly be the large country house libraries in the UK, typically built by generations of a family. Amar Singh’s library, on the other hand, is the work of one man. Besides the historical value, the library is a valuable resource as it includes first editions, out-of-print books and rare titles.

The museum is warm, welcoming, interactive and alive with an energy that, to me, seemed to be exuded by the books, maps, photographs and memorabilia. The laboratory at Mehrangarh Museum, Jodhpur, worked on conserving the photographs, albums and maps, carefully peeling photos off crumbling albums and mounting them afresh in the original sequence, and stabilising maps on acid-free backed mounts. The diaries are being similarly conserved in small batches. Since conservation and restoration are expensive, the Kanota family is looking to split the costs with the National Mission for Manuscripts. The books, luckily, are in a reasonably good condition.

“Getting a sense of the collection, its size and range, is the first challenge,” says Pramod Kumar AG of Eka Archiving, “and working out how to catalogue and classify it is the next. It’s important to keep storage concerns in mind. A collection spends most of its time that way, so it makes sense to document it in groups that will be viable to store. Size forms the basis of the groups or lots we make, but we allow for cross-referencing and thematic documentation. We use a simple but effective system of keywords for this. With a period library like this one, the books are treated as objects in a museum would be—since they won’t be circulated, as in a lending library—so we don’t use the Dewey decimal system, but accession numbers.”

Life and Style
To the left of the Period Room is the War Room, with a recreated version of the uniform worn by Amar Singh as part of Lord Curzon’s Imperial Cadet Corps. Old photographs provide a picture of the period’s military culture. Amar Singh and his circle at Jodhpur were fervent about polo and horseback riding. He stoked his enthusiasm with reading, eventually owning nearly 100 books on sport, hunting and animals, in addition to subscriptions to several magazines on the subject. 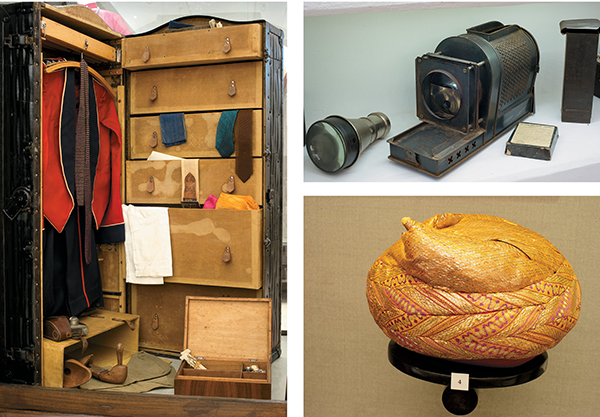 RELICS OF A ROYAL LIFE (Clockwise from left) Some of the thakur’s garments on display at the museum; his camera and IIford Empress glass plates reflect his love of photography; one of Amar Singh’s turbans

The trophies in the Sports Room, located beyond the Period Room, are replicas of only two of the many won for a range of sports, from polo and showjumping to pigsticking. Also on display are polo garments and accessories, including a replica jersey of the eagle-embroidered Jodhpur polo team uniform, in which Amar Singh played—and won—his first serious match. Displayed in a replica period gun cabinet are some of the rifles Amar Singh cherished and used. Also exhibited are a few of the long spears used in pigsticking.

“In the evening, I went for lawn tennis at Col Jacob’s house. [Colonel Samuel Swinton Jacob was Jaipur State’s Chief Engineer] I played one game of it but was quite out of practice and could hardly hit in the right place. I had also two games of badminton in which I played a little better than I expected.” (Jaipore, Thursday, 5th April, 1900)

In the taikhana, which served as Amar Singh’s living quarters, a writing table stands in the left corner. It has been recreated from an old photograph. A Waterman Ideal Fountain Pen with a 22-carat gold nib lies on the table. A glass cupboard next to it houses his collection of ink wells. A photograph of Amar Singh perched on a cliff reading a book while a lackey holds an umbrella over him catches the eye.

One section of his bedroom retells his fascination for photography. Ilford Empress glass negatives, a projector, photographs of his family, childhood, camel races, horse races line the walls. No originals are displayed—mostly small prints, these are preserved in family albums—but the high-quality reproductions have been carefully selected to complement the storyline.

One hundred and fifty maps make up the maps collection. Some of them feature in Colonel Tod’s Annals and Antiquities of Rajasthan, while others are khasra maps of agricultural land divisions. Since Amar Singh and, before him, Narain Singh and Zorawar Singh had judicial powers, the maps document topographical and revenue details. The library has 50 European cookbooks in addition to the family’s collection of 44 volumes of recipe diaries in Hindi. Food and hospitality was yet another of Amar Singh’s passions. His interest in food extended from cooking and savouring it to the origins of recipes, food history and culture. The taikhana displays a collection of tea sets, pickle jars, liqueur glasses, rare whisky bottles, old tiffins and other utensils.

A man’s passion for scholarship of all hues laid the foundation for a treasure trove for scholars and travellers who wish to peek into the past. But the unique library at the Kanota thikana would have been unrealised if it were not for Man Singh. “General Amar Singh was my grandfather,” he says, “and it was my father’s dream to build a museum and library around his unique personality. Amar Singh’s documentation of his socio-historical milieu is a benchmark for the Kanota family and needs to be opened up to the world.”

GETTING THERE
Kanota lies 15 km east of Jaipur on the Agra highway and is best reached by car. Castle Kanota is open to guests. Visit hotelnarainniwas.com for more details. Charges for access to the library are still being worked out.