The Olympians Who Didn't Win Medals

Usually the medalists get the limelight, but Sarnath Banerjee focuses on the other Olympians

In Sao Paulo, I chanced upon a judoka, Douglas Vierra, who had almost won an Olympic gold medal. He demonstrated a few throws to me. He showed me that judo is as much about falling as it is about throwing. This tayed with me.

When the Olympics people, via the Frieze Foundation curator, Sarah McCrory, got in touch with me, asked for a proposal, I said, Yes! A gallery of losers! Mine was one of four projects that were selected.

Most of the time he doesn’t get to play at all. It’s an Olympic campaign, except the subject is losers. Like a Nike campaign gone wrong. 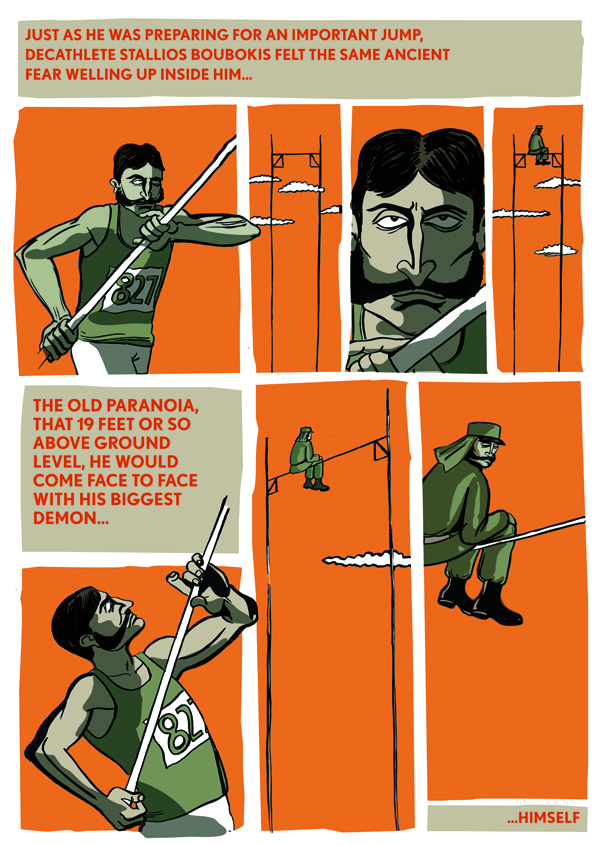 Initially, I thought I would do actual anecdotes, based on real people. In a small town in the former German Democratic Republic, I got to see things from the other side of the Curtain; where people like Teofilo Stevenson and Sergei Bubka were heroes. I did a huge amount of research. But it was going nowhere. Then I thought, do I want to do reportage? Or do I want to take it to a philosophical level? I decided to do the latter, because it would help me come to some sort of realisation about myself. 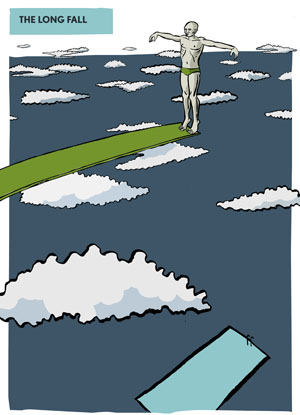 All the art came from conversations at parties, gatherings. That’s the thing about anonymity in a different place: you can be all kinds of funny things. I was a Historian of Strength.

I started feeling like an athlete, embodying an athlete. I was a table-tennis player, a javelin-thrower, a fencer, all kinds of strange sports.

For two weeks I embodied the spirit of a high-jumper; think gravity…embody lightness, read light—Paulo Coelho!—listen to light music—Pankaj Udhas!—and look at the shelf with its one bronze medal, and feel the heaviness settle…all those years, just one bronze…but then brush it off, keep working out, being lighter. I was a table-tennis player, who, in the eerie silence of the auditorium begins to think about how to spell ‘eerie.’ A race walker whose mind is far ahead but her body can’t keep up. A pole-vaulter who thinks he’s in the wrong sport…when he’s halfway up the jump. A boxer who jumps into the ring with great reluctance; he thinks only about dodging punches, not landing them.

In one of the works, there is a collection of gold medallists, all thrusting their medals forward in some kind of phallic display. Mainstream media will print the names of all the winners. Anish Kapoor and Lakshmi Mittal will build another cathedral. Self-congratulatory messages will be posted on Twitter and Facebook… I’m talking about myself, really. It goes against the grain; maybe it’s the way I grew up. Maybe it’s because I have failed in all sporting endeavours, even sub-junior table-tennis. To me it feels like a display of vulgarity. So it’s important to have this other side, humane society, discussion around the Olympics that isn’t fuelled by winning.

Barwa Khiladi, by Sarnath Banerjee, is a set of billboards, posters, electronic displays and graphic shorts. It is part of Frieze Projects East, four public art projects in East London, a part of the London 2012 Festival, the finale of the Cultural Olympiad. Artworks appear courtesy the artist and the Frieze Foundation.