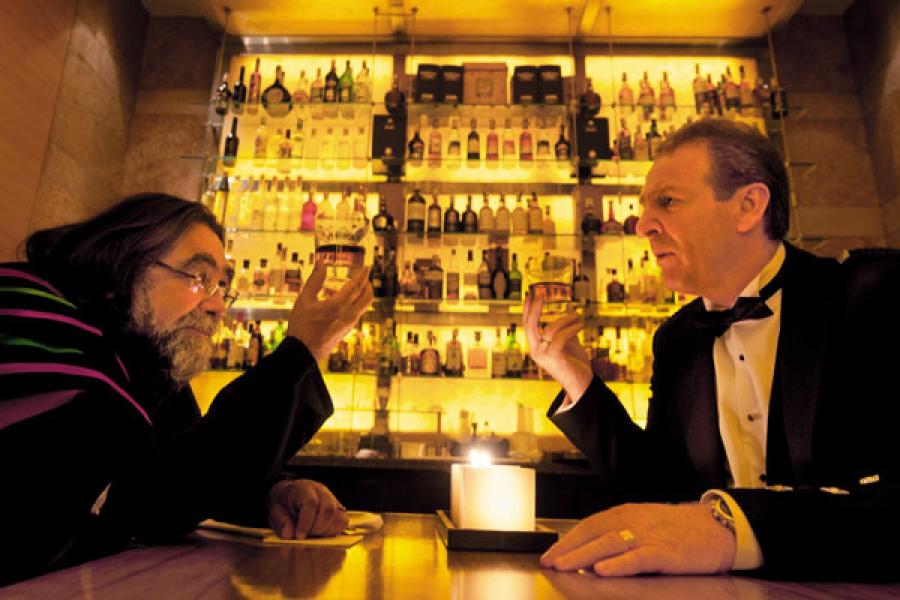 Ian Millar and I are sitting at the bar in the Grand Hyatt in Santacruz, Mumbai, on a Saturday night discussing life. Over a bottle of a 12-year-old Glenfiddich Single Malt Scotch Whisky. Dressed in traditional Scottish gear, Millar doles out good life advice. “Remember the memory, not the bottle,” he says. Millar is the global brand ambassador for William Grant & Sons, the company that owns the Glenfiddich distillery.

Whisky should always be had at room temperature, says Millar. “Temperature is something that every whisky gains from. It brings out the flavour.”

This drink ticks all boxes. It smells like heather and tastes like honey. We haven’t added water or ice to it. I believe if you can’t drink it neat, don’t drink it.

Millar is in India to check out the local food that can be paired up with single malts. He thinks Indian food pairs up well with Glenfiddich malts. Isn’t Indian food too spicy to allow the palate to taste the whisky? “No,” says Millar. “Take the malt we are drinking. It’s light and fruity. It goes great with the Murg Khushk Purdah (ITC Maratha, Mumbai).” That’s boneless chicken grilled in a tandoor and cooked with veggies. The malt was paired with ‘foreign’ dishes such as Pan Seared Goose Liver and Truffled Hollandaise. “The Indian dish came out tops,” says Millar.

At the other end of the spectrum is the 21-year-old. “This is an ideal after-dinner drink that pairs up well with desserts,” says Millar. Cue the fruit salad and the crème brulee. What if you want to drink it with Indian food? “BBQ saffron prawns,” says Millar.

He wants to know more about Indian cuisine. I start off with the flavours of Bukhara at the ITC Maurya, Delhi, and biryani at the Dum Pukt, Mumbai. I give him the perfect recipes for nihari and kane (ladyfish). We ask for a 15-year-old to be opened. The bar is out of stock. Nope. Millar asks for another 12-year-old.

“It may surprise you,” he says. I have my doubts. We take a sip. Millar’s right. Even though this is a 12-year-old, it has a character of its own, very distinct from the first one. Its structural characteristics are similar to the Aberlour. Very smooth. “The oak used in the barrels makes a difference,” explains Millar. A lot of the Glenfiddich barrels are made from Spanish oak. “And we never tell anyone how much oak we use.”

(This story appears in the 25 March, 2011 issue of Forbes India. You can buy our tablet version from Magzter.com. To visit our Archives, click here.)

Tweets by @forbes_india
The Next Microsoft: Here’s a partial list…
Workplace Revenge: When It’s OK to Get Back at a Bad Boss