Workplace Revenge: When It’s OK to Get Back at a Bad Boss

Retaliating against one’s boss is more acceptable to employees if the retaliation is an act of omission or inaction, rather than active efforts to harm an unfair boss

Have you ever been upset with your boss? Perhaps he or she overlooked an accomplishment or didn’t give you a raise that you thought you deserved.  According to a study by labor relations expert David I. Levine, retaliating against one’s boss is more acceptable to employees if the retaliation is an act of omission or inaction, rather than active efforts to harm an unfair boss.

Levine’s study presents respondents with hypothetical scenarios and asks them to judge how acceptable they find an employee’s (hypothetical) response.  For example, in one scenario a boss who has misbehaved needs to find an important file. Respondents found it more acceptable for an employee not to tell his boss where the (already missing) file is located than for the employee to actually hide the file from his boss. "Intuition says that doing something is more of a serious act than letting it happen and not stopping it, “says Levine. 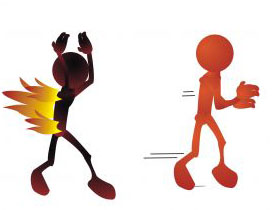 Levine and Charness set out to determine what factors make retaliation acceptable to employees when a manager or boss misbehaves. The research did not examine the ethics of employee retaliation.  While employee sabotage has a bad reputation, Levine notes that in some cases, “Retaliation may expose managerial misbehavior and could improve organizational effectiveness in the long term.”

Researchers surveyed workers riding Bay Area Rapid Transit (BART) traveling to and from San Francisco and the East Bay. The 13-minute tunnel ride under the bay provided the perfect venue because the trains are regularly filled with workers.  The survey involved two scenarios: 1) a manager who has sexually harassed the worker’s friend and needs help in finding a missing file, and 2) a manager who has unfairly passed over the employee for promotion and then asks the employee for help in choosing an effective marketing plan. The boss is unaware that one plan will make another division look good while the second plan will make him, the boss, look good. The question: does one recommend plan number one or two?  The two scenarios were varied slightly and distributed in five different survey forms. Workers were asked to rate the retaliation on a scale of one to seven, from completely acceptable to completely unacceptable, and also to rate the degree of damage, e.g. whether replacing the file takes hours or weeks.

However, when respondents were given the choice to punish the offending manager by merely ignoring his or her request, 25 percent took that choice and the total share with either active or passive punishment rises from 49 percent to 59 percent.  The increase in retaliation due to the option to (passively) not tell was entirely among women.

Levine says the study holds valuable lessons for managers. “Don’t surprise people,” says Levine, “When something is about to go wrong or goes wrong, tell your employees why. Managers face high risks of both active retaliation and passive withdrawal of effort if employees are harmed by what they view as a conscious management choice.   To the extent that employees are harmed, managers should be sure employees see them sharing the pain, not profiting from employees’ losses.”

The next step, says Levine, is to further examine the dimensions of employee misconduct at work.

Tweets by @forbesindia
Whisky & Spice - Do They Gel?
How To Manage Risk in a Global Supply Chain