An Omission Not Bankable

The Indian government is doing away with many unnecessary clauses in its companies law. It may also have dropped a very necessary one

In the 1960s, when the Reserve Bank of India (RBI) erected the statues of Yaksha and Yakshini, the mythical guards of wealth, in front of its offices, it led to a mini uproar among the prudish in society. A lawmaker asked Parliament what was the object of erecting the statue of a naked woman (Yakshini) at the gates of the central bank. The symbolism of RBI’s role as the guardian of the nation’s wealth was lost on such critics. But, bank nationalisation proved that a strong regulator was necessary to keep the financial system from losing its clothes.

Today, the position of the “naked woman” is under threat. The government has decided to replace the Companies Act of 1956 and is pushing a new bill for Parliamentary approval. The New Companies Bill does away with as many as 175 old sections. But, in the process of simplification, it has done away with a key section that gave banking companies a special status, bringing them under the Banking Regulations Act of 1949 and thus under the regulatory purview of RBI. Instead, the new bill treats a bank as any other company.
If this law is passed without inserting a clause similar to section 616 of the old Companies Act, it could end up undermining the regulatory powers of companies, create confusion in the way bank balance sheets are written and throw away some of the prudential norms imposed exclusively on banks. 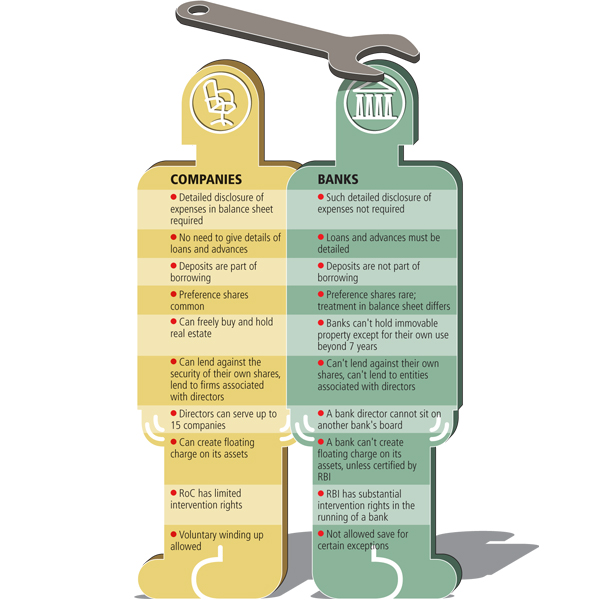 “There are many similarities between a company and a bank,” says M.S. Sundara Rajan, chairman and managing director of Indian Bank. “But there are also many differences. From our balance sheets to our operations, there are things that we can’t do like a company would do.”
Banks need a higher level of protection against failure than companies, because they work with the savings of millions. A bank failure is an extremely serious affair, the reason why RBI normally moves at lightning speed to merge failing banks with healthy ones.
Banks are not allowed to invest in real estate for profit. They cannot hold property for more than seven years except for  own use. They can’t lend against their own shares, lend to firms associated with directors, create floating charge on their assets without regulatory permission or wind up their operations voluntarily. All restrictions not applied to corporate entities.
“If banks are clubbed with the companies... the transparency experienced under the regime of RBI may not be available as the banks then may not be subject to such strict scrutiny and norms,” says Diljeet Titus of law firm Titus & Co. “It would probably lead to multiple regulators governing banks with distinct policies all aimed at the sole objective of profit maximisation rather than social good.”
Banks are registered as companies as far as their obligations to shareholders are concerned. The Companies Act and stock market regulations by the Securities and Exchange Board of India (SEBI)  already have the necessary supervisory powers over banks. But it takes the RBI to govern the banking system thoroughly.
The government must bring back the exemption. If there are any kinks in the banking laws, it can launch a review of those. Further, it can use the advent of the International Financial Reporting Standards (IFRS) to narrow accounting differences between companies and banks. Only then, the purpose of the
New Companies Bill — regulation that is easy to follow and administer — would be realised.