Out Of Touch: The World Bank is A Few Steps Behind

The World Bank has made recommendations in its first review of India's anti-poverty schemes, but seems to have given ground realities a pass 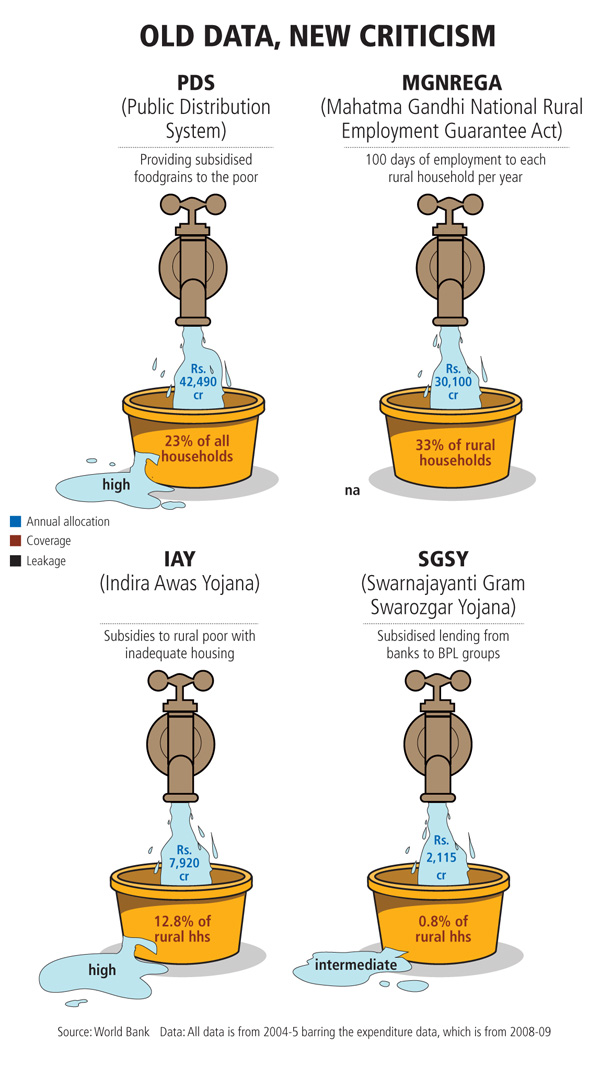 World Bank Proposal: Cash transfers in the Public Distribution System (PDS). The WB has noted that no country has a well-functioning PDS and India is no exception with only 41 percent of the grains released reaching their targets in 2004-05.

Our View: States like Chhattisgarh and Tamil Nadu have shown that the traditional system can work without cash transfers. The main reasons for leakages are poor monitoring and lack of clarity about who the ‘targeted’ population is. Cash transfers will not solve the problems. Also, data from 2008 and 2009 shows that leakages have been coming down as chief ministers realise the political benefits of a well functioning PDS.

Our View: Most experts outside the WB do not agree. Urban areas do not have adequate opportunities for unskilled labour and the minimum wage of Rs. 100 is unappealing. Instead, if the scheme is implemented better in villages it would relieve urban stress by holding off distress migration.

World Bank Observation: It has held up the Rashtriya Swasthya Bima Yojana (RSBY) as a scheme that is well designed and well implemented. The RSBY was started in 2008 and is one of the world’s largest health insurance schemes covering about 70 million.

Our View: While government data is impressive, there is little independent research on RSBY. Most researchers believe that its efficacy is critically dependent on the public health care system. “There is no point having an insurance card if there is no hospital close by,” said one economist.
World Bank Proposal: A ‘3+ Block Grant’ set-up. It means the Centre runs three key schemes like PDS, MGNREGA and RSBY and leaves the states to decide how they want to run the rest, by giving them a block grant.

Our View: Most experts believe that states are closer to the people and have more at stake when it comes to poverty alleviation. However, the suggestion ignores political reality.

Our View: While more programmes that are preventive are crucial in the long-term perspective, yet, given the fact that existing poverty levels in India range between 30 percent to 50 percent of the population, they should not come at the expense of protective programmes.