The Slow Death Of The RTI Act

And you thought you could get information from the State using the RTI Act? Take your place in the line behind thousands of frustrated citizens

The government is considering changes to the Right To Information Act (RTI) that activists feel could dilute the power of the Act. Former Chief Justice of India K.G. Balakrishnan has recommended protecting the judiciary from RTI queries apparently on grounds that the move would “erode” the independence of the judiciary.

RTI naysayers may breathe easy. India’s bureaucracy is already choking the RTI Act to a slow death. According to a forecast by Shailesh Gandhi, one of India’s leading Information Commissioners (IC), the Central Information Commission (CIC) is likely to be saddled with over 90,000 pending complaints by 2015.

Gandhi believes that the Act is losing steam because there are not enough people to handle the number of pending complaints. If Gandhi’s forecast is accurate, a waiting period of at least three years is to be expected before a complaint can be taken up. This is because all the commissioners together can at best solve just about 30,000 cases in a year. Considering that appeals reach the CIC only after an RTI applicant is dissatisfied by the response from lower levels — the departmental information officer and the first appellate authority, who is generally the department head — the overall pendancy is likely to be huge. “Who is going to wait so long for a piece of information?” asks Gandhi.

The Conflict
At present, the picture is worse than Gandhi’s fear of the future. Instead of a total strength of 11 commissioners, the country just has six. ICs resolve cases at different rates. For 2010, the average number of cases resolved per IC was about 2,700. If we remove the resourceful Shailesh Gandhi from the list, this number falls below 2,000 per IC. Gandhi is among the most prolific and resolves close to 5,000 cases a year on his own.

At 2,000 per IC and at full strength of CIC, the maximum cases resolved would fall to roughly 22,000, almost a third of Gandhi’s forecast of 90,000 cases for 2015. So by 2015 an RTI applicant wanting to appeal would have to wait for six years before being addressed by the IC.

The issue of growing pendency is not limited to the CIC. According to the findings of a recent nationwide study conducted by Public Cause Research Foundation (PCRF), of 76,813 cases analysed, there was a delay in providing information in 59,631 cases.

The survey states that, at the current rate of disposal, 20 ICs had a pendency of over one year. Of these Jagdananda of Orissa was the worst; at his current rate of disposing cases (304 a year) he will take 10.7 years to clear everything currently on his table. This is not including the cases that will be filed in the next 10 years. S.K. Sarkar of West Bengal will take 10.2 years and D.N. Padhi, also of Orissa, will take a little over five years. “Ordinarily, we would expect that  the disposal of any case should not take more than three months,” observes the survey.

What is the reason for the growing pendency and why doesn’t the government do something about it? Gandhi and other RTI activists blame the lack of a real commitment on the part of the government.

The Squeeze
Each IC gets seven staff members to help resolve the cases. According to Gandhi, if this number was doubled, one could solve a lot more cases straight away. However, the ICs are not allowed to hire more employees right now.

At present, the government spends roughly Rs.25 to Rs.30 lakh per year on one IC and about Rs. 12 lakhs per year, in total, on the seven staff members. This includes the salary, incentives and any other facilities that they might use.

The reason why Gandhi is ahead of all the ICs in the country is because he employs extra staff, especially young lawyers, to help him process more complaints and he pays for their salaries from his pocket.

However, Arvind Kejriwal, who spearheaded the demand for RTI in the country, has a different opinion.

“It is not the lack of staff but the lack of penalties which should have been imposed on erring officials that is the real reason why complaints are growing,” he says. 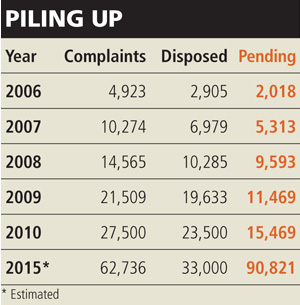 Under RTI Act, a commissioner should impose a penalty for delay in providing information unless the basis of delay was held to be reasonable by the Commissioner. Kejriwal points that the survey by PCRF found that penalties were imposed on just 3.17 percent of the 59,631 cases of delay.

Essentially, it means that in the absence of penalties, an officer can get away with such delays and as such has little incentive to give the information in the first instance. However, Subhash Chandra Agarwal, one of the most prominent RTI activists and a veteran of many RTI applications, endorses Gandhi’s prescription. But Agarwal also points at the government’s apathy when it comes to choosing ICs.

“This is the first time in all these years that we don’t have a full quota of ICs. It is not clear why there is a delay. Ideally, the government should be better prepared for filling up places since they know who is set to retire when,” says Agarwal.

Moreover, there is no clear criteria to ensure that only a deserving individual becomes an IC. Kejriwal has often highlighted that the CIC is being used as a parking spot for those close to the government. “The process of appointment should be made more participative,” says Kejriwal.

Gandhi agrees and adds that there should be some basic criteria that a candidate must satisfy to be a competent IC. Knowledge of law, management skills and a demonstrated commitment to transparency, could be some benchmarks.

Our Take
• Firstly, the government should ensure that the CIC functions at full strength. For this, the government would require planning well in advance to make sure vacancies are filled in time.

• The process of selection of ICs should be more rigorous and participative unlike the adhoc system currently under way. There should be a vigorous campaign to sensitise ICs to the importance of their job to the country’s democratic heritage.

• Following the Shailesh Gandhi model, the government should allow more legal staff with the ICs. This would allow the commissioners to work more efficiently.