Eight years on, WTO's Doha talks are still in a deadlock. The solution? Broaden the negotiating space

The Doha Round of global trade talks, which started in 2001 to liberalise trade, is comatose. The problems relate to the agriculture (AG) sector.

The first problem is the right of developing countries to restrict farm imports from developed countries when such imports surge. Countries like the US want import restrictions to kick in only if that surge is 30 percent. Countries like India say an increase of 5 percent should suffice. 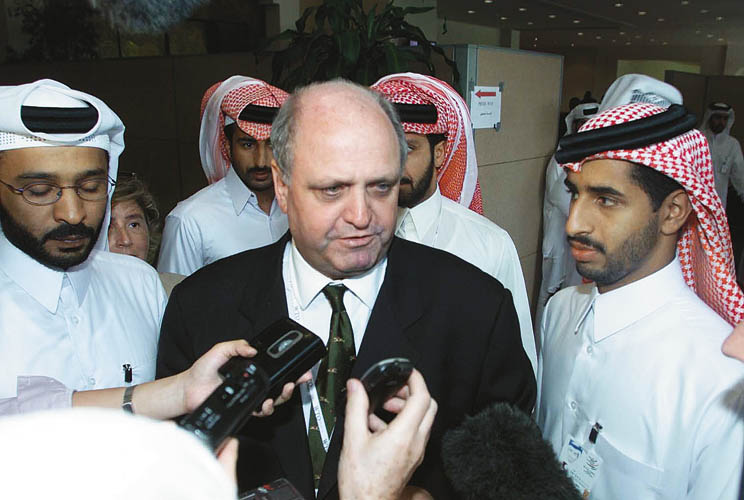 Image: Abed Omar Qusini/ Reuters
TALK IS CHEAP: Mike Moore, the then head of World Trade Organization, talks to reporters in 2001
The other stumbling block relates to farm subsidies in developed countries. Developing countries want the European Union to reduce subsidies by 25 percent and the US and Japan by 66 percent. Developed countries aren’t ready to touch their subsidies.
Finally, the clause that “nothing is agreed unless everything is agreed” ensures that even though primarily AG and non-agriculture market access are being discussed, the Doha round will not be complete unless the members agree on the other three areas, namely Services Trade, Rules (governing trade) and Trade Related Intellectual Property Rights (TRIPS).

What the Experts Say
Experts suggest that the developed and the developing world should meet half way thus:
--- Developing countries provide agri-market access and agree to a 15 percent threshold for farm import restrictions.
---The US and EU cap their farm subsidies near currently applied levels.
---All countries “show their cards” on special and sensitive products — goods they want to exclude from formula tariff cuts — and then pare back the lists.
---The G20 allows free trade in at least three sectors — chemicals, electronic and electrical goods, digital products.

Our Take
Countries have been negotiating on agriculture and industry for eight years, going back and forth with various offers from time to time. All the negotiating space has been exhausted. The way forward would be to broaden the negotiating space. Countries must focus their attention on Services Trade negotiations which have remained on the back burner till now.
Experts are unanimous that member countries stand to gain a lot with the opening up of services trade. India is expected to be a huge beneficiary especially under “mode 4” which allows for the temporary movement of people across borders.
“India stands to gain a lot if there is liberalisation in services like medical, law, audio-visual (like TV serials) but unfortunately such sectors have not articulated their demands in a formal manner,” says Ram Upendra Das of the New Delhi-based Research and Information System for Developing Countries. Richard Higgott, Professor of International Political Economy at the University of Warwick, supports such a view “especially if India floats it” and says “it could provide a breakthrough.”