A 7-Eleven in Japan might close for a day. Yes, that's a big deal. 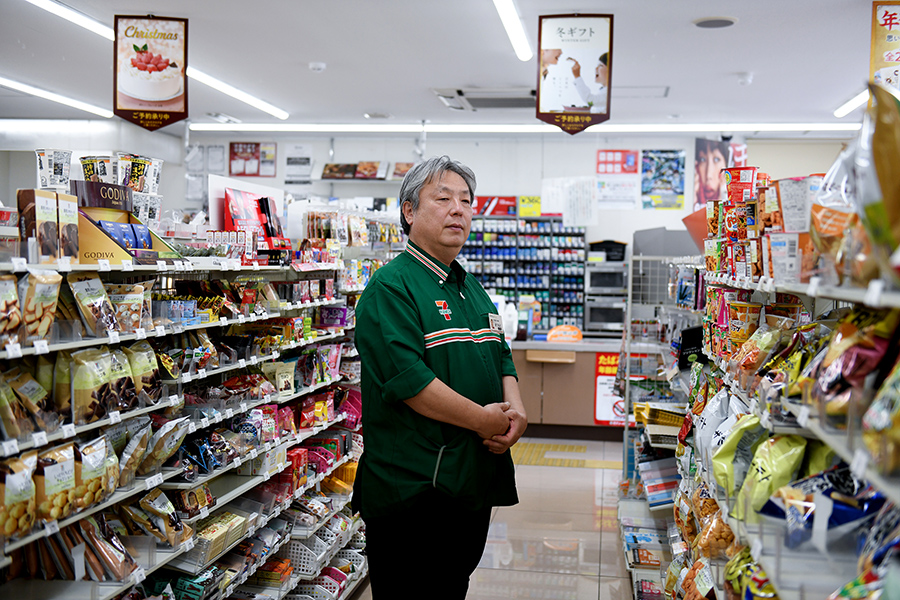 Mitoshi Matsumoto, who says that 7-Eleven's parent company is threatening to pull his franchise because he wants to close for New Year's Day, at his store in Higashi-Osaka, Japan, Dec. 25, 2019. The dispute has supercharged a national debate over the abusive business practices of the 24-hour convenience store industry in Japan, where a declining population has made workers harder to find. (Noriko Hayashi/The New York Times)

HIGASHI-OSAKA, Japan — Mitoshi Matsumoto, the most famous 7-Eleven convenience store owner in Japan, wants to do something unthinkable in his 24-hour, 7-day-a-week industry: Take a day off.

That’s why, he says, 7-Eleven is trying to put him out of business.

Matsumoto announced in November his plans to close up shop so he and his two full-time employees could take off New Year’s Day, Japan’s most important holiday, after years of working 14-hour days with few breaks. But on Dec. 20, 7-Eleven’s parent company told him that his store had received more customer complaints than any other in Japan. He had 10 days to address the issues, it said, or the location would be closed.

“They don’t want to let me take New Year’s off. That’s all there is to it,” said Matsumoto, 57, who has made a name for himself in Japan by publicly defying the company’s demands that franchisees stay open 24 hours. “If they allow me to do this, others will start rising up here and there.”

His decision in February to shorten store hours inspired other franchisees to demand that 7-Eleven allow them to do the same. But the company has been slow to change, he said, so he decided to take New Year’s off in protest.

The standoff has supercharged a national debate over the business practices of the country’s 24-hour convenience store industry. Japan’s declining population has made workers harder to find. Tales of punishing work schedules have struck a chord in a country that holds a sometimes lethal corporate devotion to working long hours.

Last year, the labor ministry approved 246 claims related to hospitalization or death from overwork, according to government statistics, which show the retail industry as one of the biggest sources of complaints. Another 568 workers took their own lives over job-related exhaustion.

But even as convenience store owners are suffering under increasingly long hours, the country’s three biggest convenience store chains — 7-Eleven, Lawson and FamilyMart — have been reluctant to change the 24-hour schedule that Japanese shoppers have come to expect.

In a letter to Matsumoto, 7-Eleven said it received 78 complaints about his store this year. In a statement, it said that the threat to sever the contract was based on the complaints and on the “destruction of the relationship of trust” caused by his criticisms on social media of 7-Eleven’s management.

Matsumoto and his supporters say 7-Eleven is trying to make an example of the man who has become the face of the resistance against a company that they say exploits their labor.

“Owners can’t organize, because the second you try, they home in on you and apply pressure,” said Reiji Kamakura, the leader of the Convenience Store Union, a small group that has struggled to gain members and change industry practices in the face of corporate opposition.

Though it got its start in Texas in the 1920s, 7-Eleven has been controlled by a Japanese company since 1991. Today, it operates nearly 40% of Japan’s more than 55,000 convenience stores.

That makes 7-Eleven an integral part of Japanese life. The government considers convenience stores part of the country’s infrastructure, like highways and sewers. They are expected to help promote regional tourism and to help with local policing by offering a safe place for people to flee to. Its stores can be called on to help distribute aid and supplies during a natural disaster.

The vast majority of Japanese 7-Elevens are owned by individuals like Matsumoto. The company provides them with a storefront and access to a logistics network that keeps its shelves full of rice balls, cigarettes and boxed lunches. It sets operating procedures with an eye toward protecting the brand and providing a uniform customer experience.

Among those demands, it tells franchisees to keep their stores open 24 hours a day, seven days a week, 365 days a year.

The model, pioneered by 7-Eleven, worked well enough for years. But about a decade ago, it began to break down.

Hungry for growth, 7-Eleven and its competitors began a war of attrition, flooding the country with more locations in an attempt to steal market share. Each new shop cut into its neighbors’ profits.

At the same time, Japan’s labor pool was shrinking, driving up hourly wages and making it difficult to find reliable workers. Many franchisees — who are responsible for paying their staff’s wages — were forced to work more of their own shifts.

For 7-Eleven, the cost of opening new stores was minimal. But for many franchisees, the numbers no longer added up.

Matsumoto, a former carpenter, opened his store in 2012, hoping to earn a more stable income. From the beginning, he said, he locked horns with the corporate management, refusing to follow suggestions from his regional manager about how much food to order or what items to stock.

In May 2018, his wife, who had also worked at the store, died. He began having trouble finding reliable staff. In desperation, he asked his son to come home from college to help.

Even so, Matsumoto was working 12-hour shifts. And sometimes much more.

Then, one day in February, he told 7-Eleven he was going to shorten his store’s hours from 6 a.m. to 1 a.m.

The company said that would violate his contract. He would lose his store and the tens of thousands of dollars he had invested in it. On top of that, he was told, he would have to pay the company a penalty of about $155,000 for breach of contract.

Matsumoto did it anyway. When the company threatened to close his store, he went to the news media.

Matsumoto admits he has received his fair share of customer complaints. He has sparred with people who he says left their cars for too long in the store’s small parking lot. He closed the bathroom to the public — a move virtually unheard-of in service-friendly Japan — because customers were not keeping it clean and sometimes locked themselves inside for hours. But in the past, he said, 7-Eleven’s regional staff worked with him to resolve the issues.

That wasn’t the case this time, he said. When he asked to see the complaints against him, he said, the company showed him only a few, saying there were too many to give him a complete accounting.

In its statement, 7-Eleven said that it had “repeatedly explained to the owner the actions that were in violation of his contract,” adding that he had yet to take action to correct them.

He suspects his activism played a part in the complaints. After his story went viral, people began to attack him on Twitter, accusing him of smearing the company’s image. His store has 270 reviews on Google Maps, many attacking his character. Virtually all of them were written after he appeared in the news.

Speaking privately, some 7-Eleven owners and employees say they admire Matsumoto, but few are willing to put their own shops on the line.

Nevertheless, the public outcry has given them some hope that the industry will change. Major chains have pledged to introduce some reforms. 7-Eleven has said it will experiment with allowing a few shops to reduce their hours. It pledged to give this New Year’s Day off to employees at 50 locations it operates directly.

Matsumoto hopes that franchised stores will close, too, in an expression of solidarity.

He met with representatives from the company on Sunday, but the two sides were not able to come to a satisfactory agreement, he said. Matsumoto said that if 7-Eleven went through with its threat, he planned to go to court.

The current system cannot survive much longer, he said, but 7-Eleven will not change unless the owners force it to. So far, no one has come forward.

Tweets by @forbesindia
In Photos: The stories behind the big films
Regional disparities in the Indian innovation ecosystem