A chance encounter in an elevator showed the candidate's easy rapport with a fan, striking a chord on social media 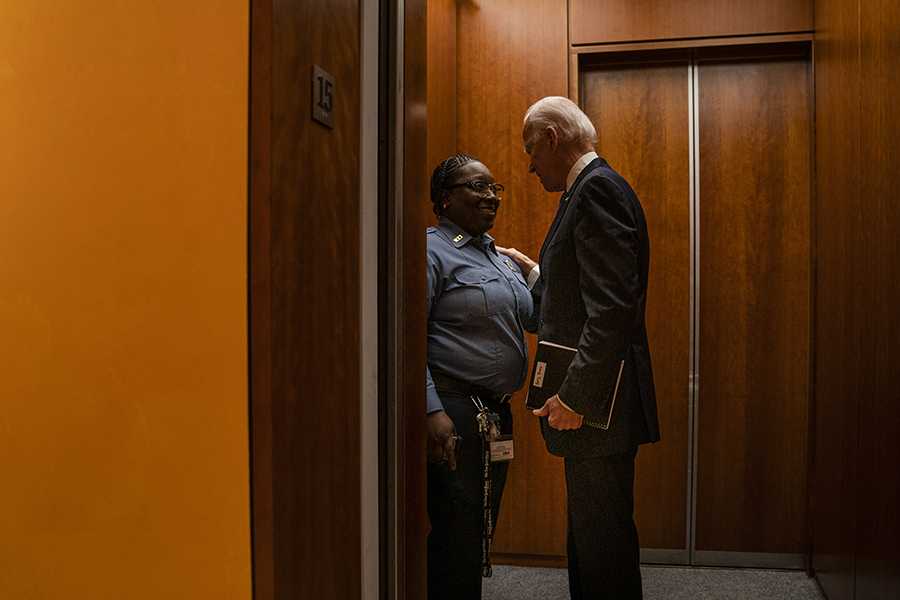 Former Vice President Joe Biden speaks with Jacquelyn, a security guard, at the New York Times building in Manhattan, Dec. 16, 2019. Months after their easy rapport struck a chord on social media, the Biden campaign asked Jacquelyn to be the first person to nominate him for president at the 2020 Democratic National Convention
Image: Brittainy Newman/The New York Times

It was an accidental viral moment for Joe Biden, at a time when his quest for the Democratic nomination seemed to be flagging. En route to an interview last year with the editorial board of The New York Times, Biden found himself in an elevator with Jacquelyn, a 31-year-old security guard who shyly admitted she was star-struck. “I love you,” Jacquelyn told the former vice president. “I do. You’re like my favorite.” Biden, smiling, asked if she had a camera. The two posed for a selfie on her smartphone. It was a fleeting exchange that happened to be captured by a film crew for “The Weekly,” an FX show produced in collaboration with The Times. Biden did not receive the paper’s endorsement during the Democratic primary — that went to Sens. Amy Klobuchar and Elizabeth Warren — but his easy rapport with Jacquelyn struck a chord on social media. On Tuesday night, Jacquelyn — who was identified using her middle name, Brittany, because Biden aides said she had declined to make her last name public — made a more deliberate appearance before a national TV audience. The Biden campaign selected her as the first person to enter Biden’s name into nomination for president at the Democratic National Convention, introducing her as “a working American who met Joe Biden in a most unexpected place — the elevator where she worked.” “I take powerful people up on my elevator all the time,” Jacquelyn told viewers in a prerecorded segment. “When they get off, they go to their important meetings. Me? I just head back to the lobby. But in the short time I spent with Joe Biden, I could tell he really saw me, that he actually cared, that my life meant something to him.” She spoke before an open elevator, though not the one in the Times building where she met the former vice president. “Joe Biden has room in his heart for more than just himself,” she said, describing Biden as “my friend.” Jacquelyn’s appearance at the convention underscored some of the themes the Biden team is keen to promote this week, including his support among working Americans, and Black women in particular. And her appearance nodded to what advisers believe is Biden’s chief political strength, a sense of empathy and ease with Americans from many walks of life. Jacquelyn is employed by The Times as a security guard. She has no role in the newspaper’s journalism or editorial page, and she is not bound by rules that prohibit many of the company’s employees from engaging in political activity. For Jacquelyn, the Tuesday cameo marked the culmination of an unusual and unexpected role in a national campaign. “I never thought I would be in a position to do this,” she told The Washington Post, which first reported on her role Tuesday. “I never thought I was worthy enough to do this.”