Amid the Covid-19 carnage, a handful of innovators have found out how to compete against Amazon and sell in the 21st century. Investors, consumers, and workers are all winning 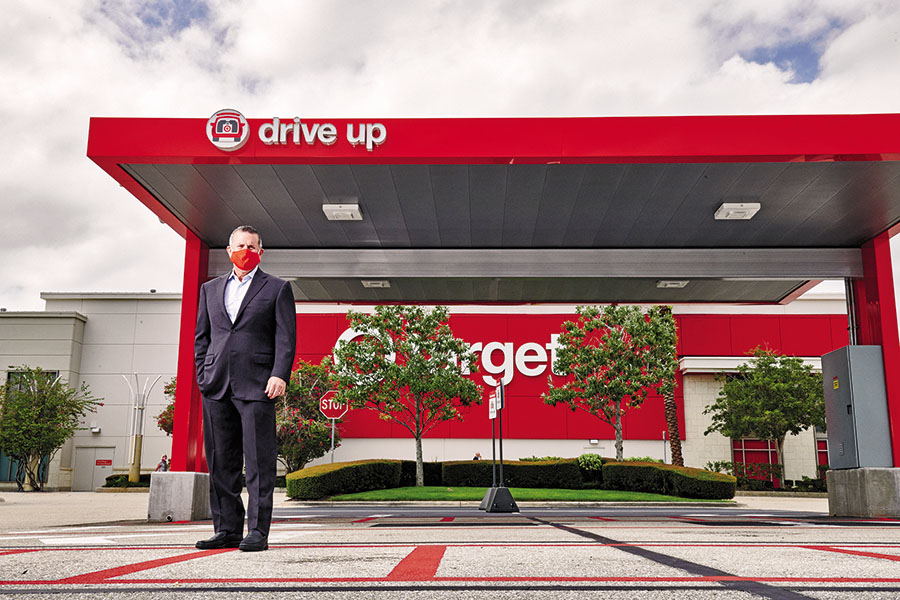 Target CEO Brian Cornell at a new curbside pickup station in Sarasota, Florida. “You can place an order, drive into over 1,500 parking lots and our team member will walk out and put it in your trunk, contact-free.”
Image: Jamel Toppin for Forbes 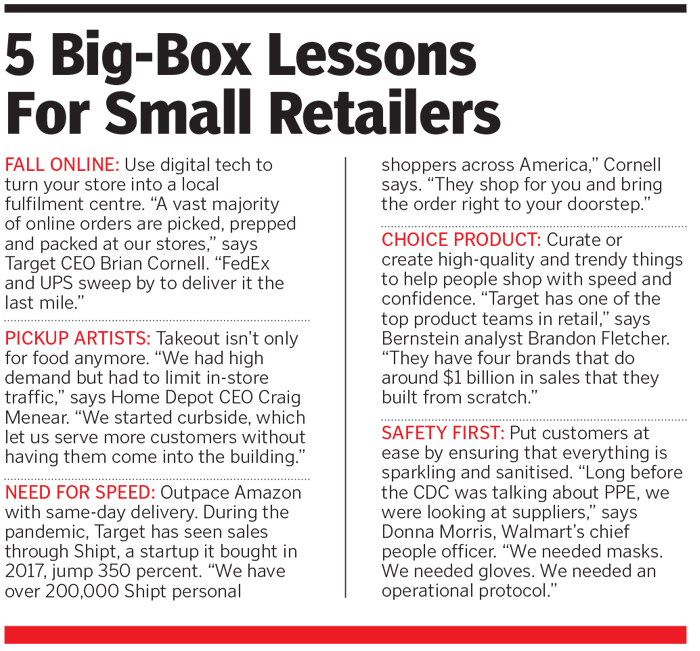 Few felt good about Target in 2014 when Brian Cornell was named CEO. At the company, which traditionally promoted from within, he was an outsider in more ways than one. He grew up in Queens, New York, under tough conditions. His father died when he was in elementary school. Heart disease put his mother out of work and his family on welfare. Grandparents pitched in; school and sports offered salvation. Cornell graduated from UCLA in 1981 and spent the next 30 years as retail’s version of a career military officer, relocating 15 times as he climbed the corporate ladder at Tropicana, Gallo Wines, craft store Michaels, Sam’s Club and two different tours at PepsiCo. He took over a Target in tatters. The previous year, a data breach had exposed the credit-card numbers of 40 million customers. Meanwhile, a poorly executed launch of 124 stores in Canada was racking up hundreds of millions in losses. Target, which had earned the upscale nickname “Tarjay” thanks to its high-quality products, was now saddled with shabby stores and stale brands. “They were quickly going the way of Kmart,” says Barclays analyst Karen Short. “The stores were messy and out of stock. Employees were unhappy.”  Cornell acted quickly, jettisoning the Canadian business and selling a chain of pharmacies to CVS to focus on fixing the US operation. The $7 billion plan that had sunk the stock in 2017 refreshed stores, gave customers new digital buying options and turned locations into warehouses for online orders. Target also launched dozens of fresh brands like clothing lines Goodfellow & Co and Universal Thread. “Target’s whole existence is to sell stuff that wasn’t Walmart fall-apart, but Target Tarjay,” Fletcher says. “Cornell went back to Target making really good stuff—good enough that people again call it Tarjay.”  Whatever you call it, Target’s ability to sell high-quality stuff via a high-quality experience is crucial if the company is to hold the ground it has won during the pandemic. Big-box retailers have found a formula that works—for now—with lessons for smaller retailers and other industries. The challenge: What happens when government stimulus recedes and a stir-crazy country can return in full force to restaurants, bars, hotels and travel.  And then, of course, there’s Amazon, which remains the elephant in every CEO’s home office. After its initial pandemic stumble, Amazon quickly hired more than 175,000 new employees and fortified its logistics network to get back on track. Second-quarter sales (which includes large non-retail divisions like AWS and advertising) exploded 40 percent. Even as these big-box retailers enjoy a stock boost, Amazon’s soaring valuation of $1.5 trillion is double the size of their market caps—combined. That gives it more than enough firepower to compete and disrupt on every front. The pandemic and its impact on consumer habits have only increased Amazon’s power and reach.  Cornell sees his edge both in his Tarjay cachet—and his arsenal of thousands of upgraded stores. “A few years ago, everyone said stores were obsolete. We took the other path, not because it was our opinion—it was what consumers were telling us,” he says. “Even during the pandemic, about 85 percent of all retail spending happened in stores. And now, I have 1,900 fulfillment centers across the country. That speed is essential.” Click here for the Forbes 'The Just 100' list, the third edition of the 100 companies showcasing the best corporate citizen