Bird Flu is Back in a Stronger Avataar

New research shows that the H5N1 virus can become contagious. But is the government prepared for a pandemic? 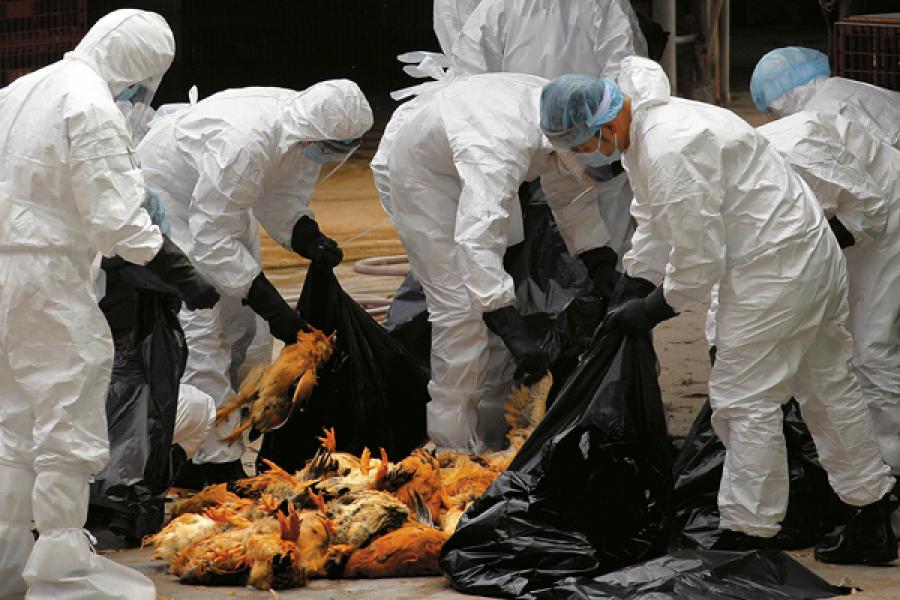 This may not be the influenza season, but news about the virus that causes the pandemic has been infecting us in the last few weeks. First, two academic groups published their much-debated research about a lab-engineered strain of bird flu (H5N1) that shows how it can acquire the ability to rapidly spread among humans, even though now it only hops from bird to bird. For six months, various agencies, including the World Health Organization, had debated whether public knowledge of this research would help fend off pandemics or aid bioterrorism. It was then followed by a slew of recommendations on preventive measures and preparedness, urging the governments and regulators around the world to enhance surveillance and collaboration.

On June 27, the medical journal Lancet published an analysis of the 2009 swine flu (caused by H1N1 strain, which had jumped from pigs to humans) deaths across 13 countries, rich and poor, which shows 284,400 people died in the first year, eight times the officially reported figure. It hints that the forthcoming analyses could reveal even higher numbers.

In this context, the new research that shows how H5N1, which can become contagious without mixing with other animal and human viruses (as was the case with previous pandemic viruses, including the Spanish flu of 1918), paints a prospect that is scary. It could become a reality in days or decades. There isn’t enough understanding today to accurately predict such events.

Still, the scientific community is not surprised. Since the influenza virus mutates very fast and can acquire new traits easily, anything can happen, says VM Katoch, director general of the Indian Council of Medical Research. Now that the specific mutations are public knowledge, the surveillance programme can keep a vigil on the virus for these mutations, he says.

But there is no active surveillance in the country. It’s mostly event based, says AC Mishra, director of the National Institute of Virology in Pune which monitors bird flu outbreaks.

This year has seen a 10-15 percent rise in bird flu and mortality, including deaths of crows in West Bengal and Jharkhand.

As for H5N1, over the last decade, this highly pathogenic virus has emerged among chickens and has rarely jumped to humans. Since 2003, about 600 confirmed human cases have been reported from over a dozen countries, 60 percent of which have resulted in deaths. But it’s believed this virus will eventually become more transmissible to and from humans.

After the 2009 pandemic, says Katoch, “there’s been tremendous increase in the capability” to detect viruses. Three years ago there was no state-level lab; today 20 labs exist, 16 of which are functional. In five years, there will be 250 such labs, he says.

These labs improve the response time, no doubt, but there are other lessons from 2009 that apparently have not been heeded. Between March 2009, when the first case was detected in Mexico, and October 2009, when the vaccine was finally ready to be distributed in the developed world, Indian health authorities and vaccine manufacturers worked closely to develop doses in large quantities.

Three companies, Bharat Biotech, Serum Institute and Panacea Biotec got Rs 10 crore each to build technology platforms and ramp up manufacturing capacities. But once the pandemic fear subsided, the government refused to procure the vaccines. However, “indigenously developed H1N1 vaccines” did get a mention in Pratibha Patil’s presidential address.

“The supply time was shortened from six to two months. Naturally, we couldn’t comply, but all of us had already invested much more than Rs 10 crore that was given to us. Till today the stocks are lying. Serum [Institute] even filed a court injunction for that payment,” says Krishna M Ella, chairman and managing director, Bharat Biotech. The next time such events occur, the industry would be very wary, he says.

Preparing for a pandemic is no less than preparing for defence for a country. And vaccines, which are arguably weapons of mass protection, should be treated like defence stockpiles.

War or no war, armed forces keep their stocks. In the set of recent journal publications, experts recommend scaling up of vaccine manufacturing capabilities and technologies so that the vaccine development time is shortened from six months to one or two weeks.

Unlike 2009, where the Centers of Disease Control in Atlanta provided the H1N1 strain to India for vaccine development, if there’s an H5N1 outbreak, international agencies would be scared of shipping samples as it’d be highly risky, warns Ella. What’s more, unlike H1N1, which was treated initially by Tamiflu (a tablet), H5N1 will require a vaccine.

It’s time to start building roadmaps, even if theoretical, says Ella. “There should be strategies for both eventualities—what if it’s real, what if it remains a distant threat? All viruses, H1N1 or chikungunya, are spreading faster and becoming more virulent.”

Since some key protocols remain unpublished, maybe the government should start working on collaborating with global agencies. Audit of facilities, development of reagents, quality control assays and hunt for adjuvants—chemicals that enhance the immune system and help maximise doses—shouldn’t wait for the last minute.

Katoch agrees there “needs to be a strategic thinking” but doesn’t confirm if there’s one already. Understandably, the buck stops at the health ministry. One of the key organisers of the 2009 emergency vaccine development programme, Katoch says he “isn’t aware that the vaccines were not procured from the manufacturers.”

“The stockpile has to be maintained and we’d like to see the faith between the industry and the government is maintained,” he says.