According to data released on Friday, China continues to grow at its slowest pace in three decades, as the trade war with the United States and a host of other problems leave Beijing struggling to meet its goals 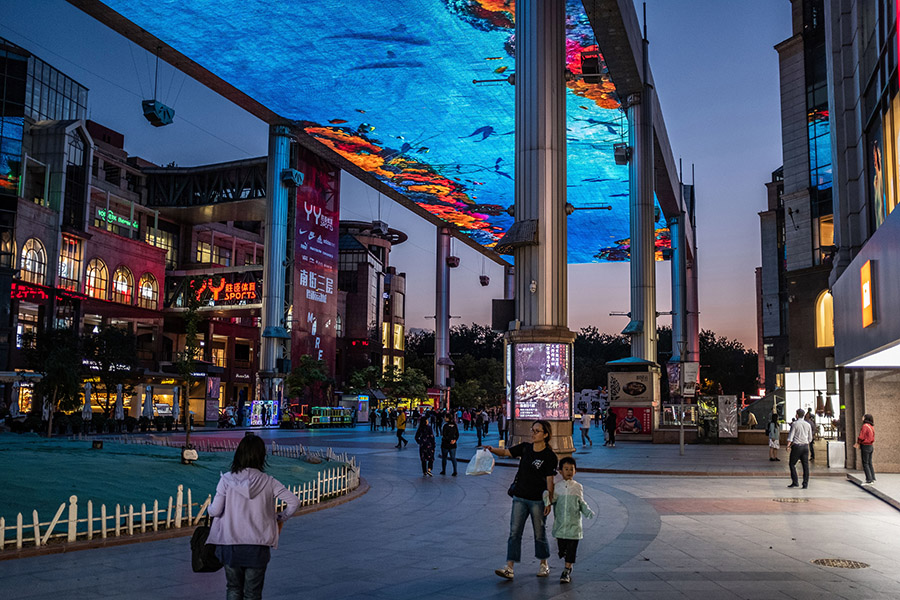 The central business district in Beijing, May 19, 2019. China’s economic slowdown worsened in the July-to-September period, according to data released on Friday, as the trade war with the United States and a host of other problems leave Beijing struggling to meet its goals. (Lam Yik Fei/The New York Times)

SHANGHAI — China’s economic slowdown worsened in the July-to-September period, according to data released Friday, as the trade war with the United States and a host of other problems leave Beijing struggling to meet its goals.

The figures show China continues to grow at its slowest pace in nearly three decades of modern record-keeping. While China is still expanding faster than any other major economy, Friday’s data suggests that the pace could come in at the low end of Beijing’s official target, which could add to worries about broader prospects for global growth.

China's efforts to tame its addiction to lending and the deepening impact of the trade war have been major drags on the economy. Other problems are worsening, as the country’s vast automotive sector shrinks, as its real estate sector levels off and as its pigs die in vast numbers from a swine fever epidemic.

China’s growth was set to slow down from the torrid pace of past years. Its economy is now twice the size it was about a decade ago. Its labor force is shrinking, and the country is already full of roads, rails and factories, limiting potential new investment.

The question is whether there are any sharp dips along the path to ever-slower growth.

“What policymakers want is to make the process as long and as gradual as possible,” said Larry Hu, the head of China economics at the Macquarie Group, a big Australian financial services company. “The biggest challenge is to find new growth drivers from consumption and technology, as old ones such as property and globalization are fading out.”

The trade war is adding to that uncertainty, although China’s problems go beyond that.

The conflict heated up in the third quarter of this year, when President Donald Trump broadened his tariffs at the start of September to hit many consumer goods from China. Its exports to the United States plunged 22% in September compared with September 2018, when exporters were racing to ship their goods ahead of a previous set of tariffs.

Still, U.S. tariffs account for only part of China’s overall economic slowdown. Exports to the United States are about 4% of the Chinese economy. Roughly half the value of those exports stems from imported goods like semiconductors and oil, said Nicholas Lardy, a longtime China specialist at the Peterson Institute for International Economics, so the net impact of exports to the United States is even less.

China also has ramped up exports to the developing world. As a result, its overall exports in September were down only 3.8%.

In fact, much of the slowdown has been domestic. China has been reluctant to plow more money into its economy in the form of lending, which has already saddled its financial system with burdensome debt.

Other areas have weakened, too, like the auto industry, as consumer confidence has eroded. Car sales are 5% of China’s economic output, according to official statistics, meaning they play a bigger role in China’s growth than exports to the United States. Even foreign companies like General Motors assemble practically all their cars locally, with almost entirely Chinese-made parts.

But these days, households in China just aren’t buying cars the way they used to.

The Chinese Passenger Car Association announced Saturday that retail car sales fell 6.6% in September from a year earlier, a sharp drop for an industry once accustomed to double-digit annual percentage growth.

The car sales slump started in the summer of 2018 and became severe by winter. While most auto industry experts expected sales to start looking better by this summer, that has not happened.

Cui Dongshu, the secretary-general of the car association, said September at least was not as bad as some recent months. “The sales are recovering but very slowly, due to weak consumption,” he said. “The purchasing power of families is still not enough.”

Chinese automakers had planned to export a lot of cars to the United States starting this winter. But Trump’s tariffs have made that much harder and have prompted one carmaker, Guangzhou Auto, to suspend indefinitely its plans to enter the American market.

Property market weakness has also pinched growth, hurting consumer sentiment. A decadeslong run-up in home prices gave many in China, where the homeownership rate is high, the feeling that they were becoming prosperous enough to splurge on other purchases. But prices have mostly stabilized, and even fallen in some smaller cities, and many families are struggling with large mortgage payments.

China’s biggest challenge may be slower investment. The country’s roads, bridges, high-speed rail lines and ports are superb. Its factories are among the largest in the world. But having already spent so much, government agencies and companies alike are having more and more trouble finding opportunities to invest more.

Global firms are showing less interest in the Chinese market and in some cases even starting to pull back.

“We have seen a significant divestment by multinationals in this part of the world in the past 18 months,” said Mark Webster, a partner in the Shanghai office of BDA Partners, a New York investment bank that specializes in Asia deals.

The trade war is just part of the problem. Multinationals complain of much tighter regulatory actions in China, particularly antitrust cases. They also encounter extensive overcapacity in many industrial sectors, forcing companies to cut prices repeatedly to stay in business and destroying profit margins.

The volume of mergers and acquisitions by foreign companies investing in China tumbled 89% in the first half of this year from the same period last year, to just $6.3 billion, Webster said.