China's tech workers are sick of the '996' hustle culture

The country's richest Internet moguls think employees should work more; workers are organising against the '996' culture: 9 am to 9 pm, six days a week

By Lin Qiqing and Raymond Zhong 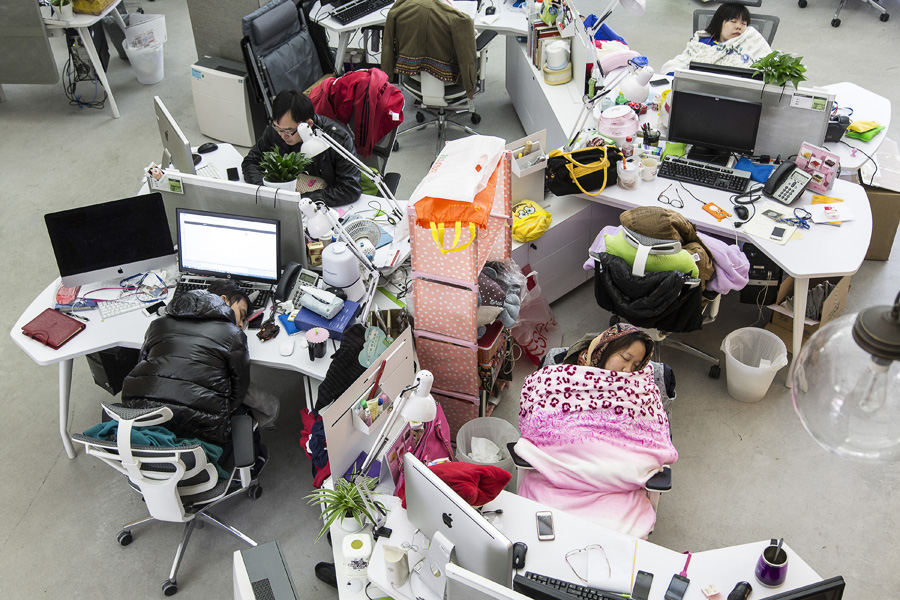 Employees take naps during lunch hour at Tencent in Guangzhou, China, Dec. 24, 2013. Rank-and-file tech workers, discouraged by a weakened job market and downbeat about their odds of joining the digital aristocracy, are organizing online against what in China is called the “996” culture: 9 a.m. to 9 p.m., six days a week. (Qilai Shen/The New York Times)

Jack Ma, a founder of the e-commerce titan Alibaba, called long work hours “a huge blessing.” Richard Liu, who runs the Alibaba rival JD.com, said people who frittered away their days “are no brothers of mine.”

Rank-and-file tech workers in China, discouraged by a weakened job market and downbeat about their odds of joining the digital aristocracy, have other ideas.

For years, Chinese tech employees have worked hours that make Silicon Valley’s workaholics seem pampered. Now they are naming and shaming employers that demand late nights. Some programmers are even withholding their creations from companies that they think overemphasize 996.

“Ten years ago, people rarely complained about 996,” said Li Shun, a former employee at the search giant Baidu who left to found an online medical startup. “This industry was booming once, but it’s more of a normal industry now. There are no more giant financial returns. Expecting people to work a 996 schedule on their own like before isn’t realistic.”

Unusually for China — where independent labor unions are banned and the government comes down hard on populist movements it does not control — the movement is gaining traction.

Ma softened his remarks. An industrywide conversation has begun. An open letter, sent Monday to China’s Ministry of Human Resources and signed by 74 lawyers from around the country, urges the government to properly enforce labor laws.

Even Chinese state media has called on employers to ease back.

“Under the pressures of a slowing economy, many companies are faced with questions about their survival, and their anxiety is understandable,” a commentary in the People’s Daily, the Communist Party mouthpiece, said. “But the solution is not to make employees work as much overtime as possible.”

Angst about 72-hour workweeks speaks to a deeper gloom in China’s digital industries.

Not so long ago, 996 symbolized possibility for Chinese tech entrepreneurs. Their country had the vast market. And increasingly, it had the engineering talent. The secret ingredient, the one that supposedly set China’s companies apart from Silicon Valley’s, was the hustle.

While China requires overtime pay, the laws are haphazardly enforced and the tech industry usually insists workers are committing their time voluntarily.

But hustle is harder to demand of workers in a bear market. Internet darlings have laid off employees. A torrent of venture investment in tech has slowed to a trickle. As China’s internet industry matures, giant companies like Alibaba and Tencent are looking more like monopolists whose world-swallowing dominance leaves little room for upstarts.

In China, “there’s not a lot of hope for runners-up anymore,” said Max Zhou, a co-founder of a Beijing mobile software startup called MetaApp. As a result, he said, smaller companies can no longer use a sense of grander purpose to motivate workers to sacrifice their personal lives.

“Most companies don’t have a dream anymore,” Zhou said. “They can only try to fabricate something for their employees.”

The 996 debate started last month with a simple post on GitHub, an online community where programmers around the world share code and software tools. An anonymous user posted under the screen name “996icu,” a reference to the place where such hours take engineers: the intensive care unit.

The 996.ICU GitHub repository — basically a folder for a project’s files — has since been “starred” more than 230,000 times, indicating people’s level of interest. Hundreds of fed-up tech workers have contributed to the GitHub project. Others have assembled on messaging and social media apps, with little centralized coordination.

The Chinese government is eternally fearful of spaces where mass discontent can simmer. It has long barred access to Facebook, Twitter and other global platforms. Years ago, China briefly blocked GitHub, too, but engineers protested and the site was unblocked. GitHub, which is owned by Microsoft, has a policy of posting any takedown requests it receives from governments.

Nagi Zhuge, an engineer at a startup in the southern province of Hunan, has lived the 996 life for the last two years.

“My colleagues are too afraid to go home after work,” Zhuge said. “As a junior employee, I can’t be the first to leave.” He is now an active contributor to the GitHub project.

Across the different groups, the basic strategy is to push, but not so hard that the Chinese government feels compelled to react.

That means no strikes and no demonstrations. In one group on the messaging app Telegram, references to Marx and Lenin are forbidden. The philosophies of communism’s leading lights often run contrary to the way China is run today. The government cracked down against a labor rights movement in the tech hub of Shenzhen this year.

Instead of sit-ins, the tech workers are harnessing the power of memes, stickers and T-shirts. Some have pushed for a holiday to celebrate beleaguered software engineers. Zhuge is rallying workers to mail paper copies of China’s labor law to Ma of Alibaba.

“We’re expressing ourselves very gently, as programmers tend to do,” said Suji Yan, the founder of a startup in Shanghai called Dimension.

Tweets by @forbesindia
Boeing chief seeks to reassure shareholders on 737 Max safety
The art (and science) of the bounce back: Organizational lessons from UVA's historic national championship