A specially filmed version of "Diana: A Musical," a new show about the ill-fated British princess, will stream ahead of its debut on Broadway 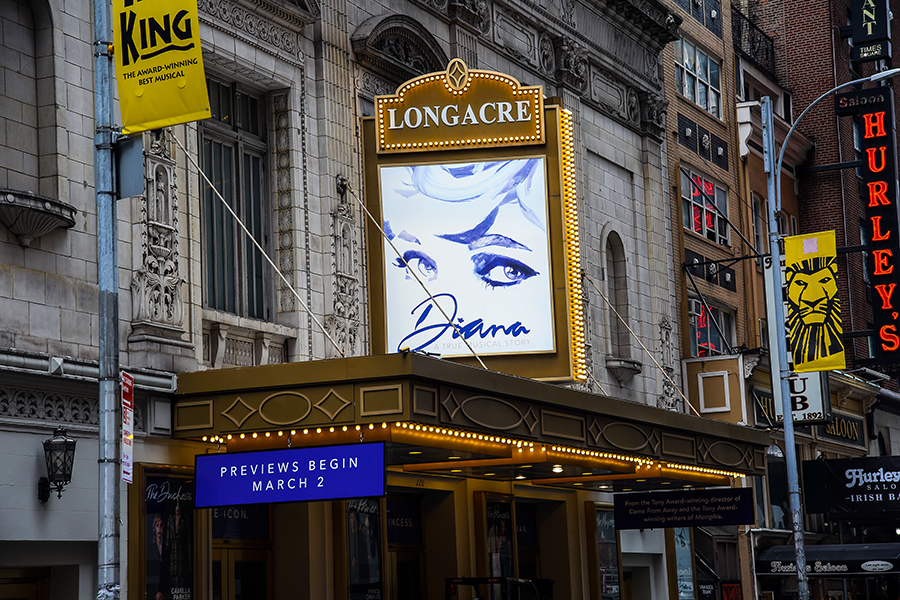 Theatre marquee for "Diana - A True Musical Story", a musical about Princess Diana, at the Longacre Theatre on January 13, 2020 in New York City.  (Photo by Walter McBride/Getty Images)

With Broadway still shuttered, Netflix is doing for the theater community what it and other streaming services have done for the movie business: airing content that can’t be seen where it was initially intended. On Wednesday, the company announced that it would stream a specially filmed version of “Diana: A Musical,” a new show about the ill-fated British princess, ahead of its debut on Broadway. “Diana” began previews March 2, with its opening scheduled for March 31 at the Longacre Theater, only to be shut down because of the COVID-19 pandemic. It will be recorded without an audience at the Longacre next month and will feature the original Broadway cast, including Jeanna de Waal as Diana, Roe Hartrampf as Prince Charles, Erin Davie as Camilla Parker Bowles and Judy Kaye as Queen Elizabeth. A promotional message added to the musical’s website Wednesday morning said it would be “Coming to Netflix in Early 2021.” Christopher Ashley, the artistic director of La Jolla Playhouse, where the show originated, is the director of the musical, for which Joe DiPietro and David Bryan, 2010 Tony Award winners for “Memphis,” wrote the script, music and lyrics. The show was capitalized at up to $17,750,000. “We speak for the entire company when we say that we couldn’t be more excited to finally be able to share our show with theater lovers everywhere,” the lead producers, Beth Williams, Frank Marshall and the Araca Group, said in a joint statement. “Though there is no substitute for the live theater, we are honored to be a part of the quality entertainment that Netflix provides its subscribers worldwide.” The statement said the musical still planned to open on Broadway, now on May 25, 2021. And in a separate statement Wednesday, Actors’ Equity Association, the national labor union, said it had approved a safety plan that would allow for the actors in “Diana” to rehearse, record a cast album and mount a performance for recording. With very few exceptions, the union has barred its members from performing live onstage during the pandemic, arguing that it risks their safety. The provisions of the plan include initial and recurring testing, an isolation protocol for the actors and stage managers, and changes to the theater’s air-conditioning system to ensure ventilation to the backstage areas of the building. Netflix has showcased theatrical works before, streaming “American Son,” starring Kerry Washington, in 2019. Ryan Murphy is trying to finish his film adaptation of the Broadway musical “The Prom,” which was scheduled for release in 2020. Disney+ proved last month that consumers would happily watch theatrical content on their home screens, with the opening of the online version of “Hamilton” increasing the service’s downloads by 74% during the Fourth of July weekend compared with the previous four weekends.