Five lessons on anti-trust from Microsoft

As trouble could loom for tech giants Google, Facebook, Amazon and Apple, they could look towards the journey of Microsoft, which faced the government's ire in the 1990s, leading to a bruising battle in federal court 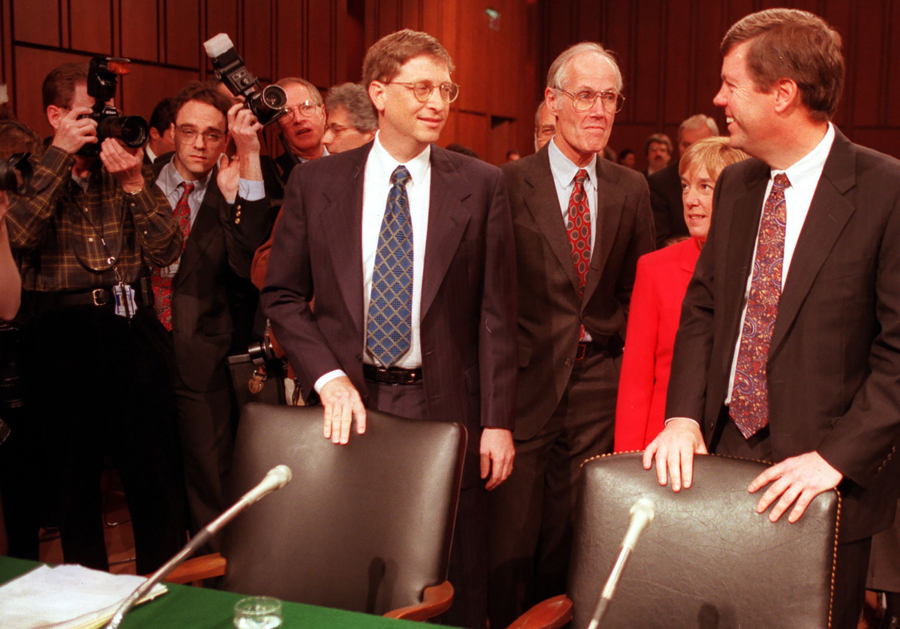 The nation’s antitrust enforcers and Congress are stepping up their scrutiny of the tech giants. Disruptive investigations, federal lawsuits and new rules could loom for Google, Facebook, Amazon and Apple.

The companies and their executives don’t need to look far for guidance about how this could all play out. One of their top competitors, Microsoft, faced the government’s ire in the 1990s, leading to a bruising battle in federal court. The company was found to have repeatedly violated the nation’s antitrust laws, and it agreed to change its corporate behavior as part of an eventual settlement.

“The Microsoft case is incredibly front and center, the road map, in all these discussions about big tech and antitrust,” said Andrew I. Gavil, a law professor at Howard University and co-author of “The Microsoft Antitrust Cases: Competition Policy for the Twenty-First Century.”

Interviews with several of the people at the center of the government’s case against the company, as well as antitrust experts, suggest that tech executives will need to be careful and flexible in navigating their turn in the cross hairs.

Here are five lessons that today’s executives might want to take away from the Microsoft experience, according to the people who lived through it.

1. Antitrust law may be old, but it can apply to the modern era.

There was a great deal of skepticism about that when the Justice Department and 20 states sued Microsoft in 1998. The tech world was young, fast and freewheeling. Old antitrust laws from the 19th century, created in an industrial era of corporate trusts, when deals were done in smoke-filled railroad cars, could never keep pace, the thinking went. Determining winners and losers was best left to the marketplace.

That view was supported by the previous big antitrust case in tech, against IBM. Filed in 1969, the suit was simply dropped in 1982. It was regarded as a 13-year misadventure. Robert H. Bork, a leading antitrust expert at the time, termed it the Justice Department antitrust division’s “Vietnam.” A few years before it was finally abandoned, even one of IBM’s competitors called the case “a historical curiosity.”

In the Microsoft case, the government was able to fashion traditional antitrust law to the digital age, by obtaining enough evidence and casting the company as a bullying monopolist.

The federal government and states demonstrated that “antitrust law works,” said Sen. Richard Blumenthal, who was the attorney general of Connecticut during the Microsoft investigation and trial.

For decades, the litmus test of consumer harm in antitrust had been high prices charged by a dominant company. But the Microsoft case departed from that convention, defining harm broadly as stifling competition by upstart rivals and thus impeding the arrival of innovative new products and services.

The main focus of the case was Netscape, the commercial pioneer in browsing software. Microsoft regarded the newcomer as a threat to its grip on the market for desktop personal computer software and its operating system, Windows. One tactic Microsoft employed was to bundle its browser, Internet Explorer, to Windows, which held more than 90% of the personal computer operating system market. The additional charge for Internet Explorer? Zero.

“The case didn’t hang on pricing, and it couldn’t,” said Rebecca Henderson, an economist at the Harvard Business School, who submitted expert testimony on behalf of the government. “It was the threat to competition and future innovation.” Microsoft declined to comment for this article.

That point resonates today. Google and Facebook offer their services to consumers free. But as the Microsoft case shows, free is not a free pass from antitrust.

“It always seemed to me that Microsoft waged a kind of holy war,” said A. Douglas Melamed, who was the second-in-command at the Justice Department’s antitrust division during the investigation and trial. “Their attitude was: We’re tech. We’re innovators. We understand this industry. There’s plenty of competition.”

Microsoft could have settled, but resisted. David Boies, who was recruited as the Justice Department’s chief litigator, initially thought that the case should be settled. Get Microsoft to agree to refrain from some anti-competitive behavior, he figured, and do not risk losing in court in a detail-filled technology case against a company with an all but unlimited budget for legal talent.

But Boies said his view changed as more evidence surfaced. For example, a senior Microsoft executive, in a private meeting, described the software giant’s strategy against Netscape as a campaign to “cut off their air supply,” according to witness testimony.

Boies said that in an antitrust case, the corporate target begins with a “huge knowledge advantage, but that will erode” as the inquiry proceeds. If the facts look incriminating, he said, the best course for a defendant is to “settle early before the other side knows what you do.”

Antitrust cases are built on facts and evidence, but also legal theory and the climate of the times.

Early in the pursuit of Microsoft, Netscape and its allies faced an uphill struggle trying to enlist public support for its cause. Microsoft was a tech superstar, Bill Gates was a business hero, and its products were used by hundreds of millions of people every day. Why punish success?

But gradually, government officials, politicians and other companies became convinced that Microsoft’s power should be curbed to keep the door open for innovators.

The idea was to rally support broadly and create “safety in numbers” for potential industry witnesses, recalled Christine Varney, an antitrust expert and a former Federal Trade Commission commissioner who served as an outside counsel to Netscape.

Today, the big tech companies face more antagonism than Microsoft did at the outset. They are under fire for their role in undermining privacy, distributing disinformation and thwarting competition.

So far, U.S. antitrust authorities have been far less aggressive than their European counterparts in challenging the tech giants. But that could change if public concerns intensify, more complaints surface and evidence accumulates.

“And if they do take bold action, the political system will not trash them,” said William Kovacic, a law professor at George Washington University and former chairman of the FTC. “No one will be accusing them of trying to destroy a national treasure.”

5. The Microsoft case changed the industry … or so it seems.

There is no way to know what would have happened without the Microsoft case. Some believe that it mattered little. Technology surged on. Search, smartphones and social networks became the new platforms.

David B. Yoffie, a professor at the Harvard Business School and a former Intel board member, used to be in that camp.

But his thinking has changed, Yoffie said, as he has studied the early years of Google’s rise. Without the restrictions on its behavior that were in the settlement in 2001, Microsoft could have unleashed the tactics it used against Netscape, like pressuring personal computer makers to agree to exclusive deals that would feature Microsoft’s Bing search service and exclude Google search.

“Google may have never emerged in its current form if Microsoft had not been restrained,” Yoffie said.

Of course, Microsoft eventually found a new path. It missed the shift to smartphones and its Bing search service trails well behind Google. But under Satya Nadella, who became chief executive in 2014, Microsoft has made the transition to catch the next big wave in tech platforms — cloud computing.

In the cloud market, Microsoft is a strong and fast-growing No. 2, behind Amazon, safely outside the gaze of antitrust watchdogs. Last week, with its shares up a bit, the market value of Microsoft’s shares topped $1 trillion, ahead of the other tech giants.

Pointing to that performance, Yoffie added another lesson from the Microsoft case.

“An antitrust battle,” he said, “doesn’t necessarily spell doom for any of these big tech companies.”

Tweets by @forbes_india
Tensions escalate as Trump imposes new economic sanctions on Iran
How are banks and other institutions helping MSMEs grow?