Here are some of team Forbes India's favourite movies in 2020 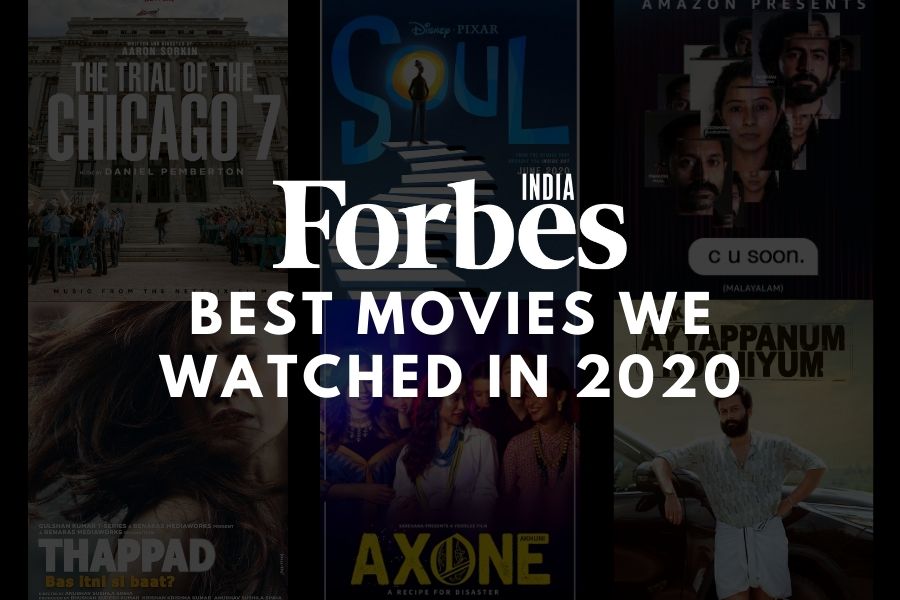 As avid cinema goers we were all quite bummed when Covid-19 brought about an end going out, but thanks to OTT platforms we experimented and watched films across genres and languages. From a shot-on-phone film like C U Soon to Disney Pixar's Soul, and critically acclaimed Aaron Sorkin’s The Trial of the Chicago 7 to Anubhav Sinha's Thappad… here are our 2020 favourites: 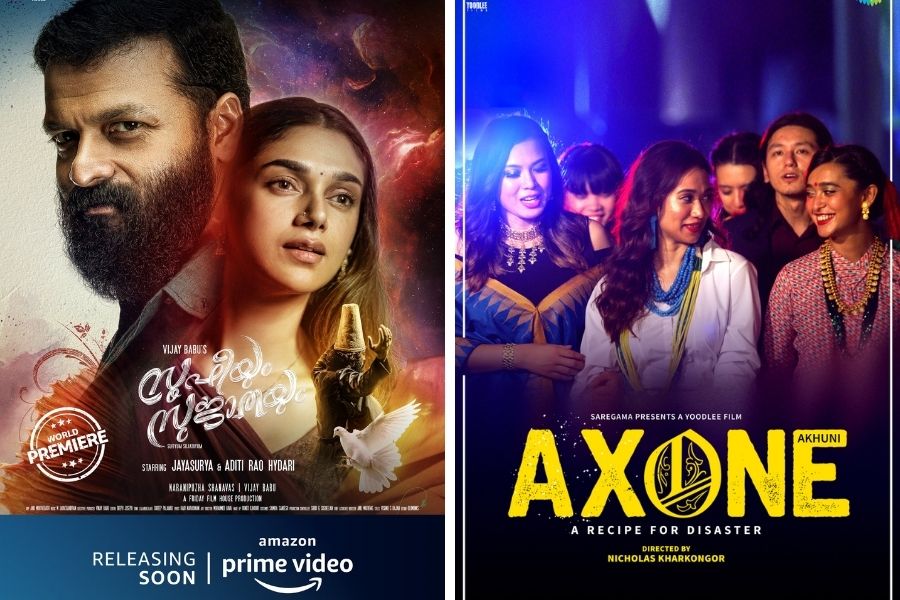 Brian Carvalho's picks: Sufiyum Sujatayum Critics may have labelled the story of a mute Sujata falling in love with a sufi as hackneyed, affected and perhaps even delusional in the times we live in, but perhaps it was the scenic escape hatch that Sufiyum Sujatayum provided that did the trick. Soulful music and the lyrical cinematography, coupled with mostly memorable performances, kept me engaged in this slow-paced two-hour, almost mystical, love story that you are aware at the outset isn’t going to end well. Tragedy spilled over to real life with director Naranipuzha Shanavas’ untimely death two days before Christmas. Axone: A Recipe for Disaster Any migrant trying to cook meat in a vegetarian neighbourhood in the big cities would relate to Axone (pronounced Akhuni). The film gets its name from a Naga pork delicacy that some would consider fragrant, others rancid. Through the simple story of a group from the North East planning to stir up a wedding surprise for a friend, Nicholas Kharkongor tackles a variety of issues that youth from the seven sisters (and one brother) come up against in cities like New Delhi. Racist and sexist taunts, the difficulty of the ‘sons of the soil’ in empathising with ‘alien’ cultures and the less-obvious inter-migrant tensions (one of the girls from Nepal can’t stand the smell of Axone) come through in stark hues in this film that explores relationships–among friends and with food. 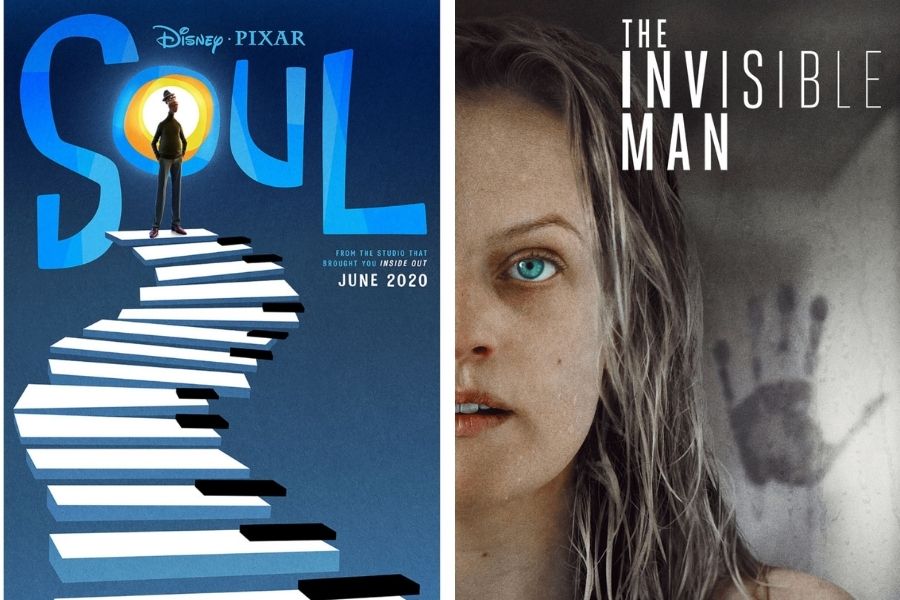 Rucha Sharma's picks: Soul 'Soul' is not just the best animated movie of 2020, it is also one of the best movies of the year. Like any other Disney Pixar movie, 'Soul' also carries a message and demands introspection. It asks you to figure out what are the things in your life that make it worth living? It asks you to go beyond passion and to seek to broaden your views towards the purpose of your soul. Apart from the story, the unlikely collaboration between Jon Batiste (jazz) and Trent Reznor and Atticus Ross (new-age) gives one of the biggest satisfactions in this wonderful film. The Invisible Man This is director Leigh Whannell's masterpiece. He took an old concept and put a modern spin to it. The movie is so tightly filmed that you do not have the luxury of even blinking your eyes. Even the sizzling crackle of fried eggs serves as a shock factor. It will be an understatement to say that 'The Invisible Man' keeps you glued to the chair. But the real horror of the movie is the simplistic presentation of domestic violence, abusive relationships, and gaslighting the victim — a woman. 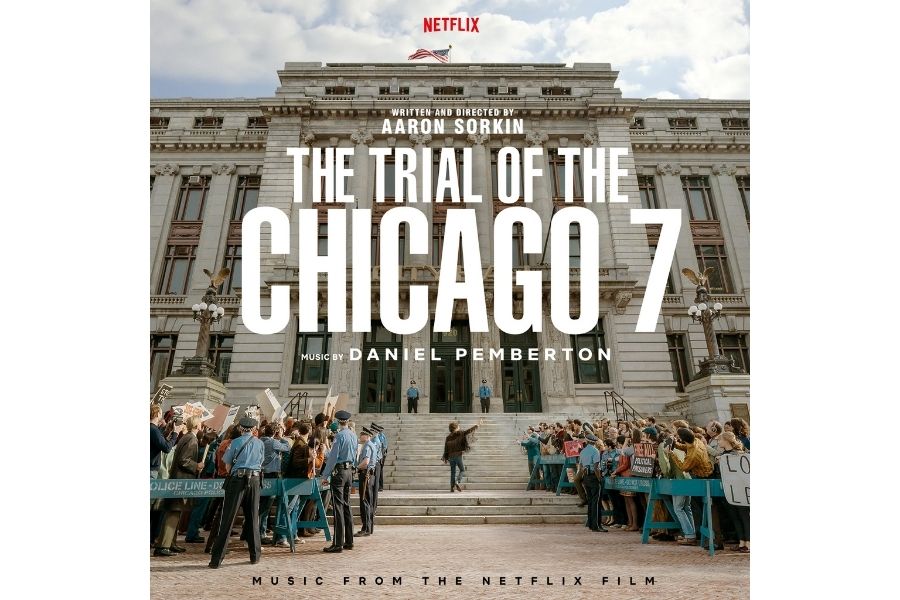 Kathakali Chanda's pick: The Trial of the Chicago 7 Aaron Sorkin’s taut legal drama, based on the 1969 trial of seven anti-war activists charged with inciting a riot during the Democratic Convention in Chicago, resonates even in the summer of 2020—in a world riven by social, political and economic divides. Poignant courtroom proceedings, laced with wry humour, often pushes the viewer to the edge of despair before ending with a note of resilience, of the civil society pushing back against state excesses. A must-watch and a much-needed glimmer of hope in what surely has been the annus horribilis in the lives of most of us. 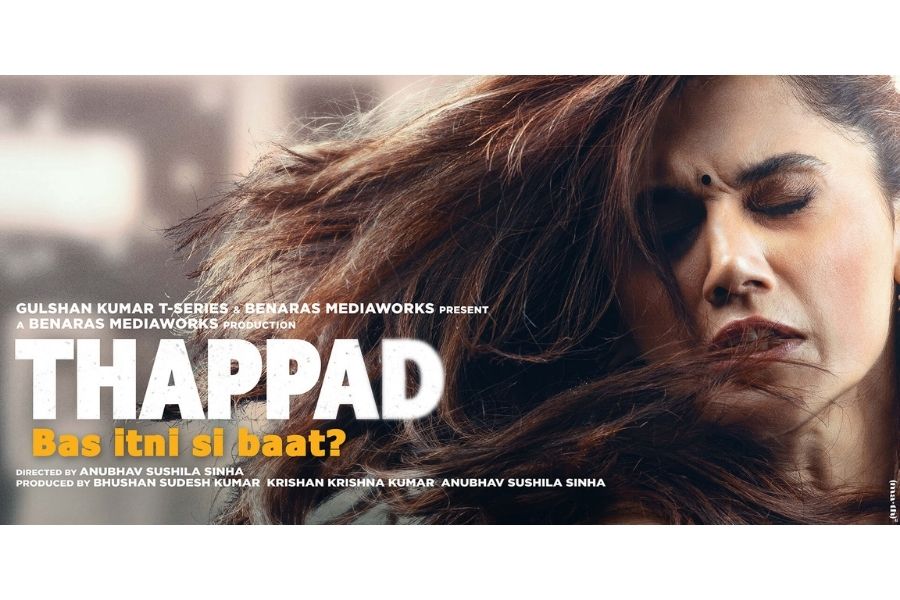 Naini Thaker's pick: Thappad: Thappad is a story about Amrita Sabharwal, a homemaker happily married to her husband, Vikram, till he slaps her at a party. The film, starring Taapsee Pannu and directed by Anubhav Sinha, was probably one of the best films I've seen in 2020, also the last one in a movie theatre. Though her husband had never abused her before or cheated on her, she decides to file for a divorce because, “it’s just a slap, but he can't hit me”. I remember getting goosebumps when she said this. The film is a much-needed jab at the age-old tradition of people saying, "shaadi mein toh yeh sab chalta rehta hai" (things like these keep happening in a marriage). I distinctly remember audience members shouting, “what is wrong with her?” and I wanted to turn around and shout back, “What is wrong with you!” All in all, a beautiful film with a fantastic storyline and relatable characters played by Pannu, Ratna Pathak Shah, Kumud Mishra, Maya Sarao and Geetika Vidya. 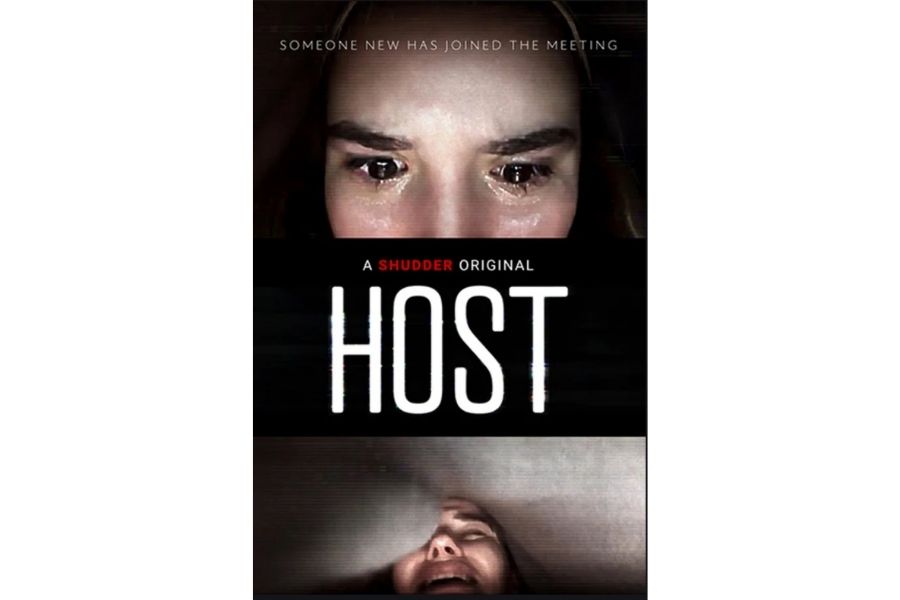 Aishwarya NK's pick: The Host For a film that is only 53 minutes long, and shot entirely from home, The Host does a fantastic job at making the plot seem as authentic as can be. The story of the film revolves around a group of friends who conduct a virtual seance and get caught in a nightmare when things turn awry. It is unique in the sense that it's a horror film where the spirits travel through WiFi. Yes, Wifi. While you can't help but wonder why none of them would turn the router off, the Zoom call based layout of the entire film does make it seem all the more real, in 2020. 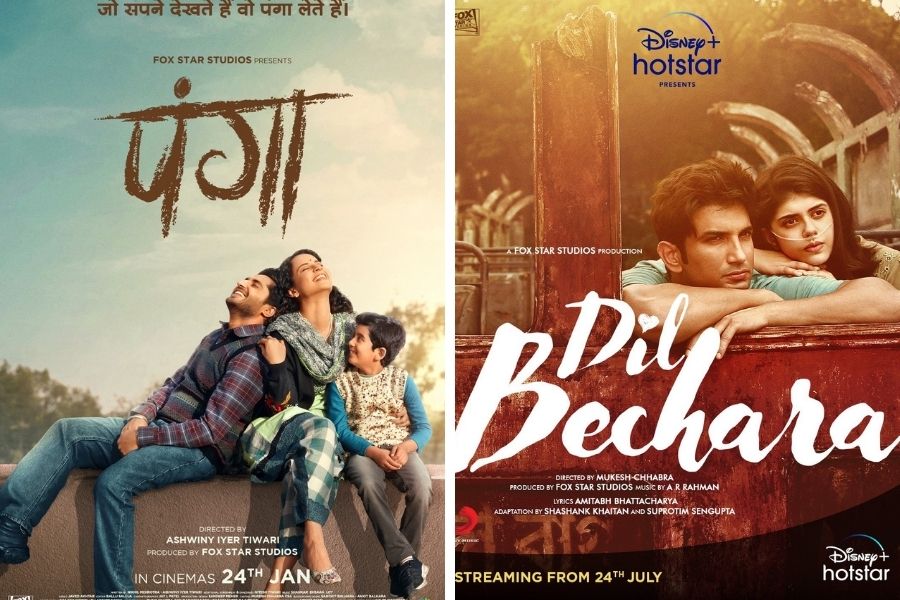 Kunal Purandare's picks: Dil Bechara: Riding On Emotions Dil Bechara could have been any other film in normal circumstances, but lead actor Sushant Singh Rajput’s untimely loss prior to its release made it an emotional watch for his admirers. The fact that the storyline mirrored reality made it even more overwhelming. The film is a poignant story of two cancer survivors who latch on to hope—and their friendship—despite the sufferings they have to endure. It’s a tale that speaks about living life to the fullest while accepting that adversity is an integral part of human life. Rajput infuses life into his performance, bringing to the fore the sensitivity that it demands. It’s tough to conceal a tear when he’s on screen, especially knowing that it’s his last act. It’s a pity that we lost a fine actor at such a young age. Panga: An ode to the dreams of mothers Mothers are all about spreading love and making sacrifices. They are often riddled with guilt, at times just for thinking about themselves, despite seamlessly fulfilling their responsibilities without a fuss. Which is why it’s refreshing to see a film like Panga—that celebrates the dreams and ambitions of a working mother—being made. Kangana Ranaut plays a former national-level kabaddi player whose life now revolves around issuing tickets at a railway counter and managing her family. Not that she isn’t happy, but the adrenaline rush that she experienced while leading and representing the country keeps playing in her mind. Marriage and motherhood had cut short a promising career. Egged on by her son, Ranaut attempts a comeback to the sport at the age of 32. Panga is about the many hurdles that a woman needs to overcome. Director Ashwiny Iyer Tiwari tells a tale of women empowerment with sport as the backdrop to highlight, among other things, issues like gender bias. It’s a feel-good film that will warm the cockles of your heart and make you tear up at times. An ode to mothers, it is a subtle reminder of their individuality and aspirations. Ranaut brings in the much-needed depth to convey the dilemmas and emotional upheavals of a mother who’s leaving her family behind as well as of a sportsperson returning to the big stage. Her nuanced performance elevates even some of the quieter moments in the film. A director’s actor, scenes such as the one where she turns her face and gently smiles at former teammate Richa Chadha with a glint in her eyes to convey she’s ready to take ‘panga’ with the world show she has internalised the character and is in complete control. Panga is a film that needed to be made and a story that had to be told. 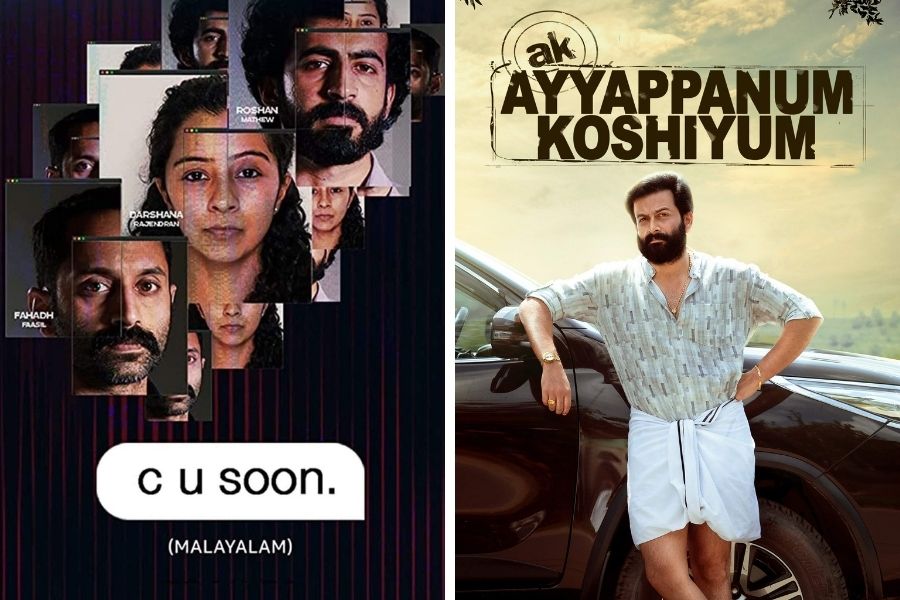 Manu Balachandran's picks: C U Soon: Shot entirely on an iPhone, this Malayalam thriller was gripping, with the lead characters interacting only through a computer and mobile phone screens. The movie was path breaking for Malayalam cinema, with natural performances and keeps you on the edge of the seat. Ayyappanum Koshiyum: Two of Malayalam cinemas biggest stars came together to give an intense performance, that isn't likely to fade from public memory anytime soon. Prithviraj as a former army officer and Biju Menon as a police officer end up in a tense confrontation, that forms the rest of the movie. Knockout performance that keeps you entirely engaged.

Tweets by @forbesindia
Indian Arbitration: Commencing our pursuit of the elusive triangle - Prateek Mishra
Forbes India 2020 Rewind: Best of 'From the Bookshelves' podcast