In remembrance of Himadri Sharma 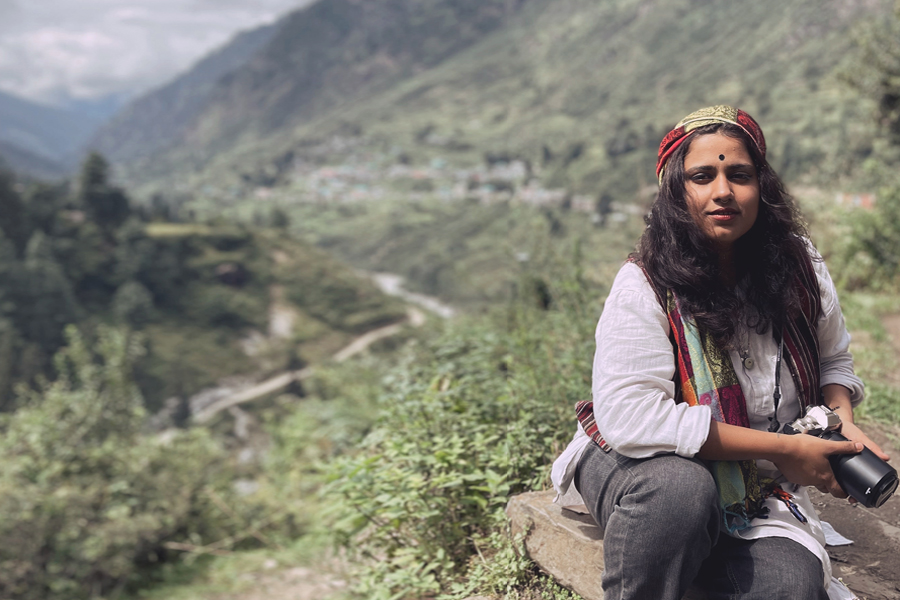 Himadri Sharma worked with Forbes India as a photography intern from April 2019 to July 2019.

It has been more than a month now. Being a mother, I could not write anything about her for so many days. I was out of words. On March 25, 2022, a star turned into ashes. My daughter, Himadri, lived her life at the fullest like a queen. She was many things, as she liked to describe herself.

She flew like a fairy while paragliding in Himachal Pradesh, and sang ‘zindagi ek safar hai suhana, yahan kal kya ho kisne jaana’, when she was up in the air. She swam like a mermaid in the complete dark at midnight in Gokarna’s seas. Though she was not professionally trained for the sea, she wanted to overcome her fear of darkness, and she took the risk—later describing how she felt inside the dark sea: She saw lakhs of stars like diamonds inside the water and loved the spark.
She loved the game of light as she was a photographer.
Read more: Himadri's photo feature on why 'every day should be mother's day'
Himadri loved adventures and challenges. Last year, she went to Himachal Pradesh during the lockdown, and hired a Scooty in a village, to cross the Atal Tunnel. There, she ran into some Indian Army jawans, who asked her quite surprised, if she had come all alone on an ordinary Scooty to go all the way to the Ladakh border! She crossed the tunnel and then shared the photo of her summit with me to get her back patted by me. Obviously she got it: as always...for all her achievements.

She laboured hard for all her paid and unpaid projects. She was a child prodigy with the IQ level of about 165 when she was in school. The counsellor who tested her asked me to change her school from Kendriya Vidyalaya, but she refused. She lived all her roles at the fullest, as if she had mastered all of them. Nobody could imagine that she will leave us so soon.

At the age of 23 it all ended… no, it cannot… because she called herself ‘Anhad’ (the name of her website)—which means beyond the boundaries of sound (naad) or space (brahm). The journey of ‘musafir’ will continue. Her work will keep her alive.
Read more: Himadri's photo feature giving a peek 'Inside the lives of the world's first Street Children Cricket World Cup champions'
At the age of 17, she had her first successful solo photography exhibition at Mumbai’s Jehangir Art Gallery. She did internships with many prestigious media publications such as Forbes India, The Indian Express, Outlook Traveller, and Bangalore Mirror, and gave them wonderful photo stories.

She wanted to become a doctor but due to some reasons that could not happen. Her ability to take challenges and get the best out of her failures led her towards creativity that was in her blood. I taught her the basic principles of any design form—rhythm, balance, and harmony. She absorbed them like a sponge. She was an excellent student, with curiosity in her fish-like eyes. Three years ago, she had said that she wanted to be many things, and I made her sit and write down everything she wants to become. She had 19 passions! And she had plans to fulfil them, she was full of life…

She always believed in inviting positive vibes in the most difficult challenges. She never discriminated between gender, caste, community, religion or faith. A turban on her head and a big bindi, with a septum ring in her nose, it never bothered her, how she’ll look in a short kurta, pyjama and a jhola on her shoulder. She loved all kinds of food from the roadside, at dhabas, and authentic food at home stays in Himachal’s remote villages, and Rishikesh, Varanasi, Prayagraj, Kolkata, Rajasthan, Kerala, Vrindavan, and her most favourite, Gokarna, and many more places.

The story got over “On The Road”—that was the title of her instant photography show. On August 16, 2021, she decided to have a show titled, “On The Road”, and instantly initiated it. Within a few hours, the poster was ready. The nylon strings and clips to hang photographs were ready. She took out a few selected photo prints and hung them with the help of clips to the string that was tied from a small coffee shop to one of the trees. Her plan not only included showcasing her photography, but also included friends who played the violin and the guitar, and sang songs and gazals. She was a mentor for many. She had friends of all age groups. Everyone who joined the show, were mesmerised with the magical vibes of Himadri.

Being a science student, she called her floor a ‘lab’, and never a studio. Her lab was the place where her fountains of ideas and experiments were born each night. She worked throughout nights and days. In the last five years, she hardly slept at night. Her lifespan of 23 years was equal to a 100-year journey.

Immediately after her birth, the Kargil war had started and, her father, who was in the Indian Air Force, was in the bunkers for day and night. She was my little fairy, and the only lovable hope of my life. I loved her before even she was born.

Himadri was a premature baby, born in a pool of blood in her eighth month due to the broken placenta. She passed away at the age of 23, in a pool of blood due to 19 major death-causing injuries. A truck hit her from behind, right outside the Jalahalli metro station in Bengaluru, on the service road. She was taking her brand new electric Scooty for servicing for the first time. The heavy-vehicle, loaded with cement, did not stop. He smashed into her and dragged her till the next pillar. Her head was saved due to the helmet, but the truck had gone over the rest of her.

And, within about fifteen minutes, my daughter was killed in broad daylight at about 2:45 to 3:00 pm. Someone called the 108 number for an ambulance but till then, the story of my super star was over “on the road”.

Nobody took her to the hospital for immediate first aid. The busy Jalhalli cross circle always has 10-15 traffic cops. She had ID cards in her wallet, but I got a call only at around 3:37 pm. The police called me to the police station first instead of telling me where her body was taken. The disaster happened due to the ultimate negligence of the traffic police over there. Almost every day, accidents happen in the same area because the two pillars of the flyover are damaged, and the authorities allow heavy vehicles to go through the service road where none of the CCTV cameras are operational. So there is no evidence or footage of the heavy vehicles. Police allow the heavy vehicles and the government’s BMTC buses to go exactly outside the metro station.

It’s a national loss due to the negligence of the traffic police.

I can call it a national loss for many reasons. Himadri’s book—“Of Seeing, Of Seeking, Of Being”—that she has authored and is also the photographer, is in the process of publishing. She has written it very beautifully, and blended her creative writing, spiritualism, and photography for it. Her unique way of thinking about photography and a journey of a photographer are so heart-touching. It will be available on Amazon and Flipkart very soon.

She completed her Bachelors from St. Josephs of Bangalore. After graduating, she was offered a $22,000 fellowship in the new media photojournalism program at the George Washington University in the US. She also got an offer letter to join the University of Westminster, UK, for the documentary photography and photojournalism master’s degree program. She was also selected for the SPAO residency in Canada. But she decided not to leave her country, and did an online master’s program in documentary photography and photojournalism that she was already practicing practically.

She decided to instead wander in the country and work on various documentary projects. She loved to study and research human life, various cultures, their rituals, faiths, and food they eat. Many social issues provoked her sensitive mind to make photo documentaries. She was of a unique mind who thought from a different perspective. She could see things from different angles through her lens and that reflects in all her images. Nobody can ever think of connecting the supreme power through the lens.
Read more: Himadri's photo feature on 'What drives Mumbai's young voters'

My little angel lived a life full of challenges, love, betrayals, and everything that a person experiences in a 100-year life. She lived everything with a positive approach and laughed out loud at everything that tried to break her.