Insurer's grey market premium down; future initial public offering listings might slow down due to volatility 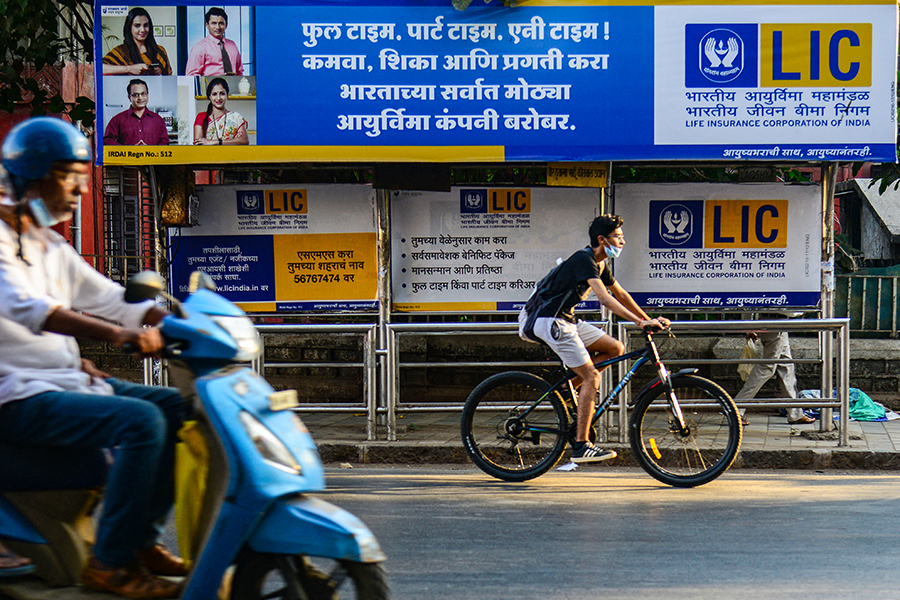 The initial public offering (IPO) from the state insurance giant Life Insurance Corporation of India (LIC) – the largest such offering ever in India – closed strong, with the issue being oversubscribed 2.95 times on Monday, with bids for 47.83 crore shares, against an IPO size of 16.2 crore shares.Institutional support to the issue came in strong with bids for 11.2 crore shares, indicating a 2.83 times oversubscription for this portion. The policyholders’ portion of the book has been oversubscribed 6.12 times, employee reserve portion was oversubscribed 4.4 times and the retail investors portion 1.99 times.This IPO performance comes in a week when key market indices fell around 2.15 percent to 54,470.69 points. Equities in India have slid 7.6 percent in the past four weeks, after the Reserve Bank of India surprised investors with an out-of-cycle monetary policy 40 basis points repo rate hike, in a move to curb inflation.   Analysts speaking to Forbes India called the response positive. Pranav Haldea, managing director of Prime Database, says, "A three times oversubscription for an issue of this size and in this type of market is quite commendable. The government has to be congratulated for persevering and ensuring that the IPO is launched rather than putting it in cold storage and also for not looking to maximize the value at the time of IPO."As per the revised issue size, the government is selling 3.5 percent of its stake in LIC through the offer-for-sale (OFS). The price band of the near Rs21,000 crore issue has been fixed at Rs 902 to Rs 949.Despite the sound performance, the grey market premium for LIC continues to slide. LIC's shares are quoting at Rs50 premium per share in the unlisted territory, which had improved intraday Monday, but was still down from Rs 60 levels over the weekend.Independent market expert Ambareesh Baliga expects the markets to remain weak for at least two quarters due to the impact of rising inflation, and with more rate hikes feared in coming quarters. “But it could be a great time to keep your ammunition ready,” Baliga says, talking about a fresh time to invest.The government had decided to delay the launch of the LIC IPO, planned earlier in Feb-March. The concerns surrounding higher inflation, rise in input costs for several corporates and the Russia-Ukraine war, all started to hurt global and local equity markets. This had forced the government to do a rethink on LIC’s valuation and the issue price.

LIC had a market share of 61.6 percent in terms of premiums, 61.4 percent in terms of new business premium (NBP) and 71.8 percent in terms of number of individual policies issued, for the nine months ended December 31, 2021.LIC is the fifth-largest player globally in terms of the life insurance premium and 10th largest in terms of total assets. In 9MFY22, LIC’s new business premium (NBP) market share was 61.4 percent, around 1.6x the total private life insurance sector and 6.7x the NBP for the second-largest player in the Indian life insurance industry.The LIC IPO kicked off on May 4 during a crucial period, with inflation still high, foreign funds sellers in emerging markets and the sustained impact of the Russia-Ukraine war.With volatility increasing, Haldea forecasts a slowdown in upcoming fund raising activity. "We might see a bit of pause in new listings, given this latest spate of volatility. It might have created a bit of a dampener in corporate sentiment …as the foreign funds outlook and global markets are also weak,” he says.Around 45 offerings have got approval from the Securities and Exchange Board of India (Sebi) and are ready to launch anytime.

Tweets by @forbesindia
In remembrance of Himadri Sharma
Apple's ML specialist quits over return-to-office policy; Uber to cut back hiring and spending; Bitcoin crashes to a 10-month low