India’s slowing economy got a lift when the government decided to ease rules for foreign investments in September. The reforms perked up the Mumbai Sensex by 10% over the past 12 months, enabling the country’s 100 richest to realize modest gains. Their collective net worth is up 3.7% to $250 billion compared to $241 billion a year ago. But according to this year’s Forbes India rich list, those gains were uneven as seven lost more than a billion and six gained at least that. The complete list will be available in the upcoming edition of Forbes India, available from 2nd November 2012.

​​For the fifth year in a row, Mukesh Ambani retains the top spot with a net worth of $21 billion, despite his fortune falling for third year in a row. His company Reliance Industries remains India’s most valuable company. Lakshmi Mittal holds on at No.2 with $16 billion, down $3.2 billion since last year as shares of his ArcelorMittal, the world’s largest steelmaker, were under pressure due to rising costs and slumping demand in Europe. Azim Premji founder of outsourcing company, Wipro, is ranked No. 3 on the list with a net worth of $12.2 billion, lower by $800 million from a year ago. 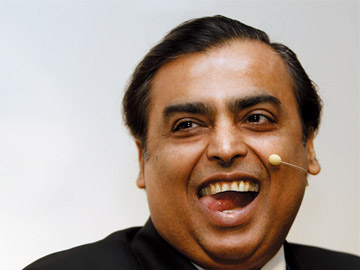 Image: B Mathur / Reuters
​The biggest dollar gainer was pharma tycoon Dilip Shanghvi, who broke into the top 5 for the first time with a $2.5 billion jump, as shares of his Sun Pharmaceutical soared. His net worth is $9.2 billion. Fellow pharma entrepreneur, Wockhardt’s Habil Khorakiwala, who rejoined the billionaires ranks, was the year’s biggest percentage gainer with a net worth of $1.8 billion.

​There are now 61 billionaires in all, four more than last year. Among them are the Hinduja brothers who debut with an estimated $8 billion fortune. While 3 of the siblings are not Indian citizens, their expanding business ties to India made them candidates this year. They are also the richest of the 11 newcomers to the list. The youngest newcomer is 40-year-old Ranjan Pai (No. 63), credited with turning his Manipal Group into a global brand in education, who enters the list with $975 million.

​The minimum net worth to make the list increased from $370 million last year to $460 million this year.

The top ten richest in India are:
1) Mukesh Ambani; US$21 billion
Mukesh Ambani is the richest Indian for the fifth consecutive year; his net worth is $21 billion and he derives most of his wealth from oil & gas. Though his fortune dropped by $1.6 billion in the past year, his Reliance Industries remains India’s most valuable company by market cap.

2) Lakshmi Mittal; $16 billion
Steel baron Lakshmi Mittal is second on the list with a net worth of $16 billion. His fortune dropped more than $3 billion in the past year, and $10 billion in two years as shares of his ArcelorMittal, the world's largest steelmaker, tanked due to surging costs and slumping demand in Europe.

3) Azim Premji; $12.2 billion
Though shares of his Wipro remained virtually flat in what is seen as a difficult market for outsourcing firms, Azim Premji’s net worth rose to $12.2 billion, making him the third richest on the list. Asia's most generous person, Premji donated $2 billion from his personal wealth in 2010 to his foundation.

4) Pallonji Mistry; $9.8 billion
Patriarch of construction giant Shapoorji Pallonji Group, Pallonji Mistry is the fourth richest with a net worth of $9.8 billion. His family's fortune is up $2.2 billion this year, after it disclosed new information on their privately held group. Mistry's family is the biggest shareholder in Tata Sons; his younger son Cyrus has been appointed Ratan Tata’s successor.

5) Dilip Shanghvi; $9.2 billion
Dilip Shanghvi enters the top five for the first time as shares of his Sun Pharmaceutical, which he founded in 1982, gained 48 percent in 12 months, hitting a record high in October. It is the country's most valuable drug maker with a market cap of $14 billion. Shanghvi’s net worth is $9.2 billion.

6) Adi Godrej; $9 billion
Third generation to head the 115-year-old Godrej Group, a $3.8 billion (revenues) consumer goods conglomerate, Adi Godrej is the sixth in the list with a net worth of $9 billion. His family's fortune is up due to rising value of their biggest asset, a 3,500 acre estate in suburban Mumbai.

7) Savitri Jindal; $8.2 billion
It’s been a tough year for the OP Jindal Group, steel and power conglomerate founded by her late husband, which Savitri Jindal chairs. Her family's fortune fell $1.3 billion in the past year and is down $6.2 billion in two years. She is seventh on the list and her net worth is down to $8.2 billion.

8) Shashi & Ravi Ruia; $8.1 billion
Brothers Shashi and Ravi Ruia have a combined net worth of $8.1 billion. Their Essar Group is a $27 billion (revenues) conglomerate with operations in 25 countries. Their fortune declined this year as shares of its London-listed Essar Energy more than halved; the group’s $12 billion debt is a concern too.

9) Hinduja Brothers; $8 billion
The Hinduja brothers [Srichand (L), Gopichand (C) and Prakash (R) and Ashok] make their debut this year riding on a renewed focus on Indian operations. Their net worth is $8 billion.  Their flagship Ashok Leyland has a 25 percent share of the commercial vehicles market in India. Internationally, the group is beefing up its automotive, oil and wealth management operations.

10) Kumar Manglam Birla; $7.8 billion
At 45, Kumar Mangalam Birla is the youngest of the top ten billionaires. His net worth is $7.8 billion and his $40 billion (revenues) Aditya Birla Group is racing ahead to meet the target of $65 billion turnover by 2015. In the past one year, he has been busy deal making across businesses from retail to mining and media.

The Forbes India rich list special edition will hit stands on 2nd November. Indrajit Gupta, Editor, Forbes (India) said, "This edition of the Forbes India Rich List comes at an extraordinary moment in India’s history. We need a new burst of entrepreneurial energy, creativity and innovation to lift our economy out of its self induced stupor. Else, we could simply lose our way. In this collectors issue of Forbes India magazine we do not just list who's gained and how much, but present lessons from stalwarts like Harsh Mariwala and Kishore Biyani who've been there and done it all;  and accounts of whom to watch out for like Nisa Godrej and Satyan Gajwani."

This list was compiled using shareholding and financial information obtained from the families and individuals, stock exchanges, analysts and India’s regulatory agencies. The ranking lists family fortunes, including those shared among extended families. Public fortunes were calculated based on stock prices and exchange rates as of Oct. 12. Private companies were valued based on similar companies that are publicly traded.Slideshow: The Top 10 Richest Indians