As Israa Seblani posed for her wedding video, an explosion tore through the city, devastating much of central Beirut and blowing windows from their frames for miles 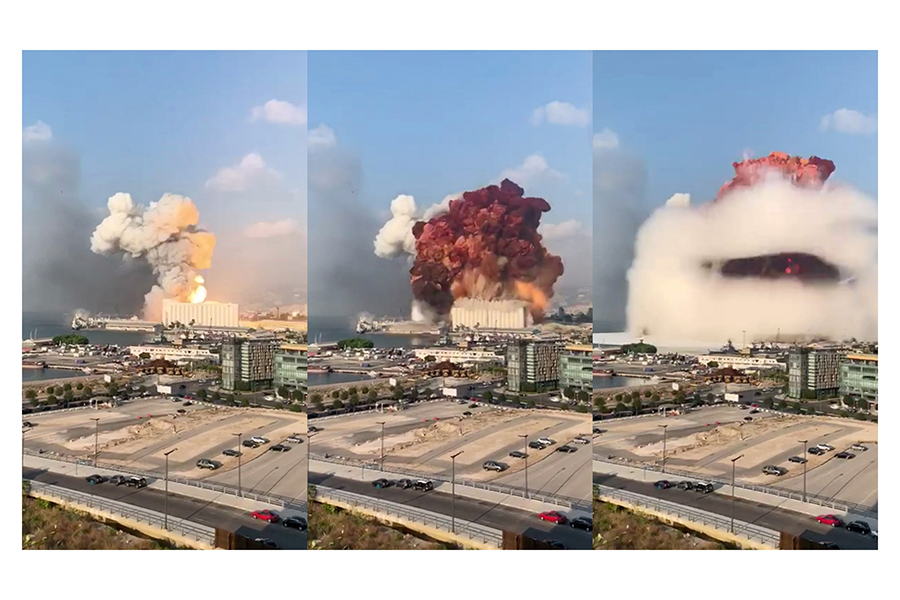 Israa Seblani’s long white veil trailed behind her. She gazed downward as the camera captured her smile and panned to her train, draped around her feet in a lacy circle. She was just hours away from her wedding ceremony. Then came a deafening boom that knocked her to the ground and shattered the day in an instant. As Seblani, 29, posed for her wedding video, an explosion tore through the city — leaving more than 145 dead, thousands injured and dozens more missing — devastating much of central Beirut and blowing windows from their frames for miles. “One thing came into my mind: Now you are going to die,” Seblani said. The camera captured the instant that the massive blast rattled the Saifi neighborhood, less than 1 mile from the epicenter, and the panicked moments that followed as Seblani and the groom, Ahmad Sbeih, scrambled for safety. The video of Seblani being thrown to the ground by the blast quickly made its way around the world, a lasting image of a normal Tuesday evening that turned into a disaster. The day had been nearly perfect. Three weeks earlier, Seblani had flown in from the United States, where she is completing a residency in endocrinology at a hospital in Detroit, for the wedding, and the only thing on her mind was starting her new life with her husband. “At the moment I was taking that picture, life was so normal,” she said, describing the square near downtown Beirut, which was bustling with people dining in restaurants and shopping. “And in just a matter of seconds, the sky turned from blue to pink, and there was heavy smoke in the sky.” What the couple didn’t know was that a fire was raging at a warehouse in Beirut’s port, where 2,750 tons of ammonium nitrate, an explosive chemical often used as fertilizer, was being stored. Soon the smoke turned into what Seblani described as “a catastrophic explosion” that threw her to the ground. “It just took a second from hearing the explosion to being hit by it,” she said. “The beautiful place that I was in, it turned into a ghost town.” When she got to her feet, the square was filled with shattered glass and people covered in blood, crying out for help. Seblani said that in the moment, she thought the area was under attack and she and her husband would be killed. “Everything you planned for is now flying away with the dust and the shattered glass, and in a few seconds you will die,” she said. Sbeih, who had been watching from a short distance away as Seblani was filmed, remembered hearing a small explosion and asking those around him, “Did you hear that?” “And the photographer told me, ‘It’s Lebanon, you know. It’s OK. Nevermind,’” he said. “And after that I heard an explosion like I’d never heard in my whole life.” He was also thrown in the air by the pressure and landed about 6 feet away. His first thought when he got to his feet was to find his bride and run. The pair took shelter in a nearby restaurant. The cameraman, Mahmoud Nakib, captured the scenes as the couple rushed away from the open square down a side street. Smoke filled the sky as the bride and groom carefully picked their way through broken glass and overturned tables. After composing themselves, Seblani and Sbeih drove to their home in the city and realized they had a choice to make: whether to go ahead with the wedding. The couple had already postponed their wedding for three years, waiting for a visa that would allow Sbeih to join Seblani in the United States, where they originally planned to get married. “We thought it was going to be our year, but that didn’t work out,” Seblani said with a laugh. As they returned home Tuesday, shaken from the magnitude of the explosion and its effect on the city they both call home, they decided they had been waiting long enough. They held a ceremony and celebration at home, surrounded by family. Now they must make the difficult decision about what comes next. Seblani wants to return to the United States and continue her residency, but now more than ever she worries about leaving her husband behind in Lebanon, where she fears the instability, the lack of resources and the growing anger over the port explosions will only make things worse. “Life in Lebanon is getting complicated more and more,” she said, citing the economic crisis and lack of safety. “But we need to be together. We’ve been apart for three years, and that’s enough.” On Wednesday, a day after the blast, the couple returned to the square. Seblani wanted to go back, she said, because it still didn’t feel real. “Once I put my feet there, I felt every single thing,” she said. “I think each time I go to that street, I’ll remember that moment.” Despite the traumatic start to their married life, she knows that she and her husband are among the lucky ones, but she is finding it hard to find joy in being a newlywed. “There are families who lost their children, children who lost their parents, so how can we be happy?” she said. “All we can say is, thank God for everything.”

Tweets by @forbesindia
Mumbai put female figures on traffic signals. Some women are not impressed
Class of 2020 navigating jobs through the pandemic