Abe, 65, has been prime minister for nearly eight years, a significant feat in a country accustomed to high turnover in the top job. Japanese stocks fell as much as 2% Friday afternoon following the report of Abe's planned resignation 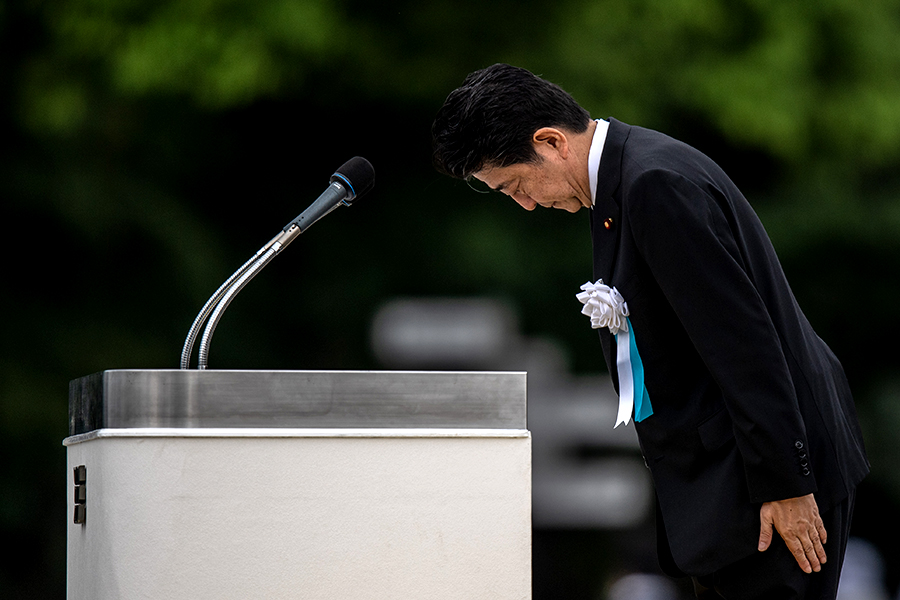 Japanese Prime Minister, Shinzo Abe, bows after making a speech during the 75th anniversary of the Hiroshima atomic bombing, on August 6, 2020 in Hiroshima, Japan. In a ceremony that has been scaled back significantly because of Covid-19 coronavirus, Japan will mark the 75th anniversary of the first atomic bomb that was dropped by the United States on Hiroshima on August 6, 1945. The bomb instantly killed an estimated 70,000 people and thousands more in coming years from radiation effects. Three days later the United States dropped a second atomic bomb on Nagasaki which ended World War II. (Photo by Carl Court/Getty Images)

TOKYO — Prime Minister Shinzo Abe of Japan will resign because of ill health, the country’s national broadcaster, NHK, reported Friday, just four days after he exceeded the record for the longest consecutive run as leader in Japanese history.

Abe, 65, has been prime minister for nearly eight years, a significant feat in a country accustomed to high turnover in the top job. During his tenure, he oversaw Japan’s recovery from a devastating earthquake, tsunami and nuclear disaster, restored a semblance of economic health and curried favor with an unpredictable American president, Donald Trump.

Yet despite his long hold on power — his second stint as prime minister — Abe failed to reach some of his signature goals. He was unable to revise the pacifist constitution installed by postwar American occupiers or to secure the return of contested islands claimed by both Japan and Russia so that the two countries could sign a peace treaty to officially end World War II.

The governing Liberal Democratic Party is expected to appoint an interim leader who will serve until the party can hold a leadership election. Abe’s term was set to expire in September 2021.

Japanese stocks fell as much as 2% Friday afternoon following the report of Abe’s planned resignation.

The Japanese news media had been speculating about Abe’s health for weeks, particularly after he significantly dialed back public appearances as a new wave of coronavirus infections erupted in clusters throughout the country. When Abe visited a hospital twice in the span of a week, the rumor mill went into overdrive.

Earlier Friday, Yoshihide Suga, Abe’s chief Cabinet secretary, had reassured reporters that Abe intended to stay in office. “The prime minister himself has said he would like to work hard again from now on, and I’m seeing him every day,” Suga said in a news briefing, saying that the prime minister’s health “remains unchanged.”

Abe, the grandson of a prime minister accused of war crimes and the son of a former foreign minister, began his first, yearlong stint as prime minister in 2006. As he resigned in 2007 under a cloud of scandal, he cited the debilitating effects of ulcerative colitis, a bowel disease.

It was unclear whether Abe was suffering again from the effects of that disease or had contracted another ailment.

During his second period in office, which began in late 2012, Abe survived a few influence-peddling scandals and rode out numerous elections. In 2015, he pushed through contentious security legislation that permitted Japanese troops to engage in overseas combat missions alongside allied forces, as part of “collective self-defense.”

His political power peaked in 2017 when his party won a landslide victory that gave it, along with its coalition partners, two-thirds of the seats in Parliament. That was the supermajority required to push through a constitutional revision, but Abe never brought that dream to fruition, with public opposition to such a change remaining high.

Abe, who was in office when Tokyo won its bid to host the 2020 Summer Olympics, will step down before he can preside over the Games, which were postponed to 2021 because of the pandemic.

By the time he signaled his intention to resign, Abe was a hugely unpopular leader whose disapproval ratings had risen to their highest level since he began his second term.

The public has been dissatisfied with his administration’s handling of the coronavirus, particularly its effects on the economy, which erased what achievements he could claim under his economic platform, known as “Abenomics.”

Under that program, Abe had administered a three-pronged plan of monetary easing, fiscal stimulation and corporate reform. Most of its promises of corporate reform — including efforts to empower women, reduce the influence of nepotism and change entrenched work culture — remained unfulfilled.

Tweets by @forbesindia
Even amid the Covid-19 pandemic, top hospitals are losing crores
German automotive giant admits it was a Nazi accomplice