Even amid the Covid-19 pandemic, top hospitals are losing crores

With patients staying away due to the panic created around contracting the coronavirus, top hospitals are losing big money from postponement of elective surgeries and check-ups 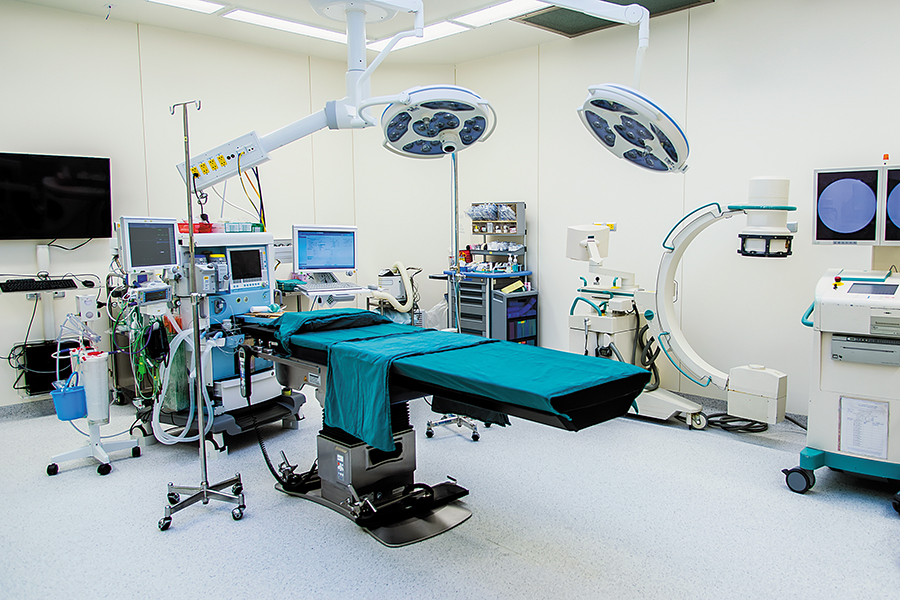 (Left) Operating rooms sport a vacant look as people postpone elective surgeries fearing an infection in hospitals, which continue to see a rush of patients for Covid care
Image: Shutterstock


Hospital bills running into lakhs for Covid-19 treatment have often made headlines over the last few months, leading to a public perception that health care companies are minting money out of a crisis. But the latest quarter results of a number of top hospitals indicate otherwise.

Most of the top listed health care companies have ended up in red for the April-June quarter: While Apollo Hospitals, the largest by market capitalisation, is yet to report its results, the others on top—Fortis Healthcare, Narayana Health and Aster DM Healthcare—reported losses. In some cases, revenues from operations and profits had started falling or were flat during the end of March quarter too.

Take Fortis Healthcare Ltd (FHL) and its listed subsidiary Fortis Malar Hospitals Ltd; both reported losses for the quarter. FHL’s consolidated revenue from operations stood at ₹606 crore during the June-ended quarter as compared to ₹1,138 crore during the corresponding period last year, a drop of 47 percent. It recorded losses of ₹188 crore against a profit of ₹78 crore for the same period last year, while its hospital occupancy during the quarter was at 37 percent as against 66 percent in FY20.

Fortis’s average revenue per occupied bed (ARPOB), a metric hospitals closely look at, stood at ₹1.51 crore during the quarter as against ₹1.58 crore during the same period last year, which means patients are paying less than before.  Fortis Malar’s revenues dropped by 70 percent on a year-on-year basis and stood at ₹9.43 crore. 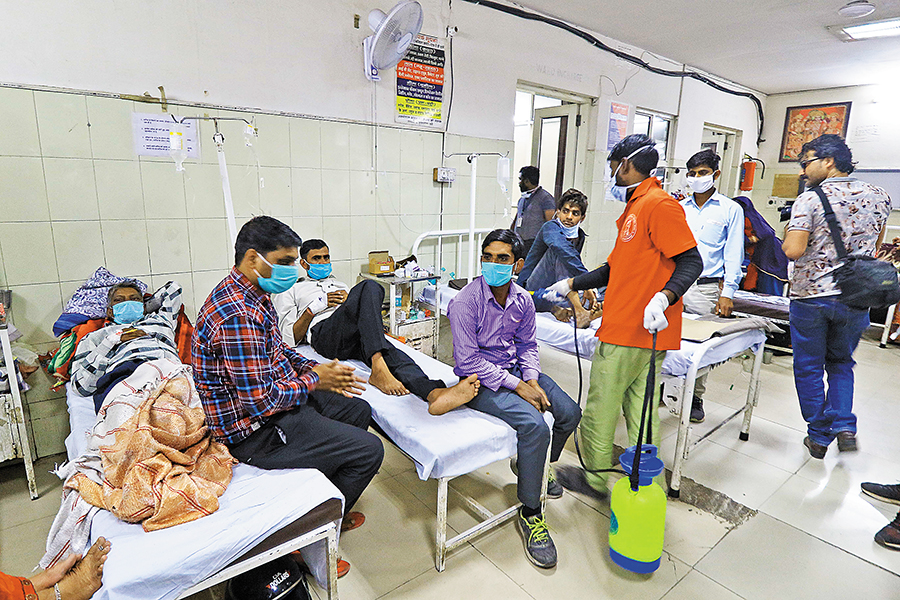 The company did not respond to a detailed questionnaire sent on August 14. Its management has indicated during its results that most patients are still choosing to postpone elective surgeries. “This is reflected in the hospital occupancy which witnessed a buoyant rise from 29 percent in April 2020, to 47 percent in June and stood at 51 percent for the month of July. Initial occupancy trends in August are similar to July,” it said. This means while numbers are going up slowly, they are not back to old levels, indicating that people are still postponing surgeries.

“Most of the large hospitals have lost nearly ₹100 crore and we are witnessing consistent reduction in topline by 50 percent,” says Dr Ranjan Pai, chairman of the Manipal Education and Medical Group, which owns the large unlisted chain of Manipal Hospitals. Besides, the company had to book hotels and quarantine homes for 300-400 staff members who were infected while working during the pandemic; denting reserves further.

In a normal scenario, the bread and butter for any hospital is elective surgeries, especially cardiac, orthopedic, neuro and spine, and cancer surgeries, among other specialised treatments. “Covid care is not part of our regular business. There are no hospitals dedicated for infectious diseases in the country anymore. In fact, we haven’t had hospitals dedicated to infectious disease since probably the 1950s, when tuberculosis was the most infectious lung disease. Hospitals make money doing surgeries, managing patients with chronic conditions and elective procedures,” says Viren Shetty, executive director and group chief operating officer at Narayana Hrudayalaya Ltd (NH),  the third largest health care firm by market capitalisation. 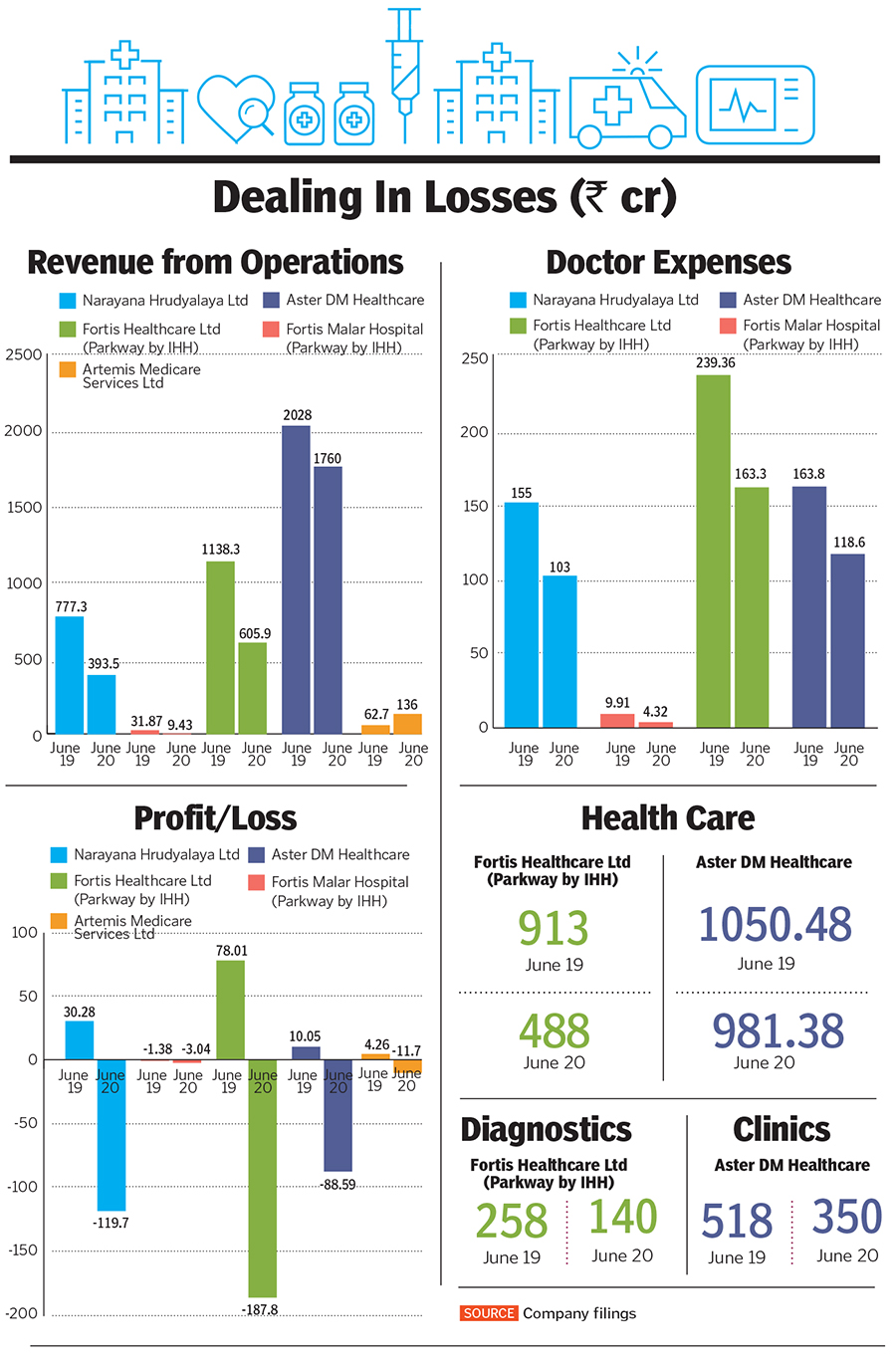 For the quarter, NH reported a loss of ₹119 crore as against a profit of ₹31 crore last year. Its income from operations for the June quarter stood at ₹394 crore as against ₹777 crore for the corresponding period last year, a drop of nearly 49 percent.

While the company’s share price moved from ₹281 apiece on July 20 to ₹347.75 on August 18, Shetty talks about the early days of combating Covid-19. “It was insidious, because we didn’t understand how it spread. Only later on, once we got more data, we understood that eight percent of all Covid deaths are of doctors because they’re in an environment of very high viral load.”

To protect its frontline health care personnel, the hospitals had to stock up on personal protective equipment (PPE), N95 masks and other necessities like sanitisers, adding up to their expenses. Manipal Hospitals has spent around ₹1.6 crore-2 crore per month to acquire these. The cost is similar for other hospitals too. “The reason why the numbers look so bad for all hospitals, ours included, was because of all these costs we had to incur. On top of that, you really can’t charge that much for Covid treatment because there’s very little you can do,” Shetty says.

While some hospitals tried to pass on these costs to patients, it earned them public and government wrath. “Now I think the predominant sentiment is to just accept the loss. And wait for the pandemic to get over so we can go back to normal operations,” adds Shetty.

Not just hospitals, doctors, too, have lost their incomes due to the pandemic. A look at doctor expenses by these listed hospitals show payout to doctors have dropped anywhere between 27 percent to 56 percent. For NH, for instance, doctor expenses have fallen by 33.54 percent, from ₹155 crore to ₹103 crore.

A large share of a doctor’s salary is paid as a percentage of the procedures they perform. Even on the fixed portion front, what is called the minimum guarantee, there have been salary cuts in many hospitals. As hospitals have shifted many of their services to telemedicine, they’ve been unable to charge the full OPD fees as earlier. Some hospitals are now trying to tie in various packages, which include future hospital visits, to keep their revenues going.

Another case in point is Artemis Medicare Services, a health care venture owned by the promoters of Apollo Tyres, which specialises in elective surgeries. The listed company launched in 2007 has reported an income of ₹62 crore for the quarter ending June as compared to ₹136 crore, a 120 percent drop compared to last year. It posted a loss of ₹11.55 crore for this quarter compared to a profit of ₹4.41 crore last year.

Vikram Vuppula, founder and chief executive officer of NephroPlus, one of India’s large dialysis service providers, says that while they have been able to recover a part of the 15 percent revenue dip they saw towards the early part of the pandemic, they are facing a bigger problem with the hit in reimbursement cycles. “Previously we used to get money [dialysis fees] on time but now reimbursements are taking longer. They form our working capital. Costs have increased too—if 20 percent of our staff goes into quarantine due to infection, we need to hire replacements.”

While dialysis is an essential service, NephroPlus has now started Dialysis On Wheels where patients are treated inside an ambulance near their house and has also started setting up home dialysis. The company has recently won a private public partnership (PPP) project from the Bihar government to open 19 centres in next three to six months, but is facing cost escalations in some of its existing contracts due to increase in prices for Heparin [needed for dialysis].

“The revenue fall for the June quarter has been sharp. It will be a washout quarter because of the lockdown measures. But we are expecting a gradual recovery.  Majority of them have shown Ebitda losses but occupancies are slowly picking up,” says Kapil Banga, assistant vice president at ratings agency ICRA.

In its report in May, ICRA said it believes revenues of entities in the health care sector will fall by 15-20 percent in FY21. Banga is sticking to his guidance. The monthly revenue run rate is expected to reach pre-Covid levels in second half of FY21 subject to the return to normalcy and revival of medical tourism. However, the performance in the second half of the fiscal will not be adequate to make up for the losses in the first half, leading to a full-year drop of 15-20 percent.

In order to cope with 65-75 percent fixed costs, the hospitals have started passing on the increased costs to patients and have also implemented cost-cutting initiatives like salary cuts, rent waivers, negotiations with vendors to cushion the impact on profitability and cash flows.

One segment which has witnessed complete stagnation is medical tourism which, according to Banga, makes up for 10-12 percent of the revenue. Hospitals are now trying newer ways to get back these patients. Shobhana Kamineni, executive vice chairperson at Apollo Hospitals says one experiment they are doing in Africa is to bring in patients via chartered flights.

“We would be able to test them in their country and then bring them here for treatment. You’ll have to find unusual ways. But that business is going to definitely take quite a bit of time before it comes back to its old levels,” she says.

As patients stay away from health care facilities in fear of picking up Covid, hospitals believe it is building up to a larger problem in days and months to come. “Once this is over, there’ll be a deluge of people who have delayed treatment. They’ve not been getting breast exams, prostate exams, head and neck exams, not even coming for their cardiology checkups. All those patients are going to suffer,” says Shetty of NH.

Manipal’s Pai laments that patients think hospitals are den of deaths, but hopes they will slowly start coming back. “We had the biggest impact during the lockdown but the volume has come back to 60-65 percent and improving week on week. The fear will go out gradually and by the last quarter of this year we should be getting back to 70-80 percent occupancies.”
Aster DM Healthcare, which runs hospitals in the Middle East (GCC) and India, has seen its revenues drop by 13 percent this quarter. Dr Azad Moopen, founder chairman and managing director at Aster DM, thinks that cases in India are still peaking and the situation is unpredictable for next 2-3 months.

About 81 percent of its business comes from the GCC region and the remaining 19 percent from India, which makes business recovery a little easier than its pure play Indian counterparts.

“We are two months into the quarter and numbers are getting stabilised and we are at the level where we were last financial year,” Moopen says.

Aster DM’s hospitals in the UAE are now Covid-free. Also, July- August are usually holiday months where people travel outside the GCC region. With travel restrictions in place, the hospital is expecting that people will come in for treatments rather than wait to go home and get themselves treated for elective procedures. In India, it has seen more impact in its hospital in Maharashtra, but Moopen is hoping that operations in Kerala will stabilise by the end of this quarter. Taking its telemedicine services a step ahead, Aster DM is also conducting tele-ICU services.

Hospital chains are now rewiring themselves to find new flywheels for their businesses.

Moopen says, “The first major focus is to increase the digital transformation of our business especially telemedicine. Next is to move into some sort of shared service model where we can reduce our HR costs.”