German automotive giant admits it was a Nazi accomplice

During the war, when Continental supplied tires for military aircraft and vehicles, the company used concentration camp inmates to test products, and the inmates often died as a result, reports say 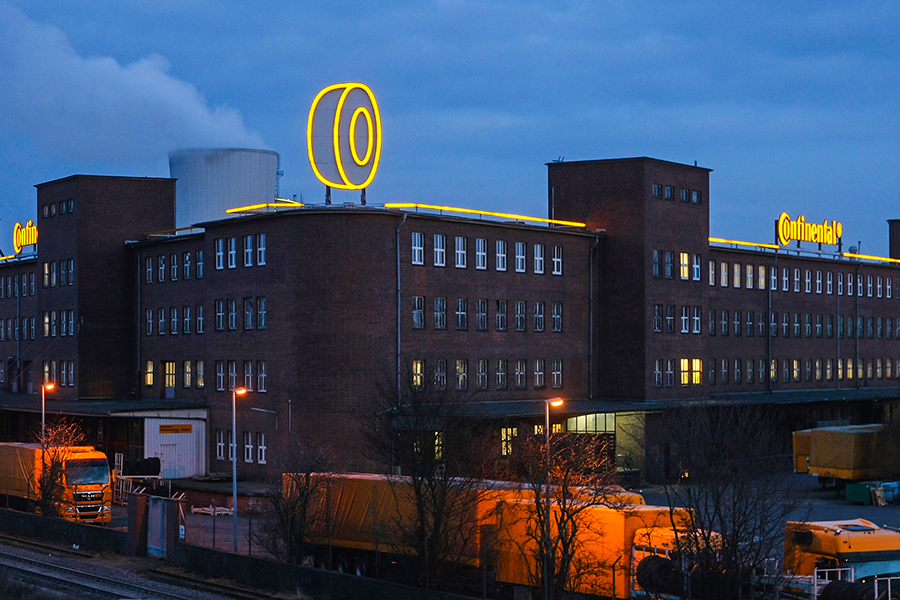 HANOVER, GERMANY -Twilight descends on the production plant of German automobile tire manufacturer Continental on March 3, 2009 in Hanover, Germany. Continental has been plagued with financial problems for years that have only been aggravated by the recent global financial crisis.  (Photo by Sean Gallup/Getty Images)

FRANKFURT, Germany — Auto parts maker Continental became the latest German company to issue a confessional study of its Nazi past Thursday, saying it was “a pillar of the National Socialist armaments and war economy” that employed around 10,000 slave laborers, often in inhumane conditions.

During the war, when Continental supplied tires for military aircraft and vehicles, the company used concentration camp inmates to test products, and the inmates often died as a result, according to the study by Paul Erker, a historian at Ludwig Maximilian University in Munich commissioned by Continental to examine its past.

Yet after the war, top managers of the company managed to escape punishment and pursue successful careers, according to Erker, who spent four years doing research for an 800-page book on Continental’s wartime history. The study also looked at firms that Continental acquired after the war, like VDO, a maker of auto electronics that supplied guidance systems for V-1 rockets fired at Britain by Germany during World War II.

Such studies have become obligatory for German companies, which often used slave laborers, profited from the Nazi regime and took part in the persecution of European Jews. But Continental, a member of the benchmark DAX index with 230,000 employees worldwide, is far behind other blue-chip companies like Volkswagen or Deutsche Bank that laid bare their wartime pasts decades ago.

Elmar Degenhart, chief executive of Continental since 2009, said the study was “overdue” but could not explain why it had taken so long.

“We can’t speak for earlier generations of management and don’t want to make any accusations against them,” Degenhart said during a news conference Thursday.

Many prominent German companies have still not underwritten detailed studies of their behavior under Naziism. Erker lists some of them in a footnote in his book: electronics giant Siemens; detergent maker Henkel; and chemical and pharmaceuticals maker Bayer, which during the war was a part of the notorious IG Farben conglomerate. IG Farben built a synthetic rubber factory that depended on slave labor from nearby Auschwitz and produced the gas used to kill concentration camp inmates.

Source: Continental AG YouTube
Ariane Reinhart, chief of human relations at Continental, said the study by Erker, which drew on company archives not previously available to researchers, contained lessons relevant for business today. She was struck, she said, by how easily the Nazis co-opted Continental’s managers.

“It shows me how fragile company cultures are,” Reinhart said. “In the 1920s, Continental was an open, international, liberal company. Within a few years, the Nazi system was able to smother all of these qualities.”

Although best known for tires, Continental, based in Hanover, also makes a wide array of automobile components like electronic sensors and brakes. It is investing heavily in autonomous driving technology. The company has a major presence in the United States, with 19,000 employees and 60 factories and other facilities.

Founded in 1871 by Jewish bankers, Continental had many Jews in high-ranking positions when the Nazis took over in 1933. By 1938, as Germany was gearing up for war, they had all been forced out.

While supplying the German military with tires, bullet-resistant fuel tanks, gas masks and brakes for battle tanks, Continental and its subsidiaries also produced consumer products like soles for shoes and hot water bottles that helped fulfill the regime’s promise to deliver prosperity to the German people.

The first forced laborers at Continental were French or Belgian civilians or prisoners of war. Often the workers were exposed to toxic chemicals without any protective clothing, the study found.

As able-bodied German men were conscripted into the military, creating a severe labor shortage, Continental drew on concentration camp inmates. They were sometimes forced to work in abysmal conditions underground, where production facilities were moved to escape Allied bombing raids.

In the Hanover suburb of Ahlem, for example, about 750 inmates at a time worked in a former mine in extremely damp, cold and dark conditions under supervision of brutal SS guards. The inmates slept crowded into horse stalls, and hundreds died.

Continental also produced soles for shoes, a critical commodity in wartime because of an acute shortage of natural rubber. To test the durability of different types of synthetic rubber soles, Continental enlisted help from the SS, according to correspondence between the feared Nazi organization and company executives.

SS guards forced inmates at the Sachsenhausen concentration camp north of Berlin to walk 11 hours a day around a test track wearing shoes made with the experimental soles, Erker’s report said.

The shoes were often the wrong size, and the inmates were not given socks. The SS guards beat the inmates and made them sing German military songs as they marched a route that took them past the gallows where other inmates were hanged for infractions.

Many of the poorly fed inmates died from the exertion, according to Erker’s study. The SS provided Continental with detailed data on how quickly different varieties of synthetic rubber wore out.

Continental was among German companies that together paid about $4.5 billion in reparations to former forced laborers in the late 1990s. The company said Thursday it would display a commemorative plaque with the names of all the forced laborers who could be identified.

After the war, Fritz Könecke, Continental’s wartime chief executive, was able to reinvent himself as a Nazi resister and escape punishment, Erker told reporters.

In the face of protests by workers well aware of his past, Könecke was barred from resuming leadership of Continental. But it was only a temporary setback to his career. Könecke later became chief executive of Daimler, which was also one of Continental’s biggest customers. Daimler’s website still praises Könecke for “foresight” and credits him with building the company into one of Germany’s largest corporations. Könecke died in 1979.

Continental’s story contains a warning for modern society amid the rise of right-wing and authoritarian leaders, Degenhart said. Without naming names, he criticized leaders who “place their self-interest and quest for power above empathy and responsibility. That was true then, and it’s true now.”

Tweets by @forbes_india
Shinzo Abe, Japan's longest-serving leader, to resign
Richard Heart and the Influence of Bitcoin on the Hex Blueprint