Space balloon rides: Will they work this time?

Seven years ago, entrepreneurs planned trips to the stratosphere, but tourists never got off the ground. They're trying again 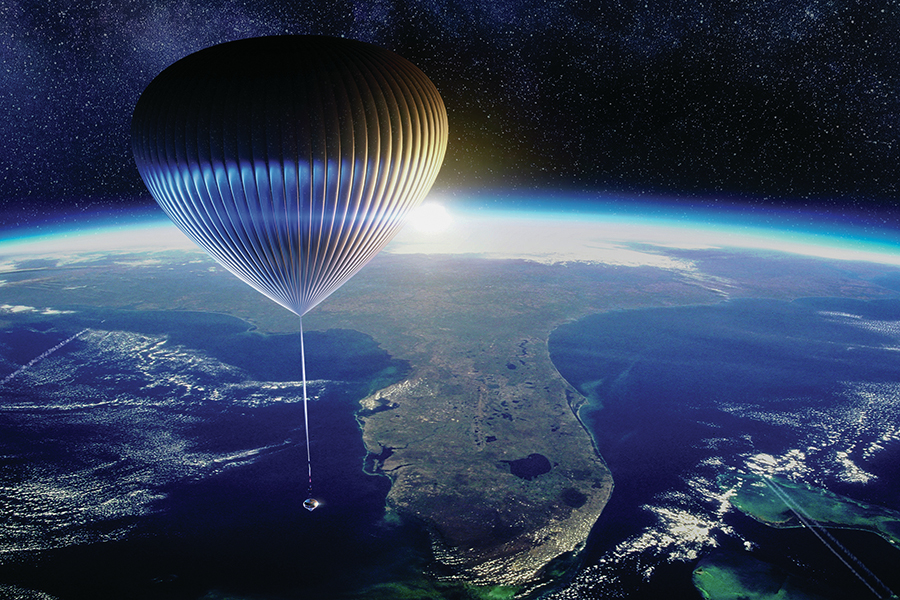 In a concept illustration provided by the company, the Spaceship Neptune, which Space Perspective hopes to operate as a space tourism venture. The balloon journey to the stratosphere, about 19 miles off the ground — would be high enough to view the blackness of space and the curvature of a round Earth.
Image: Space Perspective via The New York Times

Nearly seven years ago, two entrepreneurs unveiled a company, World View, that would take tourists on a gentle balloon journey to the stratosphere, about 19 miles off the ground — high enough to view the blackness of space and the curvature of a round Earth. Those journeys never happened. But on Thursday, those same entrepreneurs are back again, announcing the start of a new company with a similar sounding name, Space Perspective, to offer the same vision. Despite years of promises, the business of space tourism largely remains a dream of the future. Although seven ultrawealthy people have spent tens of millions of dollars each to visit the International Space Station, companies aiming to open up outer space to more people have yet to lift a single paying passenger. The founders of Space Perspective insist that their business plan is sound — offering the sights of space to those who would prefer a leisurely, hourslong cruise to a giant roller coaster ride where the excitement is over in minutes. “It’s so gentle,” said Jane Poynter, who shares the chief executive title with her husband, Taber MacCallum, at the new company. “It’s much less dynamic than a rocket-based flight. I know that there’s a lot of people that either cannot or don’t want to go on a rocket, but they really want to go to space.” In 2013, Poynter and MacCallum said World View’s first passenger trips might take off as soon as 2015. Instead, the company switched its focus to flying smaller balloons for scientific experiments and an advertising stunt in 2017: a highflying chicken sandwich for KFC. Last year, as World View transitioned from startup to maturing business, Poynter and MacCallum stepped away from day-to-day operations. They are still minority owners. Then they revisited their original dream. In many ways, the Space Perspective trips mirror World View’s intended journeys. A giant balloon lifts a capsule holding a pilot and passengers from the old space shuttle landing strip at Kennedy Space Center in Florida. Space Perspective’s design has space for eight paying customers, one more than World View had intended to carry — to an altitude of 100,000 feet. “We ascend under the balloon at a blazing 12 miles an hour,” MacCallum said. “So it takes us about two hours to get up to the float altitude.” That is only about one-third of the way to the 62-mile altitude that is often considered the boundary of outer space, but it is still high enough to see that our planet is indeed round. Poynter said the price for a ride would be more expensive than the $75,000 that World View had planned to charge, probably about $125,000. The new design is simplified. Instead of trying to steer by finding winds blowing in the desired direction, Space Perspective’s balloon will lift off and head in the direction of that day’s winds. By letting out some of the hydrogen that makes the balloon lighter than air, the craft slowly descends to a splashdown in either the Atlantic Ocean or the Gulf of Mexico. The craft will have a parachute to allow a safe return if the balloon somehow deflated. Poynter said Space Perspective has to obtain enough investment for its initial development work, including an uncrewed test flight in the first quarter of next year. If all goes according to plan, the first flights with passengers might take off around the beginning of 2025, nearly a decade after the target date the founders had set for World View. In addition to World View, Poynter and MacCallum have attempted other ambitious space projects. They worked on the balloon and craft that lifted Alan Eustace, a Google executive, to near the top of the stratosphere for a record-setting parachute dive in 2014. They also collaborated with Dennis Tito, an entrepreneur who is one of the few private citizens to visit the International Space Station, on Inspiration Mars, a private endeavor to launch two people on a flyby of the red planet. That proved out of reach because available rockets were not powerful enough. “We have done a lot of hard things in our day,” MacCallum said, “and some have worked out and some of them haven’t. And, some of them were, ‘Wouldn’t it be fantastic?’ Maybe low probability, but worth giving it a shot like Inspiration Mars.” Poynter said a marketing study that Space Perspective commissioned found that roughly 2 million people would be interested in their balloon trips, potentially a market worth a quarter of a trillion dollars. “Which is really good,” she said. But getting to space on a budget has been harder and slower than many expected, and the market remains untapped. Some companies went out of business long before their spaceships were complete. Richard Branson’s Virgin Galactic, founded in 2004, has flown test flights of its rocket plane to the edge of space with its employees aboard, but has not said when its first commercial flights will begin. Tickets cost about $250,000. Blue Origin, owned by Jeff Bezos, the chief executive of Amazon, has conducted successful tests of its small, reusable rocket and capsule without any people aboard. It also has not announced when tourists will climb aboard or even how much a ride will cost. SpaceX, the rocket company founded by Elon Musk, may also get involved in space tourism with the Crew Dragon capsule it developed for NASA, but those would be orbital trips costing tens of millions of dollars.

Tweets by @forbes_india
Podcast: How these startups successfully pivoted during Covid-19
Britain grapples with its racist past, from town square to board rooms