Ten reasons why steel stocks remain out of favour

Steel stocks have so far stayed aloof from the market rally. However, the sector can turn the corner if policy logjams are cleared and there is fresh impetus from 'Make in India' 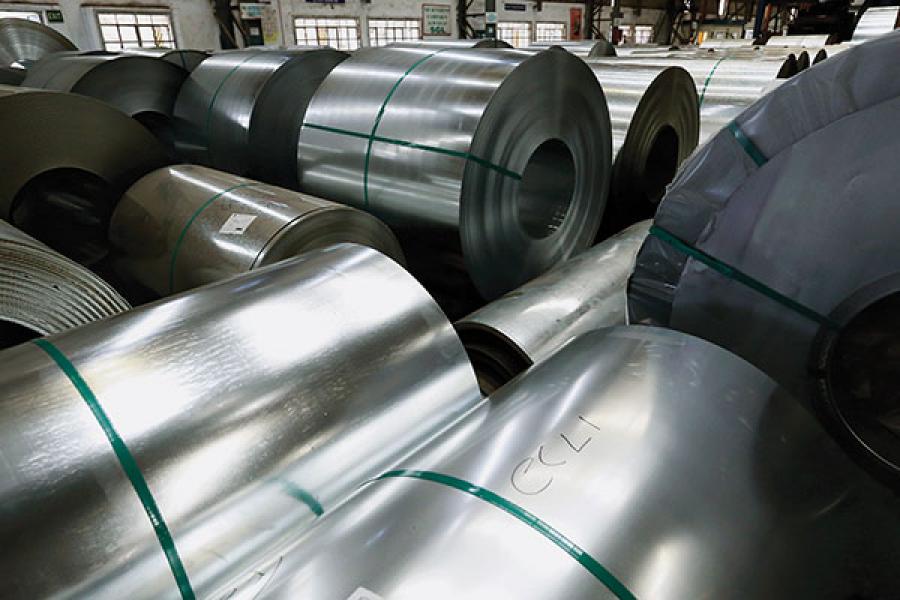 Image: Getty Images
Steel demand is primarily driven by the infrastructure, consumer durables and automobile sectors, all of which are stagnating

Since 2009, most indices have ascended one summit or another. Stocks of major Indian steel producers, though, have not participated in these rallies.

The poor stock performance of steel companies is symptomatic of their weak financials. Struggling with average operating margins of 10-12 percent, the businesses are returning very low levels on capital employed —an average of just above 8 percent for FY14 (consolidated level). Data for the first three quarters of FY2014-15 suggest no improvement due to certain fundamental concerns.

These concerns range from global demand-supply equations to strategic changes in the industry and company-specific factors: 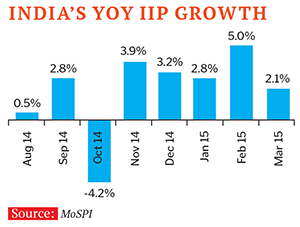 1. Dipping demand
Steel demand is primarily driven by the infrastructure, consumer durables and automobile sectors, all of which are stagnating. The Index of Industrial Production’s (IIP) impressive 5 percent growth in February petered out in March. The auto segment, which accounts for about 10 percent of steel use in India, has seen growth rates decline from 26 percent in FY10 to 3.5 percent in FY14 and an estimated 7 percent in FY15. 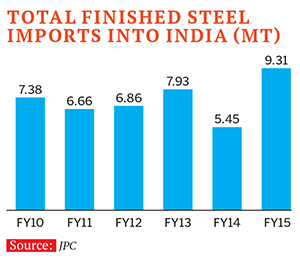 3. Falling exports
Slowing rates of growth globally and cheap Chinese and Russian steel mean a lack of demand for Indian steel in global markets. From being a marginal net exporter of steel in FY14 (0.53 MT), India went to importing a net volume of 3.81 MT in FY15 as exports declined 8 percent to 5.5 MT.

4. Chinese slowdown
China consumes nearly 50 percent of the world’s steel and its growth determines prices. At 7 percent, China’s growth this fiscal was at a six-year low. An industrial slowdown and a weak housing market reduced steel demand. China’s leadership has lowered its official growth target for CY2015 to around 7 percent—the nation’s slowest annual expansion in 25 years—as it rebalances towards a less investment-driven model.

5. Falling global iron ore prices
Global supplies of iron ore have hit record levels on the back of continued investment by mining majors. This coincides with China’s slowdown resulting in a massive price slide of 70 percent from $190 in 2011. Current prices are 30 percent below the January 2015 figure of $71. Despite the recent rally, most analysts estimate prices to remain in the $50-55 range. Steel prices are correlated with iron ore prices, leading to worsening realisations.

6. Alternatives to steel
Steel faces increasing challenges from substitute materials such as aluminium (which is being increasingly used in cars due to its anti-corrosive properties and lighter weight), carbon fibre (popular for its strength, low cost, moldability and light weight), cement, bamboo (that has a tensile strength higher than steel’s) and wood.

7. Lower steel intensity
Steel intensity has been falling steadily over the years. A good indicator is the continually reducing overall weight of automobiles. Additionally, the proportion of steel used in automobiles, too, has steadily come down. Building technology has rapidly evolved—the 2012 London Olympic stadium used a quarter of the steel that the 2008 Beijing Olympic stadium did.

8. High debt levels
The combined debt of India’s four major steel producers—JSW Steel, Jindal Steel, SAIL and Tata Steel —stood at a staggering Rs 1,61,400 crore at the end of FY14. Debt-to-equity levels in excess of 1.5x have meant that most of the modest operating income is used to service debt rather than fund growth.

9. Regulatory uncertainty
In the aftermath of the coal scam, approvals came to a standstill. Mining leases were suspended and penalties imposed on many steel companies resulting in higher cost of raw materials and litigation costs.

10. Lower supply of iron ore
Suspension of iron ore mining in Goa and Karnataka led to the peculiar situation of India turning into a net importer of the mineral after years of being a net exporter. This led to increased costs for producers as well as periods of inability to produce steel due to non-availability of ore.

What next?
While overwhelming, the above factors do have a few short- to medium-term offsets that could lead to a re-rating of the sector. The industry has been pushing for higher tariffs on imports and exclusion of steel from FTAs. The government has appeared sympathetic towards this demand and import duties on finished steel may go up. The successful round of coal auctions and resumption of ore mining in Goa and Karnataka have led to improved sentiment. Large-scale manufacturing capacity addition under ‘Make in India’, as and when it happens, will be steel intensive. The PM has said the steel industry will play a pivotal role in this effort.

The government has made its intent clear—the priority shall be reviving investment while balancing fiscal needs. Government expenditure will be followed by private investment eventually and most of this revival has to feed into steel demand. In other words, going long on India means going long on steel.

Most steel majors have invested heavily in capacity additions as well as in moving up the product value chain. The high levels of operating leverage imply that a demand revival will lead to a sharp reversal in the financial under-performance or that’s what the theory says anyway; till then, if you are invested in the sector, you would do well to build nerves of steel.

(The writer is an independent research consultant)

Tweets by @forbesindia
Mayweather vs Pacquiao: Lords of the ringside
Sun Pharma sees 70% increase in revenues in FY15