The Extreme Right Comes Back to Europe

Fascists gain strength in the continent's governments amidst the economic slowdown 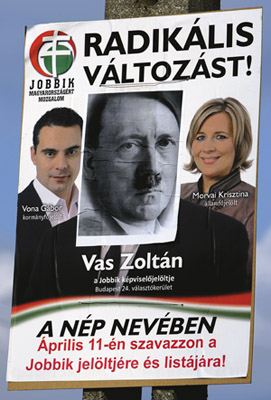 Image: Karoly Arvai/ Reuters
THE NEW OLD FACE A portrait of German dictator Adolf Hitler is seen pasted over an election poster of the Hungarian far-Right party Jobbik in Budapest, in this March 25, 2010 file picture

Sixty-seven years after World War II, the ultra-Right is on the march again. Like stock monsters in a cheap horror movie franchise, once-marginal fascist groups are now gaining real political power in Europe.

Hard-line anti-immigrant parties have done well for years in Dutch and French elections, but in southern and eastern Europe, out-and-out fascists are now winning seats.

Despite campaigning under a flag that looks a lot like a golden swastika, the ultra-Right Golden Dawn party won 17 seats in the 300-seat Greek legislature in May. Members also have the same penchant for outrageous behaviour as the original Nazis. A number of members have been arrested for beating up immigrants, and on June 7, one Golden Dawn MP—the party’s spokesman—even assaulted two female MPs on a live TV discussion programme, throwing a glass of water at a far-left legislator and after a Communist MP on the programme protested, punched and slapped her in the face three or four times.

Hungary Tilts Right
Golden Dawn’s hold on power is still uncertain. As no government was able to coalesce after last month’s vote, new elections are being held on June 17. But in Hungary, it looks like tomorrow belongs to the Jobbik party.

Since 2010, Jobbik has held 46 seats in the 386-seat parliament, making it the third largest party, after the socialists, who hold 48 seats. If elections were held today, Jobbik would poll second: The latest polls show the party has 18 percent support.

Led by 33-year-old Gabor Vona and backed by a highly professional social media machine (top headline on the English language Facebook page this week, “Vona urges fight against EU which colonises and enslaves Hungarians”), Jobbik sees itself as making Hungary free for Hungarians—that is, as long as you’re not Roma (gypsy) or Jewish.

Dangerously for minorities, Jobbik’s perspective is far from alien to the average Hungarian. “Racism/anti-Semitism is such an integral part of Hungarian culture that it’s seen as natural, if not necessarily good,” writes Jim Tucker, an American translator of Hungarian working in Budapest.

Although its marketing approach may be up to the minute, the Jobbik party is, like Golden Dawn, not shy about its fascist roots. At the swearing-in of parliament in 2010, Vona showed up in the black vest of his banned paramilitary club, the Magyar Garda (Hungarian Guard), whose uniforms have a similar look and insignia as those worn by Hungarian fascists in the 1930s and 1940s.

Although Jobbik still has little direct power, its influence has helped tilt Hungarian politics sharply right, as Fidesz, the ruling party, tries to co-opt some of its positions. It’s partly a political gambit, Tucker argues, as “nominally centre-Right Fidesz, seeing its weak ratings, is poaching voters from far-Right Jobbik by aping the latter’s platform.”

The Hungarian economy may still be a mess, but when it comes to bringing back the bad old days culturally, Fidesz has delivered. Three anti-Semitic writers have been reintroduced in the national school curriculum this year. Statues and plaques of Miklós Horthy, Hungary’s leader in the 1930s and 1940s, are also popping up around Hungary now, despite the fact that he was a notorious anti-Semite, and as head of state in 1944, sent 400,000 Hungarian Jews to Auschwitz.

And just two weeks ago, a high-ranking Fidesz member visited Transylvania, in Romania, and bowed his head at a memorial for Nazi sympathiser József Nyírö, one of the rehabilitated writers.

Perhaps even more ominous to Tucker than the government’s new line is his sense that middle class public opinion is also changing. “Middle-class voters who wouldn’t have touched this stuff with a 10-foot pole years ago are now acquiescing in this historical personality-cult, or even joining in its chorus,” he says. 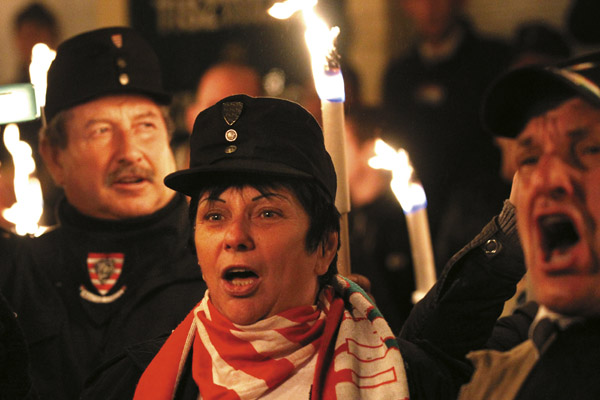 A Bigger Worry
Economically, David Lewis-Baker, a professor emeritus of history at the University of Warwick and expert on the economics of fascist regimes, sees a lot of individual misery but little macroeconomic pain ahead if the fascists continue to gain strength.

The economy is already such a mess, he says, that there’s not much more the Fascists could do to make it worse.

“If any of the current crop of far-Right parties were to gain decisive power in a European country (and there are some ultra-conservative nationalist governments already in place) the economic impact would fall mainly on immigrant groups and other minorities (women, gays etc),” he writes in an email.

What worries Lewis-Baker more is not so much the growth of the ultra-Right in democracies as the possibility that austerity measures undermine the ballot box altogether.

“[T]he real problem will come if Spain and/or Greece revert/s under the constant pressure of neo-liberal austerity-alone measures to some form of military dictatorship once again, since that will pose a much more serious threat to the EU project and liberal democracy in Europe.”