The team that Liverpool forgot

Liverpool's men have added a Premier League crown to their European and world titles, while the club's underpowered, overlooked women's team has just been relegated 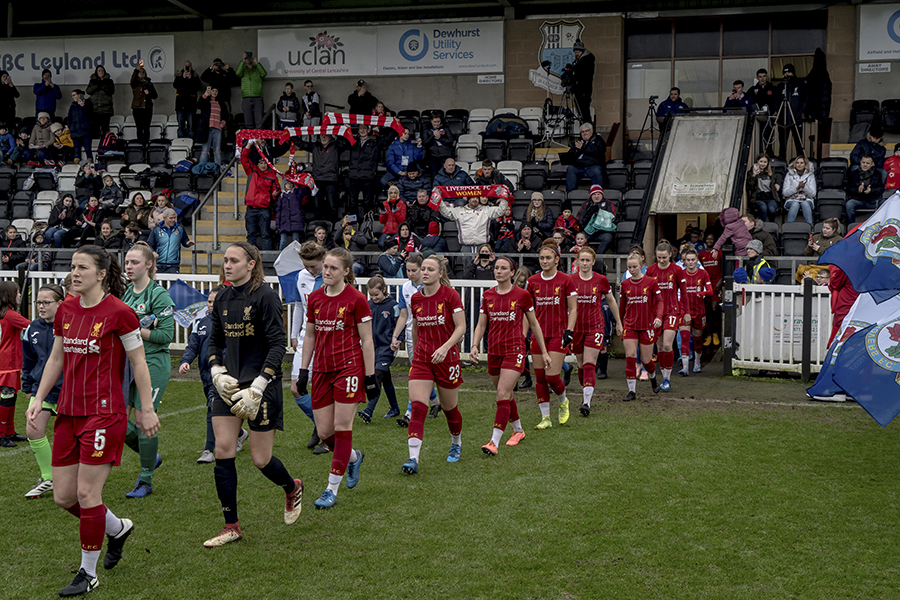 Liverpool players before a game against Blackburn in Bamber Bridge, England, Jan. 26, 2020. The match was moved because of the poor state of the team’s usual field. Liverpool’s men are on the verge of adding a Premier League crown to their European and world titles, while the club’s underpowered, overlooked women’s team has just been relegated. (Andrew Testa/The New York Times)

BAMBER BRIDGE, England — For a few minutes, right at the start of the second half, Vicky Jepson tried to sit down. Jepson, Liverpool’s coach, arranged a blanket neatly over her legs, to stave off the bitter winter cold, squeezed in alongside her players on the substitutes’ bench, and sat still for as long as she could. It should have been a pleasant way to pass the time, as relaxed an afternoon as Jepson might have had all season. Her Liverpool team was methodically cutting through its opponent, Blackburn Rovers, its lead going from 4-1 to 5-1 and on to six, seven and eight. Even then, though, sitting still does not come easy to Jepson. Instead, she found herself back on her feet again, pacing and prowling. Jepson is an active, thoughtful coach, not a bawler and bellower. She offered precise, corrective advice — where to run, when to overlap, where to stand — rather than meaningless motivational phrases. Her instructions were surprisingly detailed, occasionally drifting into coaching jargon. Her players, though, listened intently, taking it all in. That afternoon in January was supposed to be Liverpool’s springboard. The previous week, Jepson’s team had won its first game of the Women’s Super League season. Sweeping past Blackburn, in the FA Cup, had the air of a corner being turned. Jepson spoke afterward of how the victory might restore her players’ composure, relieving the anxiety that had set in. In the end, the day proved nothing more than some respite. When the WSL season was shuttered in March, Liverpool was rooted to the foot of the league table. It had still won only one game. By May, it was seeing a flood of players at the end of contracts leave the club. Many of them, including Scottish midfielder Christie Murray and English striker Courtney Sweetman-Kirk, explained their decisions by suggesting they wanted to be somewhere they could “enjoy what I love again.” The thinly veiled subtext was, of course, that taking pleasure and pride in their jobs had become impossible at Liverpool. And then, in the first week of June, it was announced that the WSL season would be decided on a points-per-game formula. Chelsea was crowned champion. Liverpool, which had eight games left, was relegated. There was sympathy for Jepson, and for her players, but little or none for the club. To many, Liverpool had got what it deserved. 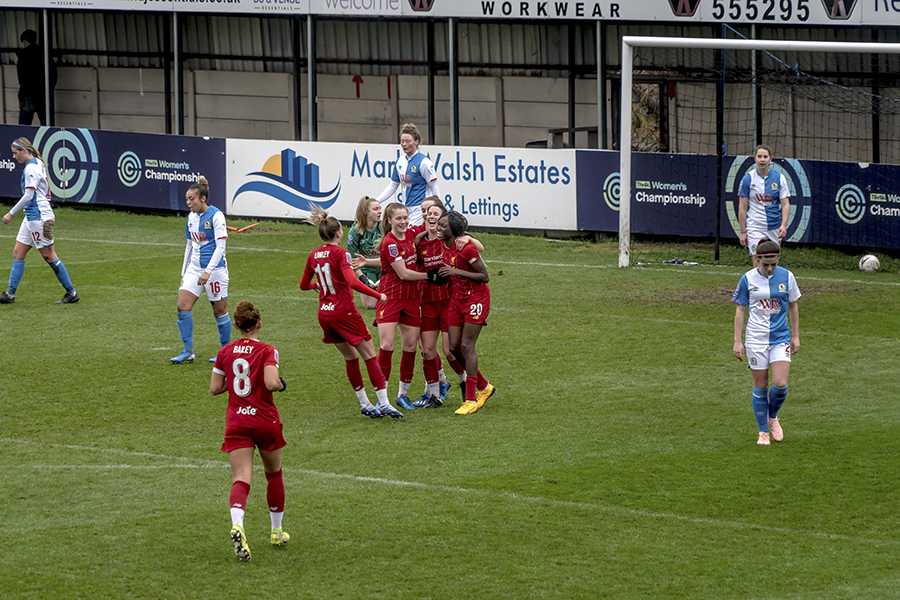 Liverpool players, in red, celebrate a goal during a game against Blackburn in Bamber Bridge, England, Jan. 26, 2020. Liverpool’s men are on the verge of adding a Premier League crown to their European and world titles, while the club’s underpowered, overlooked women’s team has just been relegated. (Andrew Testa/The New York Times) At a time of rapid growth for the women’s game in Europe, with booming interest and increasing investment — even from a number of teams, like Manchester United and Real Madrid, that had been slow to form a women’s division — at least one former player accused Liverpool of “playing at” women’s soccer. Even those inside the club wondered if it needed to decide if it was “going to take this seriously or not.” After her departure, Sweetman-Kirk talked about not only a lack of investment by the club, but a “lack of importance” afforded to the women’s team. The contrast with the men’s team was a sharp, damning one. Jürgen Klopp’s Liverpool is the world and European champion. When the Premier League resumed last week, Liverpool needed only two wins to end its 30-year wait for an English championship. It pays out $392 million a year in salaries to its players. Liverpool’s women, on the other hand, were hardly paid salaries commensurate with their status as elite athletes. Until a former coach complained, they had been housed in substandard accommodations. Only 10 staff members were considered full-time employees, in a year when the club as a whole had reported a record revenue, as well as a record profit. Both of Liverpool’s first teams had been taken on last year’s preseason tour to the United States, but their treatment had been so different that many of the women’s players wondered why they had been invited at all. Once the Liverpool women returned to England, they were playing their home games at Tranmere, on a field once described by Chelsea coach Emma Hayes as a stain on the club. What seemed to capture the dichotomy best, though, was the fact that when Liverpool unveiled plans for the club’s new training facility, it did not contain provisions for both the men’s and the women’s teams. Peter Moore, the club’s chief executive, has described Liverpool as “two teams, one club.” Reality has made that look like a hollow slogan. As the criticism of its treatment of its women’s team built over the course of the season — its struggles painted in sharp relief by the concurrent success of the men — Liverpool offered a partial rebuttal. The club contended that its budget, while less than Chelsea, Manchester City and Arsenal’s, is competitive with the top half of the WSL. It said that it provided Jepson with a full-time doctor, physiotherapist and analyst, still not standard among top-flight teams in England. And though the issues with the field at Tranmere have caused embarrassment and consternation, the club is adamant it is still a better class of facility than many women’s teams have access to. But Liverpool also asks its women’s team — to some extent — to be self-sustaining. While the women’s team’s budget is subsidized by income from the men’s game, Liverpool’s owner, Fenway Sports Group, has made clear that to spend more, it must generate more. It is, at least, a consistent philosophy — and one that FSG applies to the men, too — but it gets to the heart of a crucial question for women’s soccer in Europe: How can it reach a point where it can exist, comfortably, independent of the financial support of long-established men’s teams? 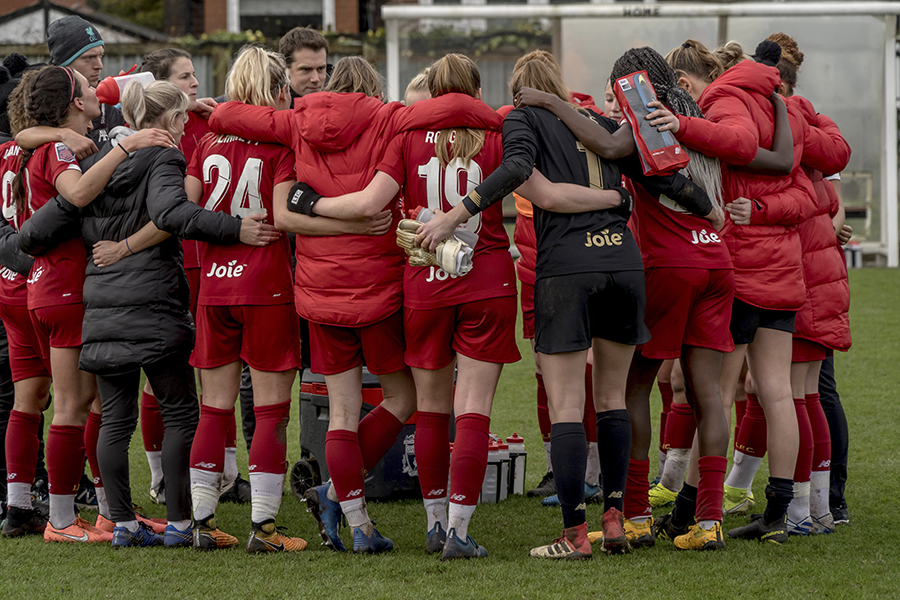 Liverpool players huddle after winning a game against Blackburn in Bamber Bridge, England, Jan. 26, 2020. Liverpool’s men are on the verge of adding a Premier League crown to their European and world titles, while the club’s underpowered, overlooked women’s team has just been relegated. (Andrew Testa/The New York Times) The theory, though, falls down when it confronts reality. There is a difference not just of scale, but of context. The men’s game is at the peak of its earning power. The women’s professional game is still on the ascent: There is a need to speculate to accumulate. Besides, an increase in budget that would barely cause a ripple for a men’s team can have a sizable effect on a women’s side. Most of Liverpool’s rivals have realized that. The WSL, Jepson said, has “stepped on to another level.” “Sam Kerr, one of the best strikers in the world, came into Chelsea for a big wedge of cash,” Jepson noted. “A lot of players that have played on a World Cup platform have come into the league. That is what you have to do if you want to compete with the best.” Instead, she said, Liverpool had decided that its future lay not in buying stars, but producing them. That was how she saw her job: “Creating a pathway so that we can be where we want to be.” In the crowd that day against Blackburn, Stephen Nelson sat alongside his father, Stan. Stephen Nelson is a tour guide at John Lennon’s house, and over the past few years has transferred much of the affection he has always had for Liverpool’s men’s team onto its women’s side. Now, given the choice, he says he will go and watch the women’s team, for all its struggles, over Klopp’s relentless, victorious machine. The crowd for Blackburn’s visit numbered no more than a couple of hundred. The game had been moved from Tranmere — the field was in no fit state to play again — to Bamber Bridge, a small, sleepy town in Lancashire, with a stadium that is home to a team in the seventh tier of English men’s soccer. Nelson, though, was boisterous. He is a part of Liverpool’s unofficial “choir,” and spends much of his time adapting chants more frequently heard for the men’s team at Anfield so they fit the women’s side. The last couple of years have been a test of his faith. “I’ve seen great players playing for Liverpool,” he said. “Teams with a real identity, a real soul. What has happened has been heartbreaking to see.” That day, Nelson was confident the worst might be averted. So, too, was Jepson. She acknowledged that she had experienced frustrations over the previous few months, but she thought that the club had at last happened upon a clearer direction. “We have done a lot of work to ask where we are going,” she said. A few months later, they have their answer, and it is a wonder, really, that they could not see it coming.

Tweets by @forbesindia
'Hamilton' is coming to the small screen. This is how it got there
Can the 4-minute Upma do a 2-minute Maggi?