Titans of Tech testify in their trust-me suits

Jeff Bezos, Sundar Pichai, Mark Zuckerberg and Tim Cook looked more like four guys dressed up in their first graduation suits when testifying to Congress—serious, sincere, a little uncomfortable. Which was the point, of course 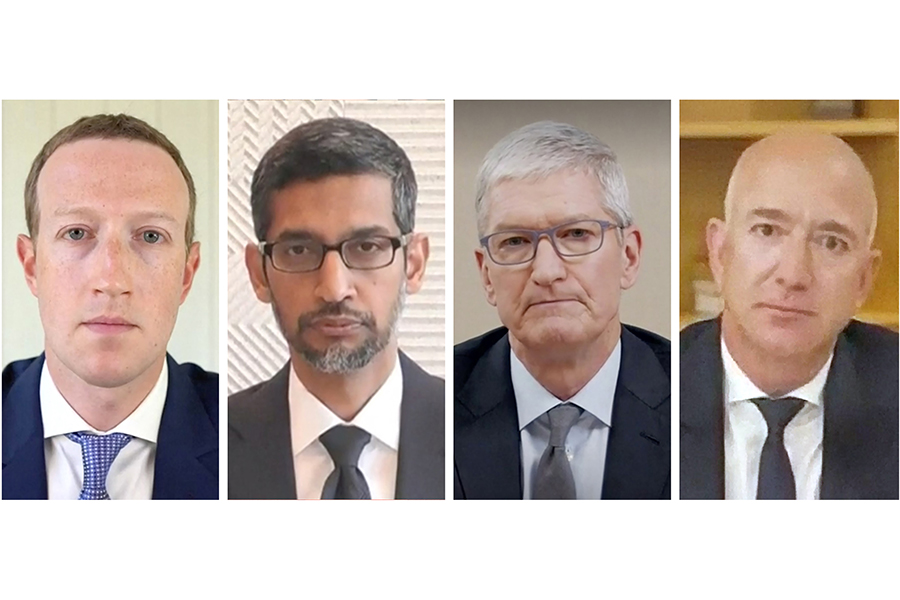 In an undated handout image, from left, Facebook CEO Mark Zuckerberg, CEO Sundar Pichai of Google’s parent company Alphabet, Apple CEO Tim Cook and Amazon CEO Jeff Bezos are seen via videoconference at a hearing of the House Judiciary subcommittee on antitrust, July 29, 2020. The four men appeared before Congress and dressed the part.
Image: Handout via The New York Times
(Critic’s Notebook) They didn’t look like titans. They didn’t look like masters of the universe. They didn’t look like “emperors of the online economy,” as Rep. David Cicilline, D-R.I., chairman of the antitrust subcommittee of the House Judiciary Committee, called them. Nor did they look like “cyber barons,” as Rep. Jamie Raskin, D-Md., said. “They” — the four chief executives of Big Tech: Jeff Bezos of Amazon; Mark Zuckerberg of Facebook; Tim Cook of Apple; and Sundar Pichai of Alphabet, the parent company of Google, all witnesses in a congressional hearing on their market dominance — didn’t even look all that big. In fact, beamed in from their offices on the West Coast because of concerns about the coronavirus, facing down the mask-clad members of Congress who were socially distanced from one another on the wood-paneled stage of the hearing room in the Rayburn House Office Building, the four men looked more like four guys dressed up in their first graduation suits — serious, sincere, a little uncomfortable — than the four horsemen of the digital apocalypse whose planetary power was a threat to one and all. Which was the point, of course. Bezos and Co. were wearing costumes donned with purpose. They knew they were going to be looked at and judged, not just by the men and women in the room, but also by the viewing public. The hearing had been billed as potentially as significant as the Big Tobacco hearings that changed the cigarette industry. There was a lot at stake. And though the whole idea of having to testify via video rather than in person seemed at first to be a disadvantage, it may have worked in their favor, serving to shrink their presence to human size and allowing them all sorts of opportunities for scene setting and character building. So Zuckerberg, framed against a white background that resembled barn siding, didn’t wear his signature Brunello Cucinelli gray T-shirt and black hoodie, but rather a blue suit and a blue-and-white checked tie that was slightly askew, as if he had stuck one finger inside so he could take a deep breath. Cook, most often a model of normcore fashion choices, opted for a dark gray suit and a light gray tie — the same gray as his glasses frames — the knot listing just to one side. A long Zen planter’s worth of verdant greenery was arrayed behind him; beside him was a sustaining mug of tea. Pichai, whose style BuzzFeed once described as “Banana Republic dad,” also appeared in a subtly patterned gray tie, though his echoed the patterned artwork on the wall behind him and perfectly matched his gray suit. Which matched his hair and beard, which matched the gray pottery on the cabinet behind him, out of which bloomed a healthily lush green plant, one part of an artistic and minimal still life. He sat mostly with his hands clasped on the desk in front of him, radiating a sort of beneficent calm. And Bezos, in his first appearance before Congress, eschewed his newly favored leather jackets, open-necked shirts and buff-body tailoring for a simple dark suit and tie, which stood out against his homey light wood shelving, scattered with vases, a few select books and other decorative objects, while he sustained himself with occasional snacks kept just offscreen. Snacks! So what if he’s the richest man in the world. He’s really just like you and me. Not for Bezos or his compatriots the overblown tie knots of the European business moguls or the brassiness of the double-breasted; not for them the look-at-me power red of the president. Not for them the perfectly made-to-measure style, where not a single wrinkle mars the glossy expanse of fabric, which practically sings, “money is no object.” Not for them, even, the flourishes of a pocket hankie or a lapel pin. The reference was, if anything, the men in the gray flannel suits of yore. That they wore such suits at all was a nod to the mores of Washington, because in their natural environment, denizens of the digital world often see the garments as sartorial shackles that reflect old ways of thinking. But these witnesses’ outfits, in their straightforward styling, both separated the chief executives from their traditional camouflage, thus making them seem less subversively Other, and conveyed respect for the office before which the men were appearing. All the committee members wore conservative suits or jackets too, save Greg Steube, R-Fla., who modeled many shades of grape, and Jim Jordan, R-Ohio, who has made appearing in shirt sleeves a trademark. The better, he has said, to feel ready to rumble. Indeed, judging by his undone cuffs, already turned back and poised to be rolled up, as well as his combative language (and tendency to keep forgetting to put his mask on), he was really ready this time. Though his opponents, sitting quietly in their on-screen version of “Hollywood Squares,” Capitol version, seemed to be playing a different part. After all, if you are trying to convince a group of lawmakers that the words they keep using to describe you — “dominant,” “power,” “billions,” “trillions” — are not nearly the whole story, you don’t want to just tell the story of how you are the embodiment of the American success story; of your humble beginnings and crazy dreams. You don’t want to just give voice to your concern for customers and users and small businesses. You want to channel Clark Kent, rather than Superman. Well, they wouldn’t look very good in tights, anyway.

Tweets by @forbesindia
Photo of the Day: Floating on hope in Bihar floods
As the pandemic forced layoffs, CEOs gave up little