At a time when world leaders are vying to appeal to Trump's vanity, Prime Minister Narendra Modi hopes to satisfy his need for affirmation—Trump will almost certainly not be greeted by the 10 million people he expects, but it will look like an enormous crowd nonetheless 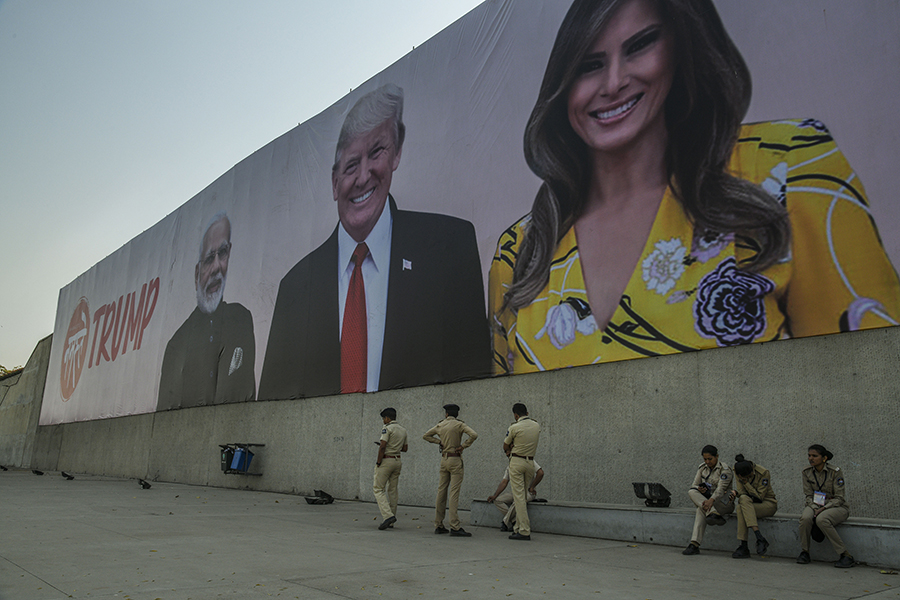 NEW DELHI — One of the most nerve-racking moments for any world leader these days comes with these six words: President Trump is coming to town.

Hosting any American leader is demanding enough with the usual requirements of diplomacy, protocol and geopolitics, but with Donald Trump comes an additional challenge: how to entertain and impress a president who relishes spectacle and cherishes anything that is the first, the most or the biggest.

The British have a queen, so they made a grand show of a state dinner at Buckingham Palace. The French have Bastille Day, so they invited the president to view their elaborate miliary parade down the Champs-Élysées. The Japanese have an emperor, so they invited Trump to be the first foreign leader to visit their newly installed monarch — and threw in a sumo match with a special presidential trophy for good measure.

Prime Minister Narendra Modi of India opted to appeal to Trump’s first love — crowd size — as he stages a rally of more than 100,000 people in Ahmedabad on Monday after a drive in from the airport along roads where perhaps 100,000 more will line the motorcade route. The president will almost certainly not be greeted by the 10 million people he expects, but it will look like an enormous crowd nonetheless and, the Indians hope, satisfy his need for affirmation.

“World leaders are vying with each other to appeal to President Trump’s vanity,” said R. Nicholas Burns, a former undersecretary of state under President George W. Bush who helped pave the way for agreements with India during that administration. “They understand his foreign trips are more about the image he wants to strike rather than substantive breakthroughs between governments.”

White House aides deny that the president’s trips are all about show. The United States and India have important issues involving trade and security for Trump and Modi to discuss, although administration officials briefing reporters before the president’s departure from Washington on Sunday made clear that the comprehensive trade agreement he seeks with India remains far-off.

What has seemed to animate Trump the most, though, are Modi’s promises of cheering crowds. “He told me we’ll have 7 million people between the airport and the event,” Trump told reporters last Tuesday.

Two days later, Trump ratcheted up the estimate to eight digits. “I hear they’re going to have 10 million people,” he said at a campaign rally. “They say anywhere from 6 to 10 million people are going to be showing up along the route to one of the largest stadiums in the world.” 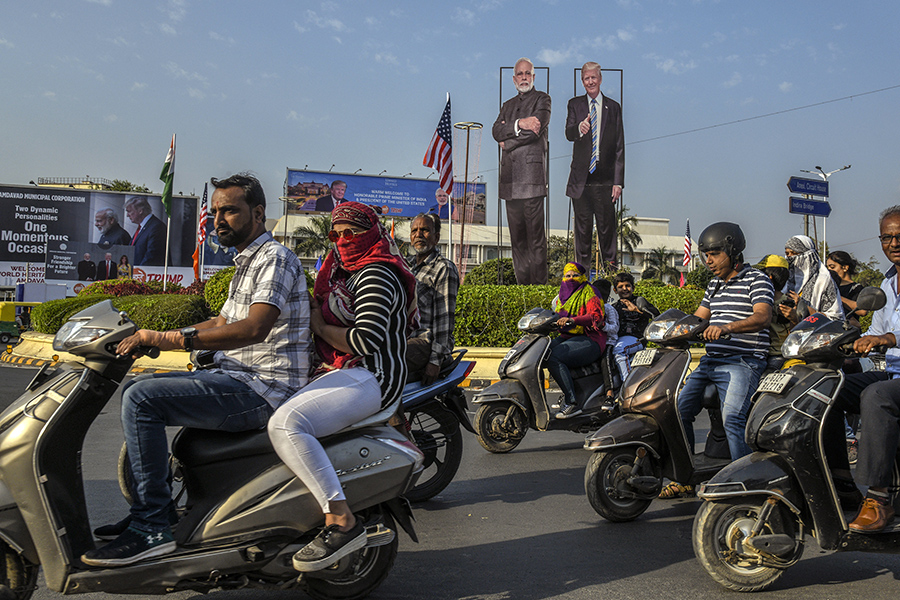 Cutouts of India's Prime Minister Narendra Modi and President Donald Trump at a roundabout in Ahmedabad, India, Feb. 23, 2020. Modi has opted to appeal to Trump’s first love — crowd size — as he stages a rally of more than 100,000 people at a huge stadium in Ahmedabad on Monday Feb. 24, 2020, for the visiting U.S. president. (Atul Loke/The New York Times)

By Sunday as he was leaving the White House to begin his long trip, it had become “millions and millions” of people. “Some people say the biggest event they’ve ever had in India,” Trump told reporters. “That’s what the prime minister told me.”

A crowd of 10 million would exceed the entire population of Ahmadabad, estimated at 8 million. Local officials estimate that it will be more like 100,000, making Trump off by only 99%. But Motera Stadium, which is not really fully built yet, is supposed to become the largest cricket arena in the world.

Other countries could not muster that show of force and so have taken advantage of whatever local assets they might have when Trump has come to visit. For Britain, of course, that would be Queen Elizabeth II, the world’s longest-reigning monarch, who welcomed him to Buckingham Palace last year with an 82-gun salute and a lavish white-tie state banquet.

“Crowd size is important to this president, so he was clearly thrilled to be told there would be 7 million people on the streets” in India, said Peter Westmacott, a former British ambassador to the United States. “We couldn’t manage that in the U.K., but twice in the space of a year he seemed bowled over by the warmth of the welcome he received from the royal family.”

Trump was so blown away by the Bastille Day military parade in Paris when President Emmanuel Macron of France invited him in 2017 that the president insisted on organizing his own U.S. equivalent along the streets of Washington as part of last year’s Independence Day celebration.

Perhaps with that in mind, President Vladimir Putin of Russia is trying to entice Trump to come to Moscow in May by inviting him to the Red Square parade marking the 75th anniversary of the victory over Nazi Germany. Trump, however, appears wary of the awkward politics of such a visit given the election year and Russia’s continued interference in U.S. campaigns.

Japan eschews militarism and therefore military parades, but it sought to make Trump feel special by making him the first foreign head of state invited to meet Emperor Naruhito after his ascension to the throne. The Japanese also asked Trump to present his own trophy at a sumo champion match — a 4-foot-tall object duly labeled the President’s Cup for the event.

“World leaders have learned to shorten or scrap the historical tours, remove local delicacies from the menu and focus on one thing only: feeding his ego,” said Julianne Smith, the director of the Asia program at the German Marshall Fund of the United States. “That’s taken different forms in recent years, but the goal is always the same — make Trump feel like he’s getting something unique: a parade in Paris, a grand state dinner at Buckingham Palace or a sumo match with a President’s Cup in Japan.”

Not every country can compete. When Trump was due to travel to South Korea last year, the government in Seoul fretted over what it could come up with that would seem special. The South Koreans have no queen or emperor. But what they do have is a Demilitarized Zone, where Trump could visit and even, in a surprise first of its kind, step across into North Korean territory and stage a theatrical last-minute meeting with Kim Jong Un.

Critics said that meeting, like a parade or a banquet, was just for the pictures, with no lasting result, and that the president should focus more on policy initiatives when he arrives in India. “Trump would be far wiser to frame the visit on substance — our strong military collaboration with India, Japan and Australia in limiting China, for example, rather than on seeking applause from crowds in a stadium,” Burns said.

But symbolism has its value as well, and if a major trade agreement is not in the offing, then the Indians are determined that Trump go home with warm feelings about their country, throwing in a sunset tour of the Taj Mahal and a state dinner as well.

“I think the optics, he will get more of them than other presidents do, because I think the Indians recognize that that is something that he will want and will appreciate and will perhaps keep them in good stead over the next few months,” said Tanvi Madan, director of the India Project at the Brookings Institution.

And in addition to the crowds, India may have something to offer that other countries do not. “I would not be surprised if the Indians named something after President Trump,” Madan said. Like a village, something they did for President Jimmy Carter when he visited. “I think you will see them take extra efforts on the optics front for this president.”