Skilling: The key to better jobs

Companies working on skilling have grown and evolved, but integrating skills with education is an imperative to deal with underemployment 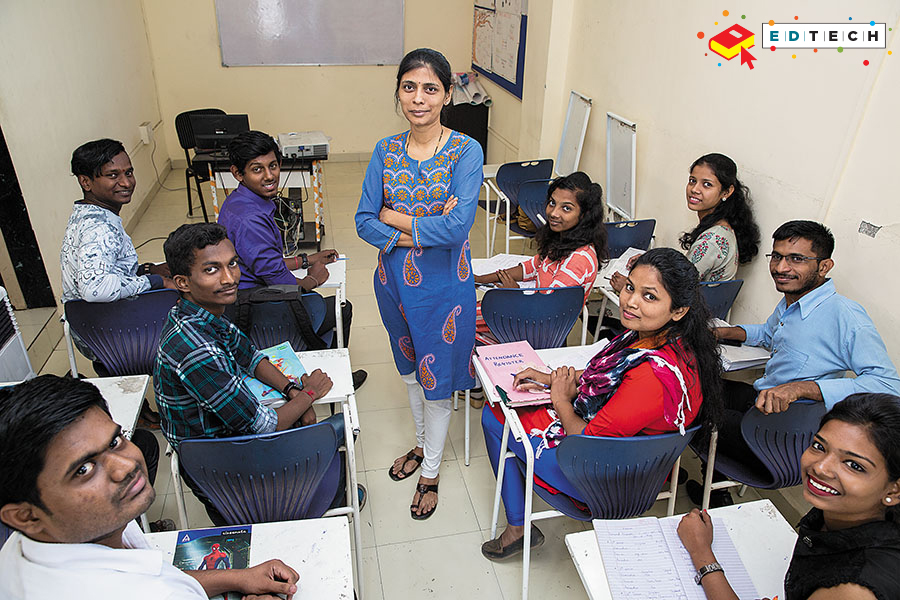 On the fourth floor of a building opposite Thane railway station on Mumbai’s outskirts, 29-year-old Atul Pandey (not his real name) is taking lessons in English speaking and grammar. The resident of Bhayander, a western suburb, who has an undergraduate degree in computer engineering and comes to the training centre by a State Transport bus, wants to hone his communication skills to get a job in a sector like banking and finance.

“I tried for a government job but didn’t get through,” says Pandey. “The centre will help me prepare for interviews, and with placement.” Pandey worked briefly in tech support for an e-distribution company before quitting to study for government banking exams.

The centre is run by EduBridge, a skill development and vocational training organisation. The training, in all of about 255 hours, comprises a 150-200 hours foundation course of English communication, personality development and computer literacy, and about 60 hours of sector-specific skills.

A decade after the Congress-led United Progressive Alliance government first started emphasising on skills training, companies working on skilling are evolving their business models to best address the skill and education mismatch, and deal with the country’s massive unemployment problem. They work with the government on targets, and help corporates with their hiring needs and CSR mandates; but a lot more needs to be done.

The BJP-led National Democratic Alliance in 2015 had set a target of training over 40 crore people in India in different skills by 2022. It has been allocating funds to the Ministry of Skill Development and Entrepreneurship (MSDE), which it set up soon after coming to power in 2014. In the latest budget, Finance Minister Nirmala Sitharaman allocated ₹3,002 crore to the ministry, a marginal increase from ₹2,989 crore that she had set aside in her maiden budget last year.

With a 70 percent placement rate, EduBridge, which was founded in 2009 by IIM Bangalore alumnus Girish Singhania, has since 2010 worked with the National Skills Development Corporation (NSDC), which finances companies to set up private infrastructure for skilling.

It is also one of the many training partners under the National Skill Development Mission. Set up in 2015, the Mission, along with the Skill India campaign, sets targets for skilling and placement and works with sector skill councils and training partners. The Pradhan Mantri Kaushal Vikas Yojana (PMKVY) is the flagship scheme of the MSDE that aims to enable youth to take up industry-relevant skill training and assessment, which is completely paid for by the government.

While unemployment has been at an all-time high, and sectors like manufacturing and retail have seen a decline, demand in service sectors, primarily banking and finance, and entry-level jobs, remains high. But the problem of mismatch between education and skilling remains. According to companies that work in skilling, diplomas and degrees, even in engineering, don’t always mean people have developed the skills that are meant to come with them. Sometimes their schooling system is outdated, or there is a huge gap in spoken English. “And in this digital age, there might be people who don’t even know how to switch on a computer,” says Singhania.

“If I have undergraduated, I may believe I am skilled. But the market may not think so. The country is facing that challenge,” points out Gayathri Vasudevan, CEO, LabourNet, which started out as a non-profit but became a for-profit company in 2008. It has since worked with the government, initially availing a soft loan and continuing to work as a training partner. The social enterprise has completed almost 55,000 trainings under the PMKVY with 60 percent placements. LabourNet had a revenue of ₹115.6 crore in FY19 and aims to be a ₹1,000 crore company by 2022.

Singhania recollects a student from one of the first few batches that EduBridge ran. “He was an MPhil in Economics and I was surprised to see that profile in our kind of programme that would get them an entry-level job,” recollects Singhania. “But when the interviews took place, we realised that even though he had the degree, he could not even do something as simple as how to divide 10,000 rupees between 20 people. That was a question posed by a microfinance recruiter. So that was a real eye-opener where we realised that the education level does not really guarantee anything in terms of usable skills and mindset.”|

Makarand Vagaskar, chief operating officer at Kohinoor Technical Institute (KTI), points out that there is a lack of industry-faculty interaction because of which the skillsets provided by the educational and training institutes do not suit the employers’ requirements. The institute, founded in 1967, got affiliated with NSDC in 2014.

Executing projects like PMKVY and state-level skill development schemes calls for the ability to penetrate remote geographies and have access to facilities and manpower. And because they have built their expertise and network, skilling companies have also found business in running CSR for corporates, setting up hiring centres and developing customised content for them.

For firms looking to hire, the training involves not just addressing the educational mismatch but preparing students in their transition from college to corporate. “The latter transition requires a stepping stone in between because otherwise organisations like ours spend a lot of time moulding them into a work environment, right from their dressing sense to adhering to the timelines to the business communication; supervisors on the floor find it very difficult to spend time with these basic onboarding tasks,” says Alpana Shirgaonkar, executive director at SKP Business Consulting LLP.

The students trained at the centre managed by Edubridge for SKP are absorbed at the company. “We typically hire 80 percent of the candidates,” says Shirgaonkar, adding that each batch comprises of 20 to 30 people for the 40-day course.

In the years since the government decided to focus on skilling, experts say that less than one-tenth of the 40 crore people training target has been achieved so far. According to the government, the MSDE has annually trained approximately 60 lakh candidates under various schemes. “Under PMKVY 2016-20 alone we have trained more than 73 lakh candidates,” says Praveen Kumar, secretary, MSDE. “Over 30 lakh candidates have been certified under PMKVY 2016-20 placement-linked components, of which close to 52 percent have been linked to employment.” He adds that the ministry is “creating a framework for horizontal and vertical mobility from general education to skill development and vice-versa with the Ministry of Human Resource Development.” But despite budgetary allocations and the best intentions, challenges remain.

“I think today the conversation on skills and jobs is very high. The skills ministry has resulted in a lot of knowledge,” says Vasudevan. “There has been progress, but it could have been faster,” she adds.

Companies say they are plagued by delayed payments and uncertainty. “Overemphasis on documentation and undue delays in clearance of reward disbursement to training partners builds a stress in the cash flow making it difficult to sustain the schemes,” says Vagaskar, adding that they have consciously scaled down government associated business over the last two years. Ten percent of their business now comes from KTI’s CSR working model.

Singhania concurs. “If I’m a private sector company, I am setting up infrastructure, recruiting a team. Unless you give me the visibility that you work here for five years and train as many as you can, and place as many as you can, the infrastructure goes to waste,” he says, adding that the government should give flexibility instead of training batches as per targets. “If we had got to do that, we would have probably been able to train maybe 3x of what we have been able to train so far,” says the founder of EduBridge which has also scaled back the work they do with the government.

The company, which has a topline of about ₹50 to ₹60 crore, had taken a soft loan of about ₹2.5 crore from NSDC in January 2011, which has almost been repaid. They have raised about $2.5 million from Insitor Impact Asia Fund and Acumen Fund till date. “The assessments of students post training should also be made watertight,” adds Singhania.

Aditya Malik, founder of Talentedge, which has been skilling youth under the PMKVY scheme in 14 states and has trained 18,000 youth till date in areas like retail and ITES, says the government should take advantage of technology. “I know you can’t take certain things online, like if you are teaching somebody machine operation, but if you are allowed to build the simulations, you can do at least 60-70 percent online and 30-40 percent in a machine lab. That will help in two things: Quality will go up, and control and monitoring will become much better.”

Vasudevan says the key is whether we are able to ensure skills are integrated into education. “You have to have interoperability between skills credits and education credits. That is what we have to work on in the coming years as a country,” she says adding that it means major reforms, and breaking it up sector by sector.

Tweets by @forbesindia
Trump Visit: For a President Who Loves Crowd Size, India Aims to Deliver
Meet the US delegation accompanying Trump to India