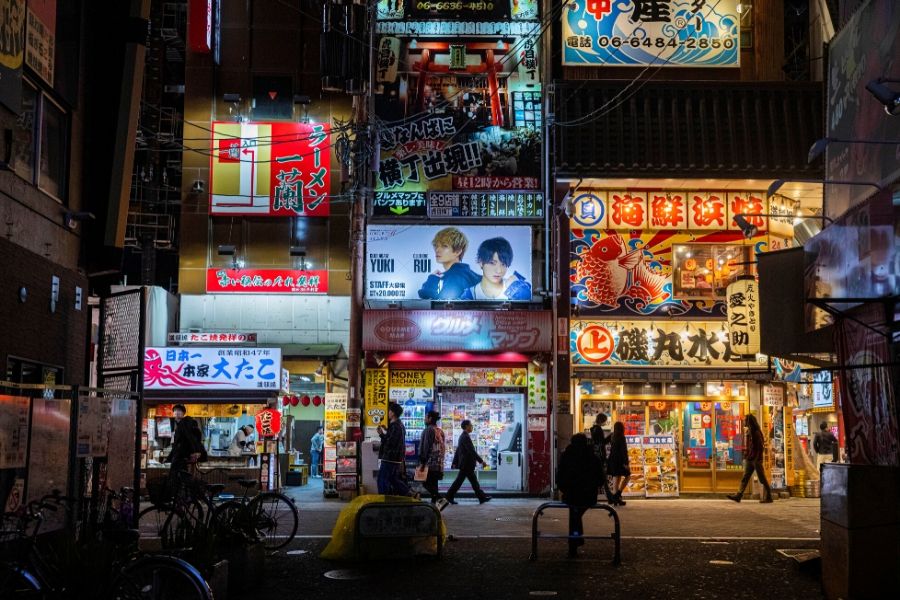 People walk through Osaka, Japan, March 25, 2020. Japan has puzzled epidemiologists as it has avoided the grim situations in places like Italy and New York without draconian restrictions on movement, economically devastating lockdowns or even widespread testing
Image: Hiroko Masuike/The New York Times

Asian markets fell in early Wednesday trading in Asia as investors digested a steady drip of worrying news about the economic ramifications of the global coronavirus outbreak. Major indexes in Japan, Hong Kong and South Korea were modestly lower midday, as financial markets settled into a slow grind of bad news. While the panic of recent weeks appeared to have subsided, numerous signs pointed to glum prospects for a quick recovery. After Wall Street’s Tuesday close, President Donald Trump said at a news conference that the United States would face “a very painful, very very painful two weeks.” U.S. government scientists projected that the outbreak could kill up to 240,000 Americans. Futures markets predicted Europe and the United States would open lower later Wednesday. Prices for long-term U.S. Treasury bonds, a traditional investment safe haven, rose, as did gold futures. Oil prices were mixed. At midday, Tokyo’s Nikkei 225 index had slid 1.2% and the Hang Seng index in Hong Kong had dropped 0.8%. South Korea’s Kospi was down 0.1%. Markets in mainland China, which often move at odds with stocks elsewhere, were modestly higher, with the Shanghai Composite index rising 0.4%. Wall Street’s Stomach-Churning Month Ends With a Drop March was a month of head-snapping turns in financial markets: The S&P 500 suffered its worst one-day drop since 1987 before later recording its best three-day run since 1933, oil prices crashed, interest rates plunged and Wall Street’s more esoteric markets seized up. The roller coaster came as investors found themselves overwhelmed by a shutdown of the world economy. Early in the month, the record-breaking, 11-year bull market ended, and trading was halted more than once to prevent a crash. An enormous fiscal and policy response at the end of the month helped undo some of the worst of the damage. The S&P 500 recouped more than half of its losses in the final week of the month after lawmakers passed a $2 trillion spending package and the Federal Reserve said it would buy an unlimited amount of government-backed debt to keep markets functioning. But even as stocks rebounded well off their lowest point, March was the worst month for the S&P 500 since October 2008, when investors feared a collapse of the economy in the wake of the global financial crisis. The S&P 500 fell 12.5% this month. The index is down 20% so far this year. On Tuesday, stocks fell 1.6%. Calmer markets do not mean the worst is over. As consumers stay home and factories shut down, millions of workers have lost their jobs. Economic data showing the scale of the damage has only just begun to roll in, and Wall Street analysts continue to downgrade expectations for the economy. Goldman Sachs, for example, now expects U.S. economic output to plunge at an annualized rate of 34% in the second quarter. The unemployment rate will hit 15%, the bank said in a research note on Tuesday. But the worst of the recent swings in asset prices seem to have ended, and investors are trying to find a footing. “We appear to be seeing improved sentiment,” Yousef Abbasi, global market strategist at INTL FCStone, a financial services and brokerage firm, wrote in a note to clients on Tuesday. “When sentiment does start to improve around the virus and its ultimate economic impact — the market will find it difficult to ignore the size and scope of the fiscal and monetary stimulus that has been undertaken.” More women than men may lose their jobs because of the outbreak. The economic effect of the pandemic in the United States will be different from the 2008 crash of the markets in at least one way: It is likely to lead to more job losses for women than men, at least in the short term, according to a new paper by researchers at three universities. “In all major recessions, including the financial recession 10 years ago, many more men lose their jobs,” said Matthias Doepke, an economics professor at Northwestern University and one of the authors of the research paper. “This has to do with two things: Usually the most-affected sectors are things like construction and manufacturing, which are male-dominated. And the second thing is this notion of ‘insurance in the family’ — that some married women decide to actually work more during a recession to make up for the job loss of the husband.” But in this downturn, the sectors that are going to be most affected — hospitality, retail, travel — have fairly high female employment, Doepke said. However, the paper suggests that the new work-from-home policies may also promote gender equality in the long run. “We expect that this added flexibility is going to stay — not completely — but to a large extent after the crisis,” Doepke said. Catch up: Here’s what else is happening. — Brooks Brothers said Tuesday that it would use its manufacturing facilities in New York, North Carolina and Massachusetts to make masks and gowns for health care workers. — Tyson Foods said it would pay approximately $60 million in bonuses to 116,000 front-line workers and truckers in the United States. Eligible employees will receive a $500 bonus, payable in the first week of July. — JCPenney became the latest retailer to furlough many of its workers, saying on Tuesday that it was making the move to protect the “future of our company.” The retailer did not say exactly how many of its 90,000 workers would be furloughed, but said it would affect the majority of its store employees. — The Conference Board’s measurement of consumer confidence fell sharply this month, according to figures released Tuesday. It was the steepest one-month drop since August 2011. The data was collected through March 19, before many of the job losses from the coronavirus outbreak hit. — Walmart said it would start providing masks and gloves to workers. The company will also begin taking the temperatures of employees as they show up to work at stores and distribution centers. Any employee with a temperature of 100 degrees or higher will be sent home and cannot return to work until they are fever-free for at least three days.

Tweets by @forbes_india
The Coronavirus and managing your organization's response
We need Amazon during the Coronavirus. That's a problem