Coming on the heels of the spectacular opening ceremony at the Beijing Olympics, London had a tough act to follow. But Danny Boyle and his team more than matched up to the challenge 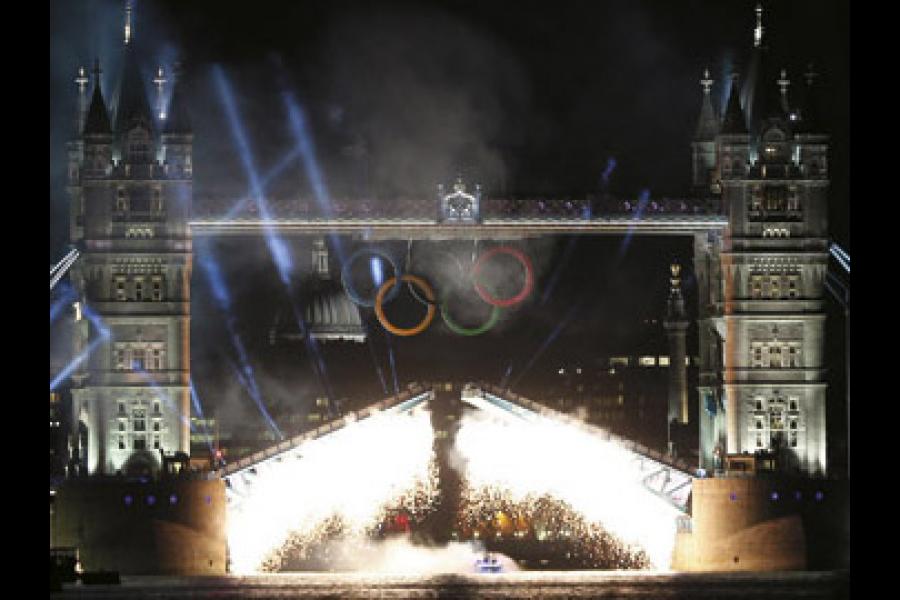 Beginning with William Shakespeare, whose The Tempest inspired the “Isles of Wonder” by Danny Boyle, the Opening Ceremony carried the British theme to the world through the three-and-half-hour marathon that got the 30th Olympic Games off the block.

Coming on the heels of spectacular openings at Sydney in 2000 and Beijing in 2008 with Athens’ Grecian history in between in 2004, Boyle had a difficult task to match and a tough path to traverse. But the country’s history, Boyle’s own creativity and the British genius across various fields mixed with English humour and its penchant for daftness made for a great mix. Above all, it had 79,000 in the stadium and an estimated four billion TV audience across the globe, entertained and enthralled.

But the piece de resistance of the evening was the sequence of a tuxedo-clad James Bond being presented to the Queen. Then, the Queen, in a rose-pink dress, strode briskly through the palace before getting onto a helicopter and being transported over the streets of London and through the Tower Bridge to the Olympic Park. At that precise moment in East London, spectators could hear and see a chopper hovering over the stadium.

Quickly, it was back to the film on the screen once again, showing first the Queen, and then Bond, plunging from it and into the stadium. Bond and the Queen, accompanied by the classic Bond theme tune.

The screen suddenly switched to show the real queen in the same rose-pink dress—making for a very entertainingly filmed entry of the ‘screen’ Queen with Bond on the film and the ‘real’ Queen with the Duke of Edinburgh in flesh and blood, to the applause from the crowd and Jacques Rogge, the President of the International Olympic Committee.

But much before that, with the global audience not yet connected to London through the telecast, the thread was typically British with its sporting offerings like badminton, cricket and football alongside farms being shown in one part of the field, which was converted into a montage of rural English life. The scene included wild flowers, stone cottages with smoking chimneys, poppies, barns and farms with cows, goats, sheep and horses and clouds floating around and a sturdy oak tree, that stayed on field through the evening, symbolising strength and longevity, along with the national flags of 205 countries present at the Games.

Then there was the world famous Red Arrows, the Royal Air Force’s aerobatic team. Their stream of red, white and blue were also the colours on a many young lad’s wig. There was also rain, which Boyle later admitted he had planned for even if it had not occurred naturally. But rain it did, for a while. There also was the London Symphony Orchestra.

The official ceremony began when the world’s largest harmonically tuned bell was sounded at 8 pm by Bradley Wiggins, the country’s latest sporting hero and winner of the Tour de France.

Then followed much else.

Sir Kenneth Branagh, who stood in for actor Mark Rylance, who opted out due to the sudden death of his step-daughter, appeared a little later. Branagh recited what Rylance was to do originally—the lines from The Tempest, “Be not afear’d/the isle is full of noises…” which was Danny Boyle’s inspiration for the evening’s presentation.

The Industrial Revolution, with workers in overalls and bosses in top hats, belching smoke amidst five Olympic rings appearing in mid-air, added to the parade.

The pyrotechnics were one of the highlights as they turned the stadium into a spectacle dominated by streams of light, fire and crackles.

These were juxtaposed with Muhammed Ali, one of the best known Olympians of all time, and the British National Health Service (NHS), one of the world’s most talked about health services.

The evening had a touch of everything from the British Isles that has invaded our lives: James Bond bringing the Queen, “Mr Bean” Rowan Atkinson playing to the theme of Chariots of Fire with one finger on the keyboard, the classic Beatles numbers, ‘Mr Worldwide Web’ Tim Berners-Lee, Harry Potter creator JK Rowling, and much else. The evening was rounded off with a performance by Sir Paul McCartney.

In the midst of so much activity, the Olympic Torch ceremony seemed to have been dwarfed. It was almost forgotten, until the screen flashed pictures of David Beckham carrying the Olympic torch on a speed boat across a glittering River Thames in a James Bond-esque style, and then through the final journey from Tower Bridge to Olympic Park. He was accompanied by Jade Bailey, a young footballer marked out as a star of the future.

On the matter of carrying flags and the teams marching in, India’s flag was carried by Sushil Kumar, while Usain Bolt and Sir Chris Hoy carried the flags of Jamaica and Britain, respectively.

Yes, the evening might have suggested that nothing about the show was serious—entertaining though it was—but it never became trivial.

Yet not all was hunky dory. There was a note of dissonance on Twitter as Conservative MP Aidan Burley tweeted that the Olympics ceremony was “multicultural crap”. His first tweet said, “The most leftie opening ceremony I have ever seen—more than Beijing, the capital of a communist state! Welfare tribute next?” And then followed: “Thank God the athletes have arrived! Now we can move on from leftie multicultural crap. Bring back red arrows, Shakespeare and the Stones!”

A platform for protesters
A major event means a big platform. Not just for athletes and sponsors but also for protesters. No less than 40 groups are planning to stage protests to highlight their grievances and the “corporate dominance” of the Games. Other issues include the cost of staging the event in times when austerity is called for. 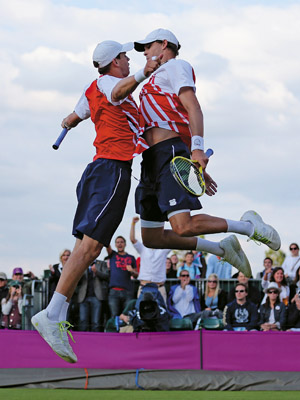 Protesting groups include War on Want, campaigners against the placing of missiles in the capital, local environmental organisations and Occupy London, which set up a camp outside St Paul’s Cathedral earlier this year. According to some of the groups the estimated cost to the taxpayer is between from £11 billion and £24 billion even as UK falls deeper into recession. But much to the relief of the Organisers, the demonstrators do not intend to disrupt the Games.

A crisis averted in time
Well, at least one crisis was averted before it happened. The strike that threatened to impact the Games most was called off a day before it was due to come in force. The Public and Commercial Services Union called off a strike it had set for July 26, the day before the Opening Ceremony. The Union claimed that the Home Office had made commitments on job creation.

Staff at the Home Office, UK Border Agency, Identity and Passport Service and Criminal Records Bureau were planning a strike in protest of job losses. Since it was a day before the Games opened, there were fears that it might lead to chaos. The government had been hoping for a High Court injunction but the Union called it off before one was granted. 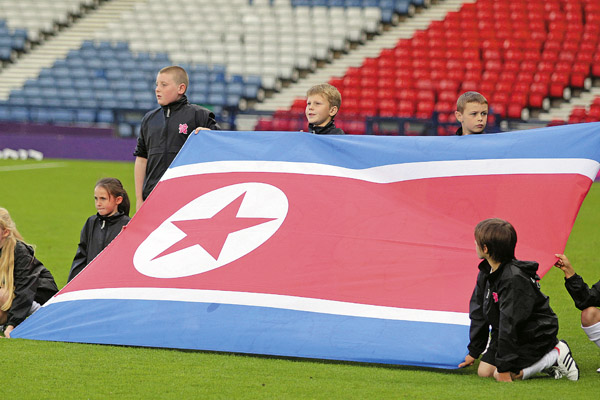 N. Korea angered at wrong flag
The women’s football competition kicked off even before the Opening Ceremony, and with it came the first major political ‘gaffe’. North Korea was due to clash with Colombia in a Group G match, but the start was delayed by almost an hour, as the officials goofed-up by displaying the South Korean flag next to images of the North Korean players. The North Korean players walked off the field at Hampden Park. The match was delayed by 50 minutes and a LOCOG (London Organising Committee of the Olympic and Paralympic Games) statement apologised for the mistake. 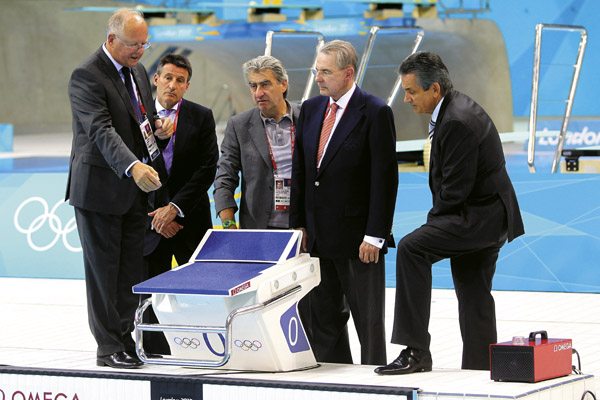 Image: Getty Images
Omega gives swimmers an extra edge
Athletes strive for any small advantage and the swimmers seem to have reached a new high in this regard. At these Games the official timers, Omega, have provided the swimmers a new patented, adjustable slanted footrest for a crouch start with the rear-positioned leg at a 90° angle at the knee. Experts say it generates an optimal starting profile as the swimmer gets greater power when pushing against the starting block.
There is also an enhanced resolution of one millionth of a second. Called the Quantum Aquatic Timer, its resolution is 100 times greater than previous devices and is five times as accurate.

Four years ago in Beijing, high-speed video cameras settled a dispute as Michael Phelps was confirmed a winner over Serbian swimmer, Milorad Cavic in the 100m butterfly by one hundredth of a second after the latter’s coach protested against the result. Cameras confirmed Phelps as the winner. It was Serbia’s first medal and Phelps’ seventh gold.

Olympic Route Network comes into force
Starting at 6 am on Wednesday, July 24, the Transport Department of London declared that “London has now become an Olympic City”. That sure sounds dramatic, but it now means that the Olympic Route Network (ORN) has came into force. The ORN includes 30 miles of Games Lanes, which are barred to the general public. Transgression can cost as much as 130 pounds. The ORN, which is a general practice in all cities for the duration of events like Olympics, Asian or Commonwealth Games, aims to make the transportation for Olympic family, which includes athletes, officials and media, easier, but it causes great misery for the locals, leading to delays, re-routings and even suspension of traffic in some areas.

Family affairs
There are two sets each of brothers and sisters in the tennis draw and they could well be on the podium.

Twins Bob and Mike Bryan, of the US and bronze medallists in 2008, are top seeds this time. Also in the draw is the Scottish pair: Andy Murray, Wimbledon singles finalist, who plays with his brother Jamie.

Venus and Serena Williams, the defending champions, are heavily favoured, as they gun for a third Olympic gold together. They also won gold in Sydney in 2000. Venus also won the singles gold in 2000. Serena won her Wimbledon singles title earlier this month and both sisters also figure in singles at Olympics.

The sibling count should have been up to five, but Alona Bondarenko was forced to withdraw from the Olympics due to injury. Her younger sister Kateryna will still represent Ukraine in women’s singles.

Making London safe for all
The Mozart Gang, the Page Street Boys, the Lisson Green Gang and the Church Town Militants. These are neither social groups, nor music groups but notorious gangs in London. And on the eve of the Games, the Police have cracked down on about 15 gang leaders in Central London, according to local media. Some of these gangs are suspected to be involved in drugs trade and the police claimed they had discovered huge amounts of cocaine and cash in the raids. The operation interestingly was codenamed Gabrim, after a knight in a sci-fi fantasy painting.

Tweets by @forbes_india
Paul Deighton: It's Vital To Let People Feel They Are Part of the London 2012 Games
How to Fix Our Cities