The 500th death anniversary of da Vinci is due this fall, and New York's Met museum will run a single-painting show starting Monday. "Saint Jerome Praying in the Wilderness," on loan from the Vatican museum, is an unfinished, raw, emotional work, and lets us see Leonardo's distracted, stop-and-start painting method in action 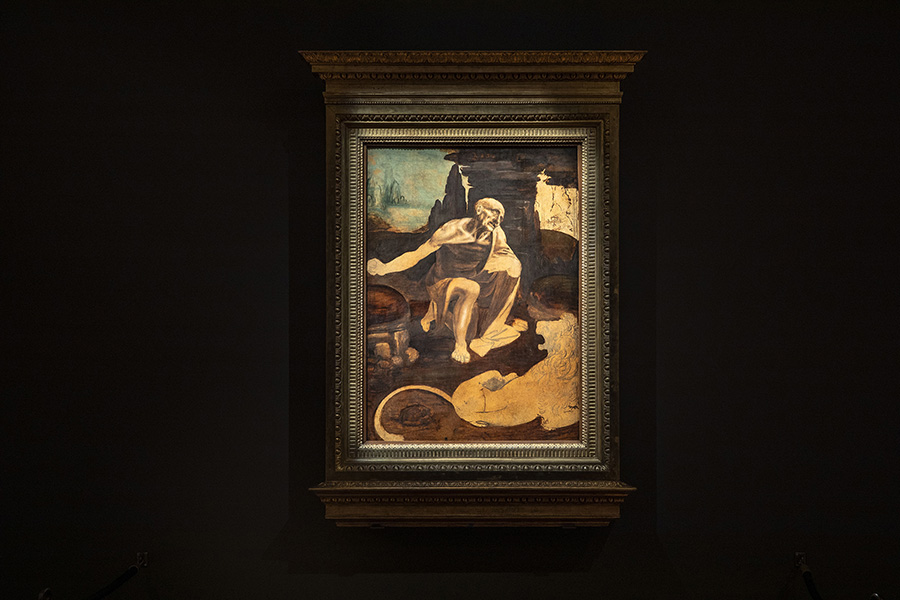 Leonardo da Vinci’s “Saint Jerome Praying in the Wilderness,” on loan from the Vatican Museums, at the Metropolitan Museum of Art in New York, July 8, 2019. The painting, probably begun around 1483, is a masterpiece in progress from da Vinci, a perfectionist who hated to say “done,” The New York Times critic Holland Cotter says. (Brittainy Newman/The New York Times).

NEW YORK — The 500th anniversary of the death of Leonardo da Vinci will bring big doings to Paris this fall with the largest-ever and one-stop-only career survey at the Louvre. And New York gets a shot of buzz in advance with the opening at the Met on Monday of a single-painting show of one of the most rawly emotional images in the Leonardo canon.

Leonardo was a star from the start. According to 16th-century art historian Giorgio Vasari, his contemporaries found him terrifically attractive. (Vasari calls him “divine” a dozen times in a 20-page Leonardo biography.) Genial, gorgeous, brainy and a fashion plate (partial to pink), he had the poise of a prince and a philosopher’s ruminative mind. In his long career as artist, architect, scientist and inventor, grace and talent combined to smooth his path from rural Tuscany, where he was born in 1452, to the courts of Milan and papal Rome, to France where, as pet artist to Francis I, he died in 1519.

But that ruminative cast of mind caused problems. Basically, before Leonardo did anything he had to know everything: how his paints and varnishes were made, how the human body was internally structured and what creating art might mean in the cosmic scheme of things.

This entailed, Vasari notes, research, experimenting, lots of conversation, and long stretches of silent thinking and rethinking. In the biography, he has Leonardo himself explain, for the benefit of an importunate patron, that “when the greatest geniuses are working less they actually accomplish more.” The net effect was that relatively little painting got done, and a lot of what got started was never finished.

The painting at the Met, “Saint Jerome Praying in the Wilderness,” on loan from the Vatican Museums, is one of those unfinished pictures. It was likely begun around 1483, and you see instantly that it’s a work in progress: fined-tuned here, slapped down there. Incompleteness is part of its power. And powerful this picture is, as dramatically rich as a three-act opera, with a full-throttle aria of scorching anguish at its center.

The picture is one of a dozen or so works widely accepted as being, without question, from his hand. It depicts an early Christian saint who, after a self-punishing stint as a desert ascetic, settled for years in Rome, where he turned his attention to translating the Bible from Hebrew and Greek into Latin. Many Renaissance paintings of Jerome (A.D. 347-420) show him immersed in this scholarly labor, usually accompanied by a snoozing lion, a kind of emotional support companion. The mood of such pictures tends to have a cozy Peaceable Kingdom vibe.

Leonardo’s painting does not. Here saint and beast alike are untamed. This is the Jerome of desert wildness, or maybe the one who ended up dying far from Rome in a rock-hewn cave near Bethlehem. Aged, nearly toothless and sun-scorched, he holds a stone in his extended right hand, as if about to deliver a penitential blow to his chest. At his feet is the lion, sleek, alert, tail curled like a scimitar, mouth opened wide in a growl.

We know nothing about why, or for whom, the picture was made. Carmen C. Bambach, the Met curator who organized the exhibition, proposes that it was started soon after the artist relocated from Florence, Italy, to Milan. Although it reflects Leonardo’s Florentine style — and there’s a tiny sketch of what could be a Tuscan church in the upper right corner — it’s painted on a panel of walnut, a wood commonly used as a support in Milan but very rarely in Florence.

Conservators have found evidence that Leonardo left off work at an early point and picked it up again, possibly more than once, later. Standing in front of the picture, which hangs, spotlighted, in a darkened gallery in the Met’s Lehman wing, you can get a sense of restless layers of activity.

In some areas it never progressed beyond a preliminary stage. The lion, a tawny silhouette with washy internal detailing, is a compositional place marker. The same is true of Jerome’s unmodeled rock-holding arm. But beginning just below the shoulder, this changes. Flesh suddenly gains shading; musculature develops. This naturalism spreads to the face, a construction of sinew and bone that brings Leonardo’s autopsy drawings to mind.

Even within this clinical precision, though, certain features are hard to read. At a glance, the saint’s eyes seem to be sightless or downcast. In fact, they are directed upward to a fleetly sketched, apparitional image of a crucifix seen in profile.

And, enchantingly, just behind the saint, a misted landscape appears, bringing the refreshment of color — sky-blue, tree-green — to a penumbral scene. In the exacting depiction of Jerome’s face and torso we see the hand and eye of Leonardo the anatomist. In the landscape, we see the naturalist, the botanist, the weather watcher, the world lover. It may say something about this love that we find traces of the artist’s fingerprints in the landscape passage where he dabbed and smooshed paint by hand to create a soft-focus atmosphere.

Still, the painting’s real focus is Jerome’s agonized face. And its real subject, to my eye, is inflamed spiritual grief.

What we know is that Leonardo kept the picture with him till he died, then another history took over. The work drops from the record until the late 18th or early 19th century when Swiss painter Angelica Kaufmann (1741-1839), then living in Rome, acquired it. At some point, pieces were cut from the panel — probably with the idea of selling the more finished sections — and later reassembled. At the Met, thanks to raked lighting, you can see repair lines around the saint’s head.

Why Leonardo left this and other pictures unfinished, we can’t know. Bambach, who organized the Met’s 2003 Leonardo drawing survey and whose awesomely ambitious four-volume study of the artist called “Leonardo da Vinci Rediscovered,” will appear later this month, suggests that the answer may lie in his relentlessly inquisitive personality: In a now-familiar internet way, every search for information he made turned up links to other searches, which he couldn’t resist pursuing.

And in this she’s in agreement with the forgiving Vasari, who wrote: “Leonardo’s profound and discerning mind was so ambitious that this was itself an impediment; and the reason he failed was because he endeavored to add excellence and perfection to perfection. As our Petrarch has said, the desire outran the performance.”

The result, both historians seem to suggest, is an art that, consciously or otherwise, privileges process over finish, experimentation over resolution: Never having to say “done” was Leonardo’s comfort-zone mode. And in the case of the Vatican painting, this has a fantastic payoff: It leaves an expression of fever-pitch emotion ever burning. It will burn all summer, this furnace of anguished devotion. The Met better keep its air conditioning on high.