Through a sardonic short film 'Kadvi Hawa Badlo', GAIL (India) seeks to sensitize people on the effects of climate change... 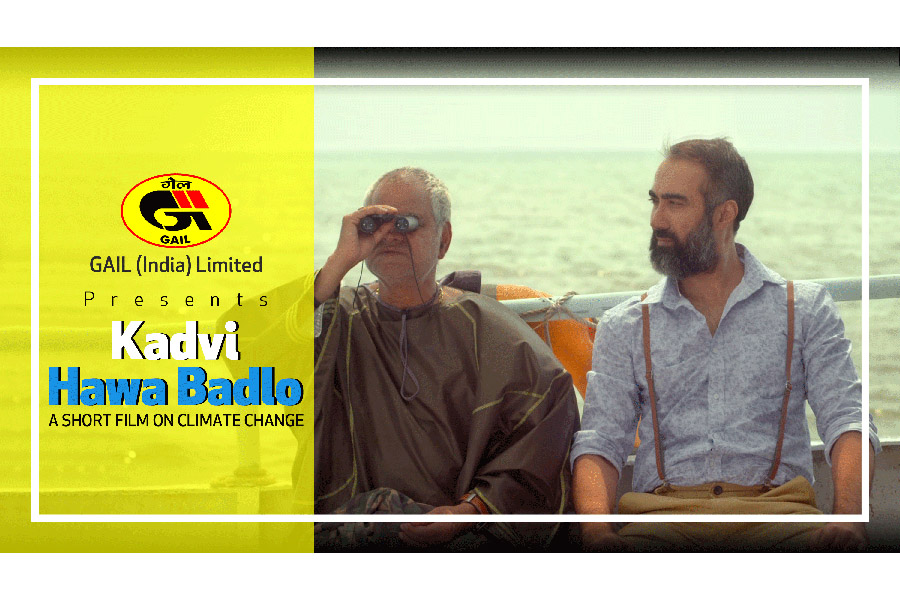 The highly impactful short film – Kadvi Hawa Badlo, featuring Sanjay Mishra and Ranvir Shorey, begins with the two artists aboard a tourist barge in the midst of an ocean. It’s well past the year 2020. They strike up a conversation, as two co-travellers often do. Mishra, playing the role of a reminiscing elderly man tells the young, NRI played by Shorey, about the legendary under-water city that they are cruising above. Young Shorey half dismisses it as a myth but admits that he is there to see the home of the famous Amitabh Bachchan… And that’s when the viewer realises that the fabled under-water city is none other than Mumbai!

The film, presented by GAIL (India), goes on to briefly present the viewer with grim facts and figures that suggest that the emission of air pollutants, especially CO2, is a direct cause of climate change, which could lead to rising sea levels and the flooding of hundreds of cities around the world. In fact, it concludes that 40% of Mumbai could be submerged in the next 100 years!

Stark Reality
One of the biggest threats of climate change is the increase in carbon emissions, which is leading to a rise in temperatures. This, in turn, results in the melting of continental ice glaciers, paving the way for a rise in sea levels due to the thermal expansion of sea water. A scientific report by Climate Central, a US-based research group, once suggested that if greenhouse gas emissions continue unchecked, significant parts of cities may be submerged under water in the future.

Explaining the motivation behind the film, Gajendra Singh, Director (Marketing), GAIL (India) Ltd said, “Emissions of air pollutants, especially CO2, by burning polluting fuels is a direct cause of global warming. Global warming is leading to rising sea levels and increasing coastal flooding, endangering 40% of the world’s population. Our intention is to sensitize people about air pollution and motivate them to inculcate eco-friendly habits such as switching to cleaner energy sources, like Natural Gas, carpooling, planting trees and using of public transport. Bringing about these changes towards reducing pollution must be a continuous process. Let’s strive to do it together. We believe that these changes will impact the environment positively.”

Protiqe Mojoomdar, the Executive Producer of this film from Handyyman remarks, “It is rare that an entertainment brand like Kadvi Hawa and a Public Sector brand like GAIL India are endorsing the exact same and the most important philosophy of our times! Air pollution and climate change are reciprocal disasters that have become the reality of today. It was therefore an honour to leverage this association, and create this short with such talented actors! #Kadvi Hawa and #Hawa Badlo came to become #Kadvi Hawa Badlo. The bitter truth bullet needs to be bitten now and this our small effort to motivate everyone.”

GAIL (India) Limited, as an extension of the Hawa Badlo campaign, has also joined hands with the upcoming Bollywood movie, Kadvi Hawaa as Clean Energy Partners. This association is in line with their commitment to improving the air quality through collective societal effort under its Swachh Air Mission.

GAIL’s Hawa Badlo Campaign
GAIL is committed to improving the air quality with collective societal effort under its initiative - Hawa Badlo - Swachh Air Mission. This campaign seeks to unify people who believe in the cause and urges them to sign up as Hawa Badlo warriors to physically execute initiatives and take steps towards positive change. It is further envisaged that these Hawa Badlo warriors will encourage more and more people to make this movement a sustainable one.