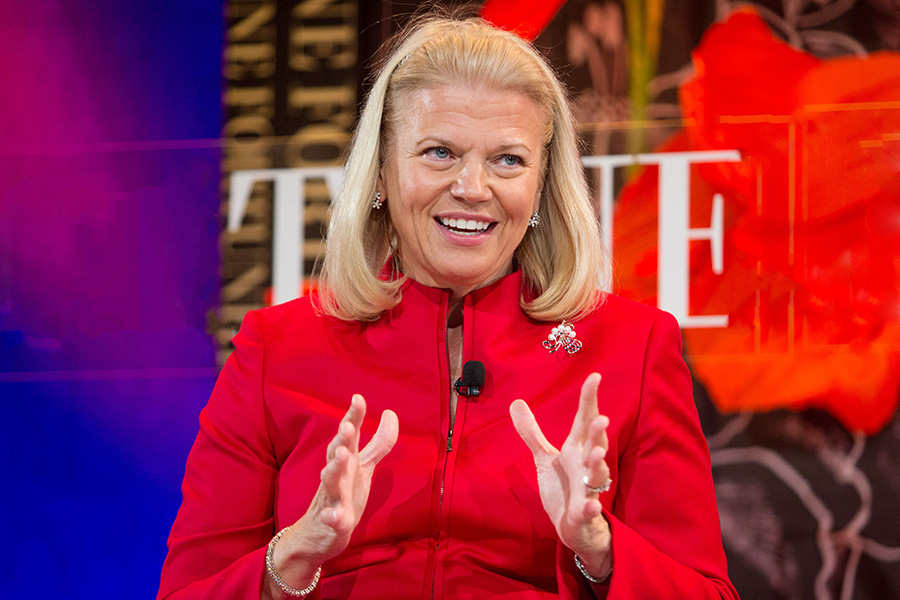 How do you steer a century-old tech giant so it innovates as quickly as a startup? That’s the challenge that Ginni Rometty, the chairman, president, and CEO of IBM, faces. As Silicon Valley grows, spawning new, nimble companies that are barrelling into all of IBM’s major businesses, Big Blue has to fight back using its decades of experience.

Ginni Rometty got her start working on trucks and buses at General Motors, which gave her a scholarship to attend Northwestern as long as she worked for the automaker in the summers. After two years at GM, Rometty joined IBM, where she’s been for nearly four decades, starting as a systems engineer and later working in engineering, sales, research, and finance. She took IBM’s top job in 2012.

She’s pushed the company to innovate — 45% of IBM’s current products launched in the past two years — and to focus on important problems. The Watson AI system, known popularly for its Jeopardy! victories, is analyzing big data to improve cancer treatments. The company has continued its move into the cloud and into blockchain, which “will do for trusted transactions what the internet did for information,” she says.

At a recent View From The Top talk at Stanford Graduate School of Business, Rometty spoke about how a big company can think like a startup, why technology companies need to build trust, and why AI should really stand for “Augmented Intelligence.” Here are some of her thoughts.

Purpose Matters
It’s a Silicon Valley cliche to say your company is changing the world or making the world a better place, but for Rometty, one key reason why she’s continued working at IBM all these years is because of the sense of purpose she found there. She always felt that “IBM had a purpose in this world, and that this world would be different if it wasn’t for IBM,” she says. For instance, the company is working to solve problems in health care, including using Watson, which she finds motivating and hopeful.

“In addition to being passionate, I feel really strongly, whatever you go do, do something with purpose,” she says.

Building Tech Responsibly
Tech companies in particular have an obligation to practice what Rometty dubs “responsible stewardship” of their ideas and products. It’s crucial to make sure that the technology you build helps people and doesn’t harm them by, for instance, perpetuating inequality.

IBM has always had an ironclad policy not to give governments secret access to its products through backdoors and always to uphold its mission of transparency, she says. “Our license to operate was based on trust.”

AI + People = Augmented Intelligence
A longtime specialist in artificial intelligence, Rometty led the team that prepared Watson for commercial use, which she sees as key to IBM’s sustained push into using computing power to solve problems. The future of work, she says, will depend on harnessing machines to work alongside humans. “We’ll solve so many great problems, but this will be a world of man and machine,” she says. “And so they’re going to have to work together, and that is going to mean a lot of change.”

For AI to achieve its potential, she says, it’s important that people understand what goes into the algorithms and how the machines are trained — especially when the computers are making decisions about such crucial areas as health care. Customers should understand how machines make decisions, she says.

Starting Small to Innovate
Innovation is hard to manage in a company the size of IBM, which has nearly 390,000 employees. Rometty had to learn that she couldn’t make innovation happen by pushing her staff to work faster. Instead, IBM had to change how it developed products by building small, minimum viable products. “Start with something little, get it right, make it bigger, make it bigger,” she says.

But being innovative also means asking employees to learn new skills, which Rometty approaches in three stages. First, she says, you have to paint the picture of where the company is heading. Then you have to compensate employees for learning these new skills to help the company get there. Finally, she says, you must reinforce the process by rewarding those who put in the time. “You’d be surprised,” she says. “People will move. This has nothing to do with age. I think the most distinguishing characteristic is your curiousity. If you are a lifelong learner, I would like you.”

Tweets by @forbes_india
Can cycle renting take off in India?
Mental fitness of our youth: An urgent need to address